The Meaning of a Place Name

How looking at the roots of the old words for the hills and other places in the landscape around us, can bring us into closer touch with our surroundings. 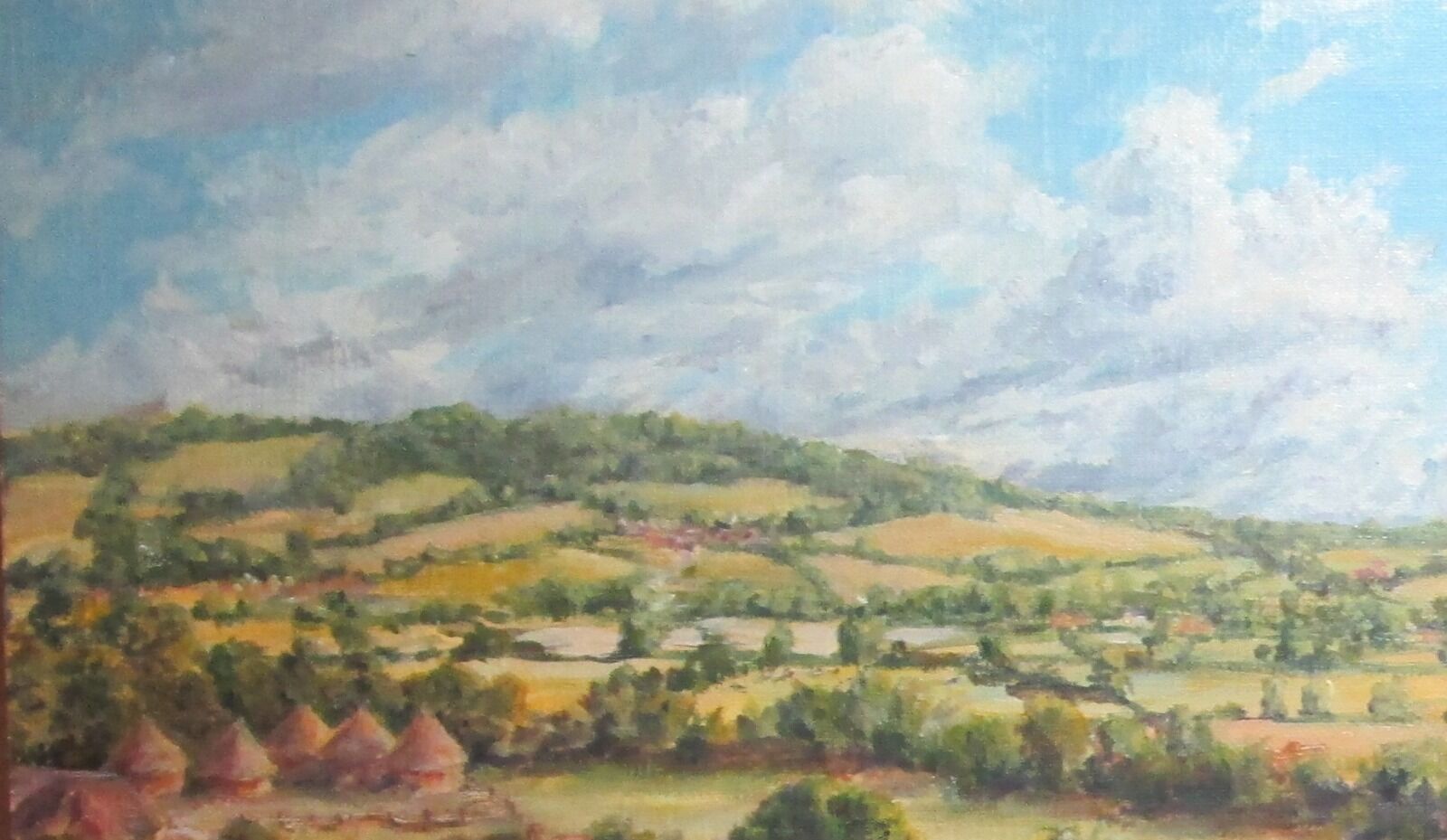 A distant Sussex Hill (Eastdean) in a recent painting. Does this name contain the 'dun' element, that has so many complex contexts?
If we don’t pay a lot of attention to the subtleties of the shape or meanings of hills these days, there is little doubt that our forbears did.

The evidence for this is sprawled, in writing, over the face of every map of every scale of this country, in the names that dot the map from top to bottom.

Once you notice them, I think one cannot help but be pulled in by their strangeness and puzzle over their meanings. They seem sometimes to be descriptive, often mysterious, and remarkably inconsistent.

If you have done this, as I’m sure many will have, there will have been a moment when a known local name suddenly became more resonant, as an idea of its likely meaning dawned on one. With it may have come a slightly warm feeling of connection with those of long ago who first (and probably inadvertently) created its name.

Inevitably, such thoughts have led me to study various references, to try and help decipher these names, which, after all, are often written in a half-lost language.

One of my favourite sources in looking at these names is Margaret Gelling’s excellent book, ‘Place-Names in the Landscape’. There are many other sources, such as the English Place Names Society’s ‘county books’, for example, which do make for an enlightening thumb through. To me, though, Gelling’s book seems to start out from an original and insightful stance.

That is, that place names need to be looked at alongside a careful and detailed study of local topography, a principle which she has clearly endeavoured to follow by close study of one inch maps. She suggests herself though, that in many cases, even this is not insightful enough and that often true meaning can only be understood by genuinely experiencing the place in the first hand.

Her other great and original insight is to look at the use of naming terms on a national, not just a local level, allowing her to spot patterns in usage that would not be clear otherwise, (for lack of statistically meaningful data), on a county level for example.

In doing so, she illustrates the clear use of very specific terms to describe very specific topographical features. What this brings out is just what a detailed and subtle appreciation of landscape features were being recognised in the (principally Anglo Saxon) vocabulary of the past, which largely still forms the nomenclature of the English landscape.

The naming of hills seems to be a particularly complex area. In Gelling’s book, the chapter on ‘Hills, Slopes and Ridges’ is the longest in the book even after (to quote her own words) “various omissions ... to keep the chapter in reasonable proportion”.

I can’t help but list a load of them here for the sheer fascination of them:

(I apologise to true scholars for the less than perfect recounting of them, quite a few have accents and other letter variants that represent the Old English better, but would take me ages to sort out how to depict all of these on the website.)

The use of each of them is not simple either, she devotes around 20 pages to just the use of one of the most significant hill terms- ‘dun’, in different geographical contexts.

I think the best illustration of the specificity of meanings that she manages to draw out of these names is shown by quoting a short extract about the term ‘ofer’:

“In English settlement names, ofer or ufer, is used for a site on the tip of a flat-topped hill-spur. There is frequently a level approach to the village along the high ground from which the spur projects, and there is often a steep drop on all other sides”

(Place-Names in the Landscape, Margaret Gelling, 1984)

What clearer illustration could there be to show the Anglo Saxon’s appreciation of the subtleties of a shape of a hill?

Did we lose that? Did we stop paying attention to the shapes of the land around us? I certainly think it is not so generally present in our current everyday consciousness. Perhaps we didn’t lose it entirely. Is it perhaps a dormant faculty in us, but one we all visit in ourselves from time to time: the need to feel connected to a place, to get to know it?

There are lots of ways that this process happens: When you have followed every different track in every direction, paused and contemplated its different views, sought shelter in its hedges, trees and buildings. Maybe one has even worked its lands, toyed with its soils in a range of tempers, puzzled the lumps and bumps of the way the ground lies. Sometimes it is a very small area, a garden, a street, one farm, or larger: a stretch of woods, a village, parish, a length of downland.

When one gets to know a place, an area, and I mean really get to know a place, not as in having just walked through it once, but maybe when you’ve walked it lots of time, it takes on a different aspect. Part of the pleasure is that you never do know a place completely. Like a person, a friend, you feel you know so well, but still capable of surprising or enchanting you with something you didn’t expect even after years of close acquaintance.

Maybe rooting out the meaning of the name of that place, hill or otherwise is another way of getting that connection and surprise from it.

Finding enchantment there, in the insightful, colourful and descriptive vocabulary of our ancestors.
Next
Previous