These unique and atmospheric Battle of Britain oil paintings commemorate the RAF's courageous defence of the skies over Britain during the long, hot summer of 1940.
This Gallery is intended as a tribute to the bravery, courage and sacrifice of all those who fought in The Battle of Britain to win us the freedoms that we value today. 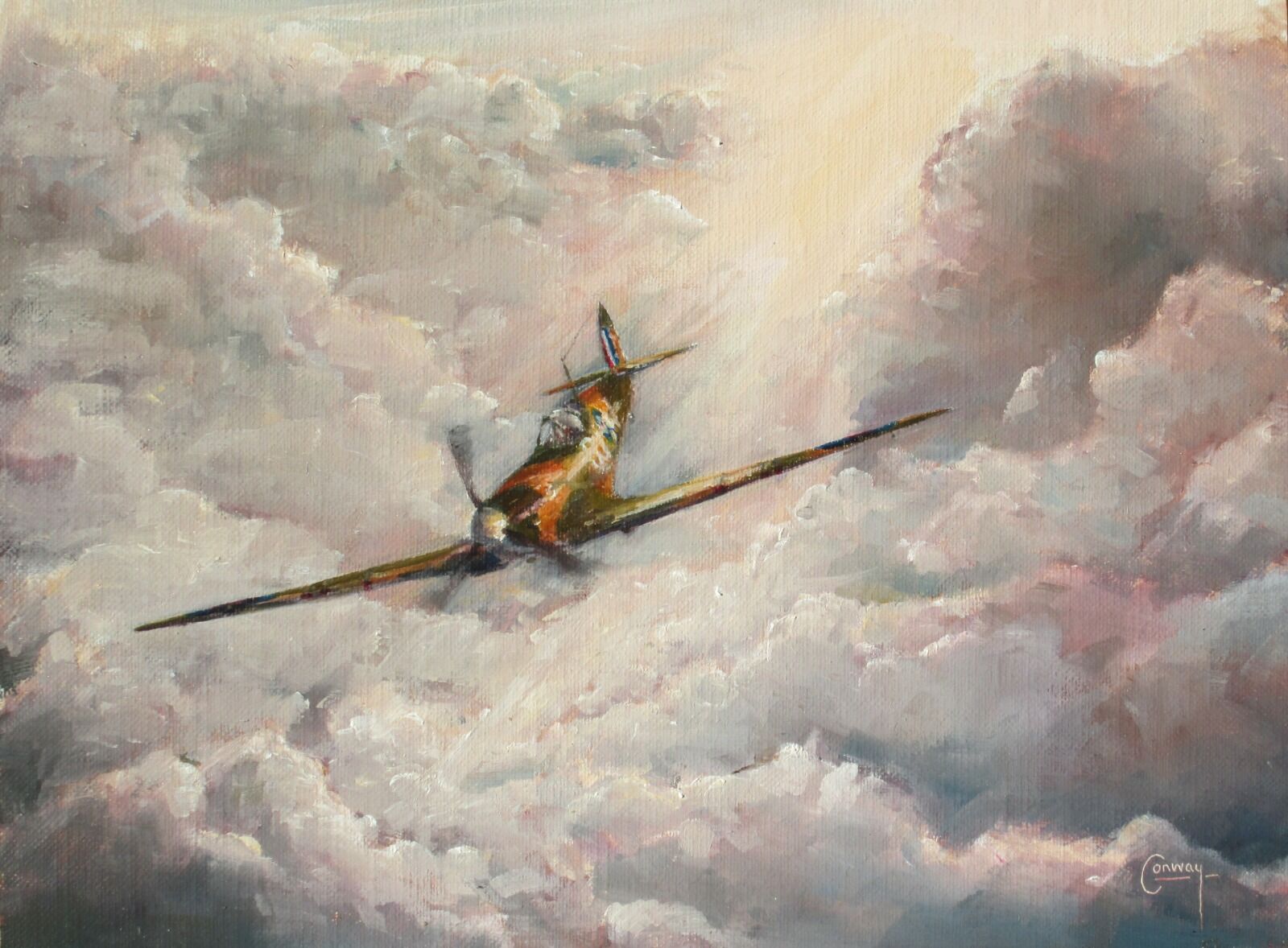 Looking back at the achievement of the RAF in the summer of 1940, it seems a most improbable victory. How did those pilots keep going and maintain such spirit, day after day, in the face of such odds and such risk?

The images of this conflict are perhaps now part of the national psyche. Faded black and white pictures of smart, smiling young lads, sprinting cheerily across airfields, briefly resting in cane chairs, joking around and playing cards before climbing back into their beautiful, gleaming Hurricanes and Spitfires to do it all over again and again.

For all the pervading strength of the images that we carry with us, there are really precious few pictures from the time. Living in the world we do now, the camera is just about always present and everything gets photographed. Yet these seminal four months of frenetic activity, when our history hung in the balance, seem to be mostly represented by a mere couple of hundred photos.

Perhaps this is a balance which aviation artists are best placed to redress. The more I paint this subject, the more I want to paint it. It seems like for every day, every encounter and every pilot who flew in combat, there is another artwork that deserves to be created as visual tribute. Yet such a task is clearly impossible.

So, for now, I have chosen another way in. The concept that started this, ‘Hardest Day Hurricanes’, was meant as a one off tribute for the 80th Anniversary of the Battle. By taking this one arduous day and trying to drill down into it, and create paintings that evoked the day, moment by moment, it seemed like one had some kind of chance of representing something meaningful about the Battle as a whole.

As an artist, I could see a story here that was more feasible to tell. By looking closer at just one day, I could see beyond the ‘headline images’:

As one dug deeper and deeper, one’s mind was drawn to thinking about what happened before and after the sprint across the airfield? What were all those other moments like? What did it feel like to be in these now fabled places and in those historic skies at this vital moment in history?

This is what my paintings came to be about.

The ‘before’ moments: From dawn, the moment where the fitter, who has been working half the night to repair a damaged aircraft, pauses from his work to watch the first section of his squadron scramble on an early convoy patrol, the sea mist still all around, at Martlesham Heath. 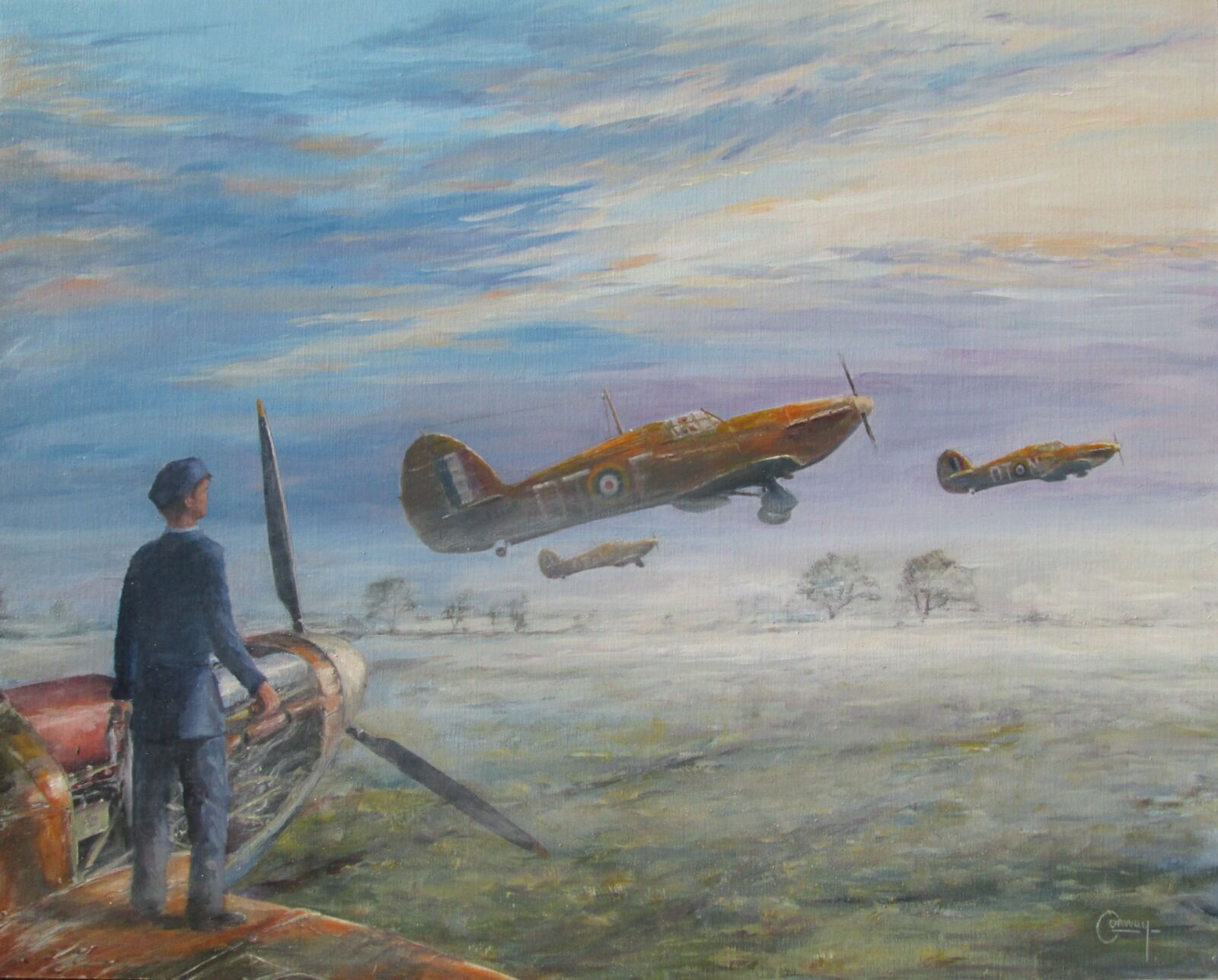 The quiet in the early light at Biggin Hill, after all the Merlin engines had been warmed up and the ground crew work on the last tweaks to ensure the aircraft are ready for another day. 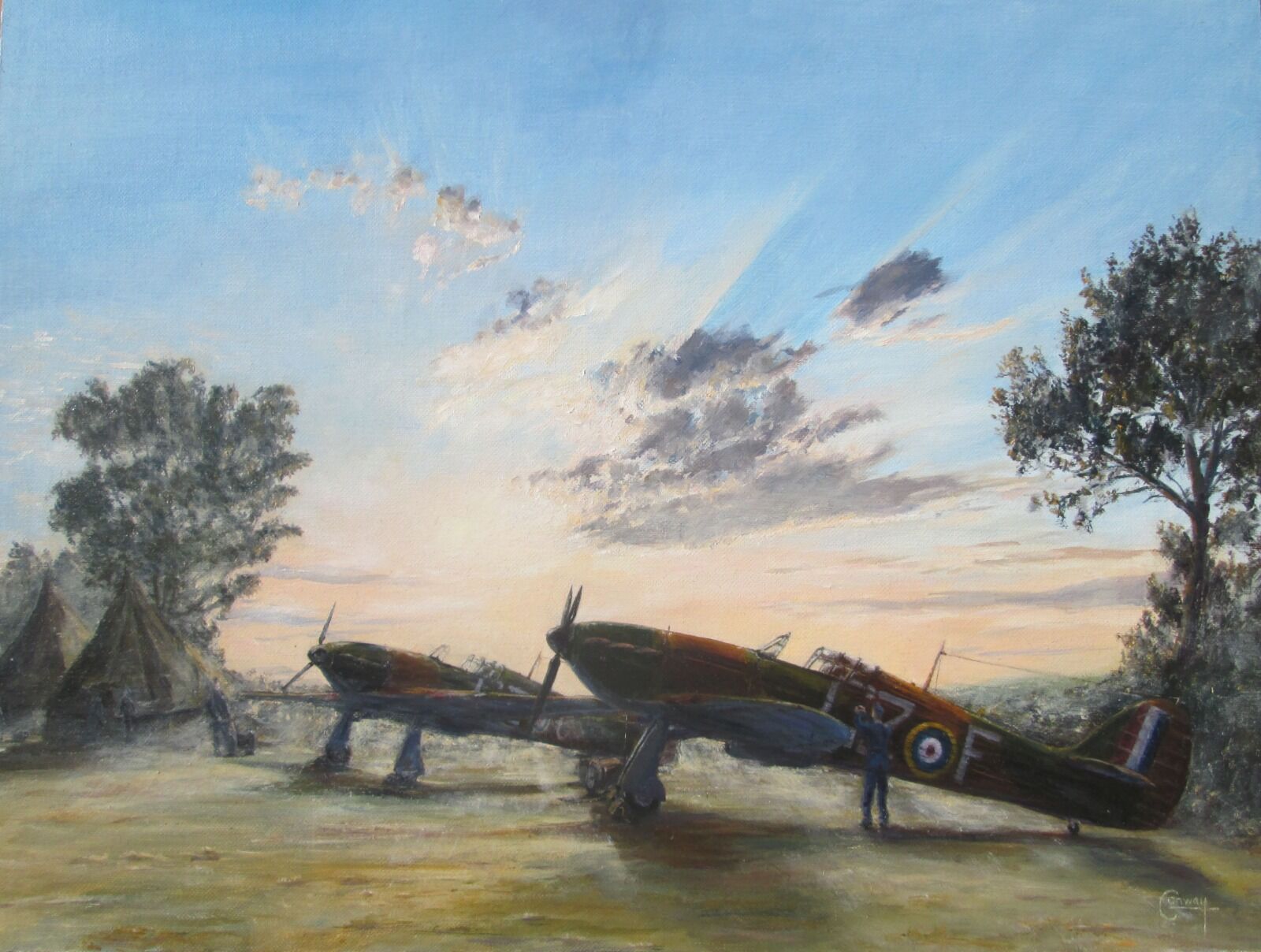 The earth-shattering roar of a whole flight at Northolt taking off together in the afternoon sun... 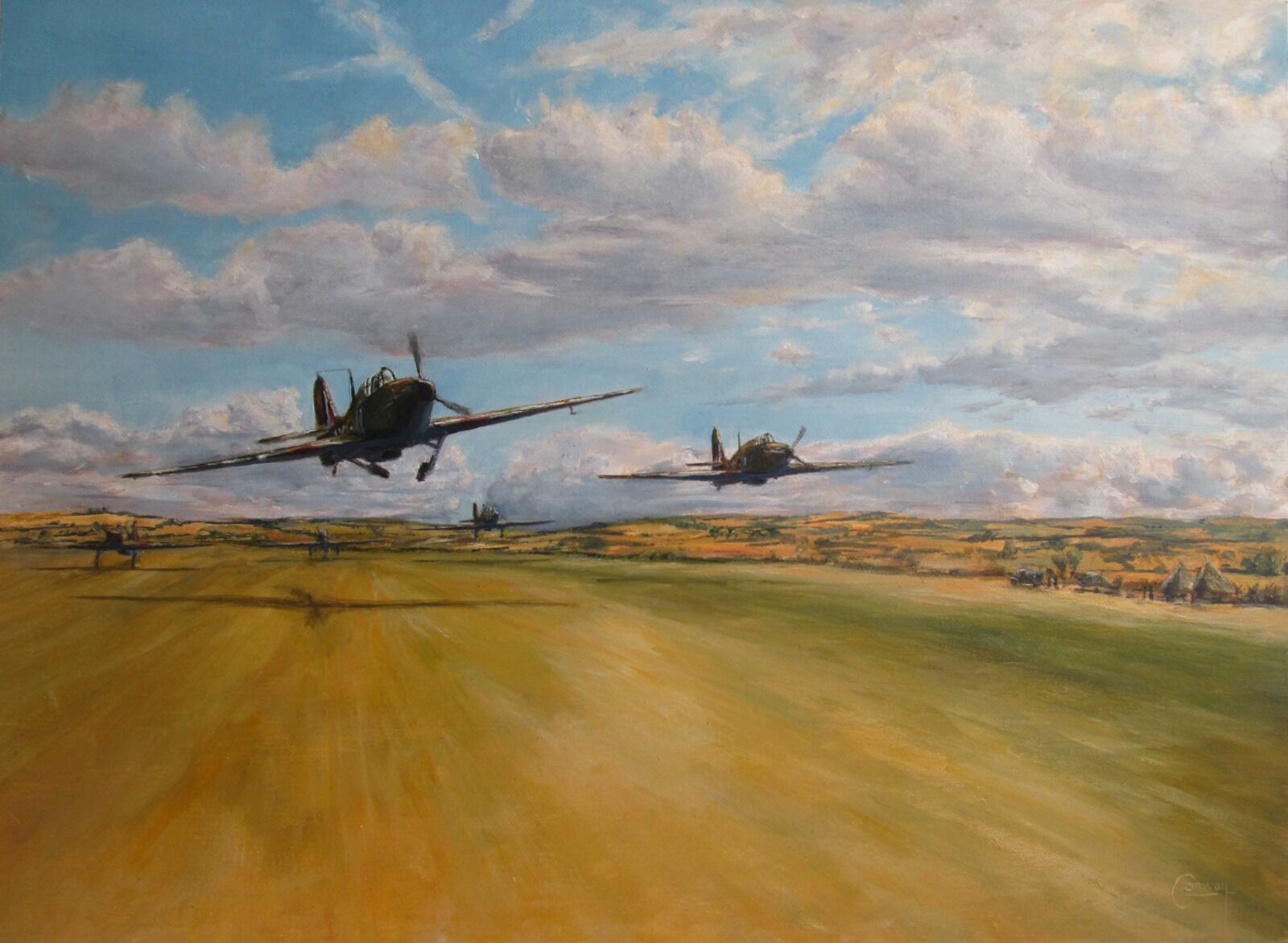 ... or 12 aircraft climbing, to defend, through an evening sky over quintessentially English countryside in Essex.

Then, there are the ‘just before’ moments: Turning to make a head on attack against a mass of enemy aircraft, two minutes to close with the distant specks of enemy bombers that will shortly be on the point of collision. 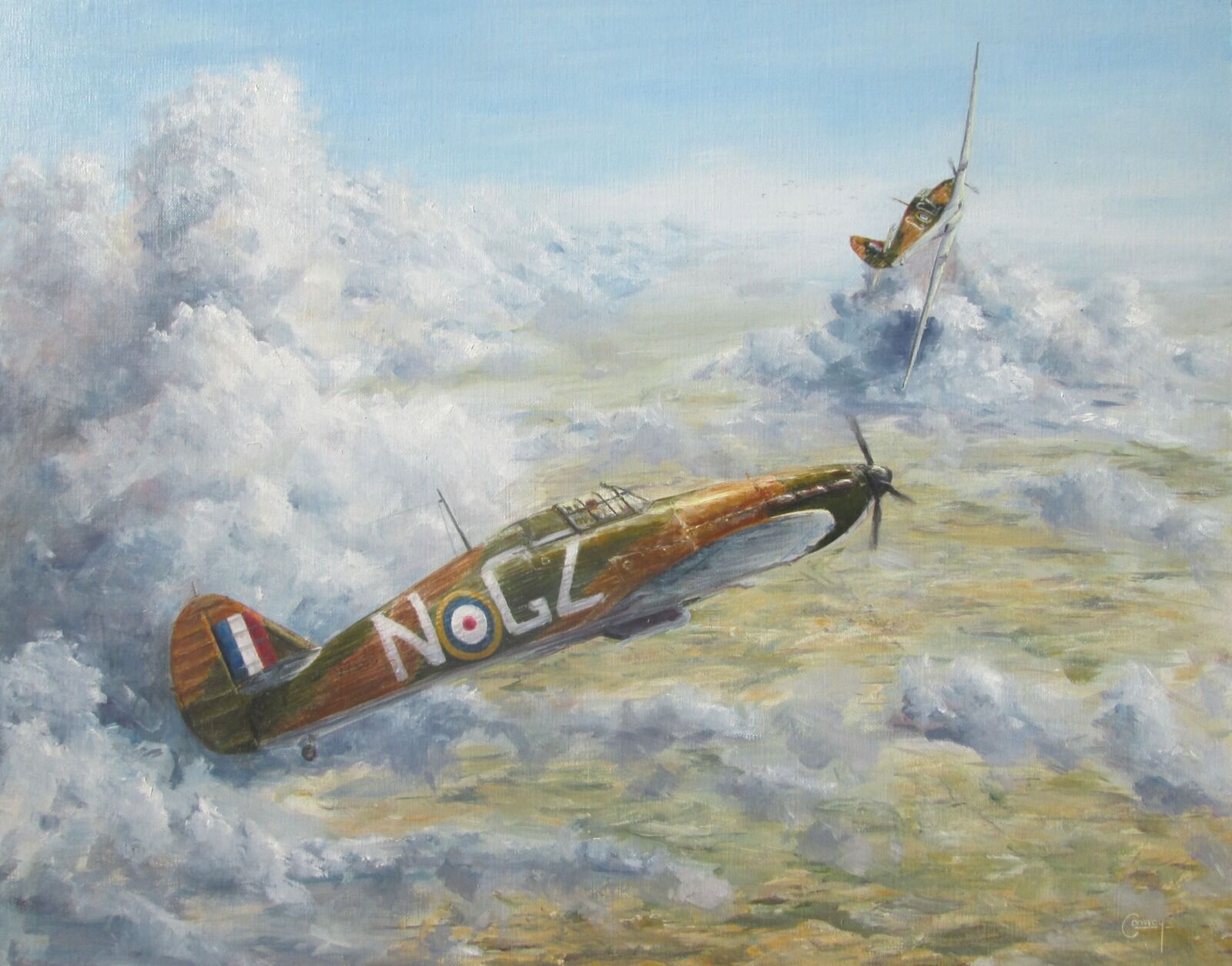 A pilot at Kenley scanning the sky, as he climbs to the cockpit to take off in a ‘survival scramble’ just before the airfield becomes a death trap of exploding bombs... 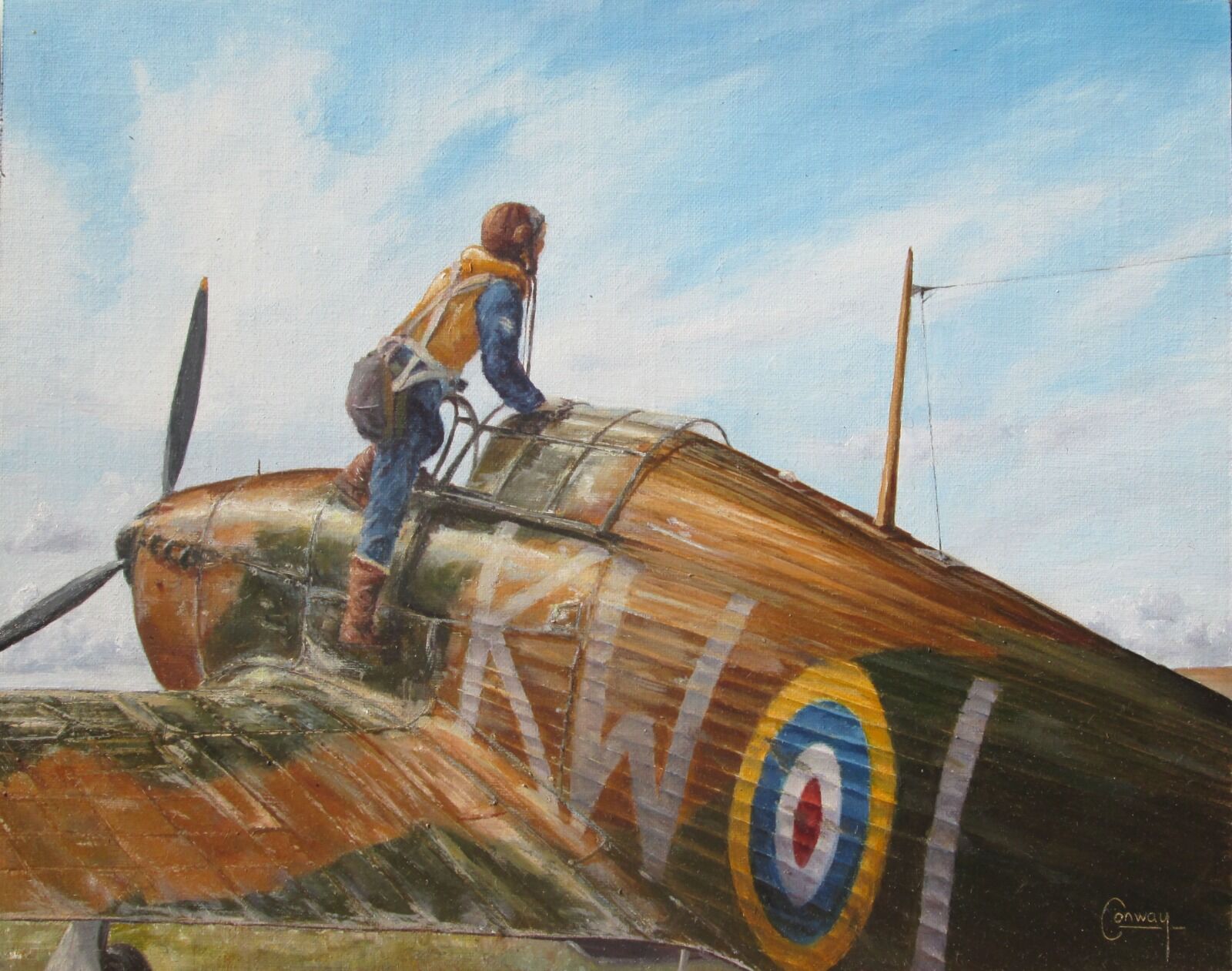 ... or the moment a Squadron leader half rolls to attack a couple of schwarme of Me109’s, not knowing, minutes later, he will be baling out of his stricken aircraft. 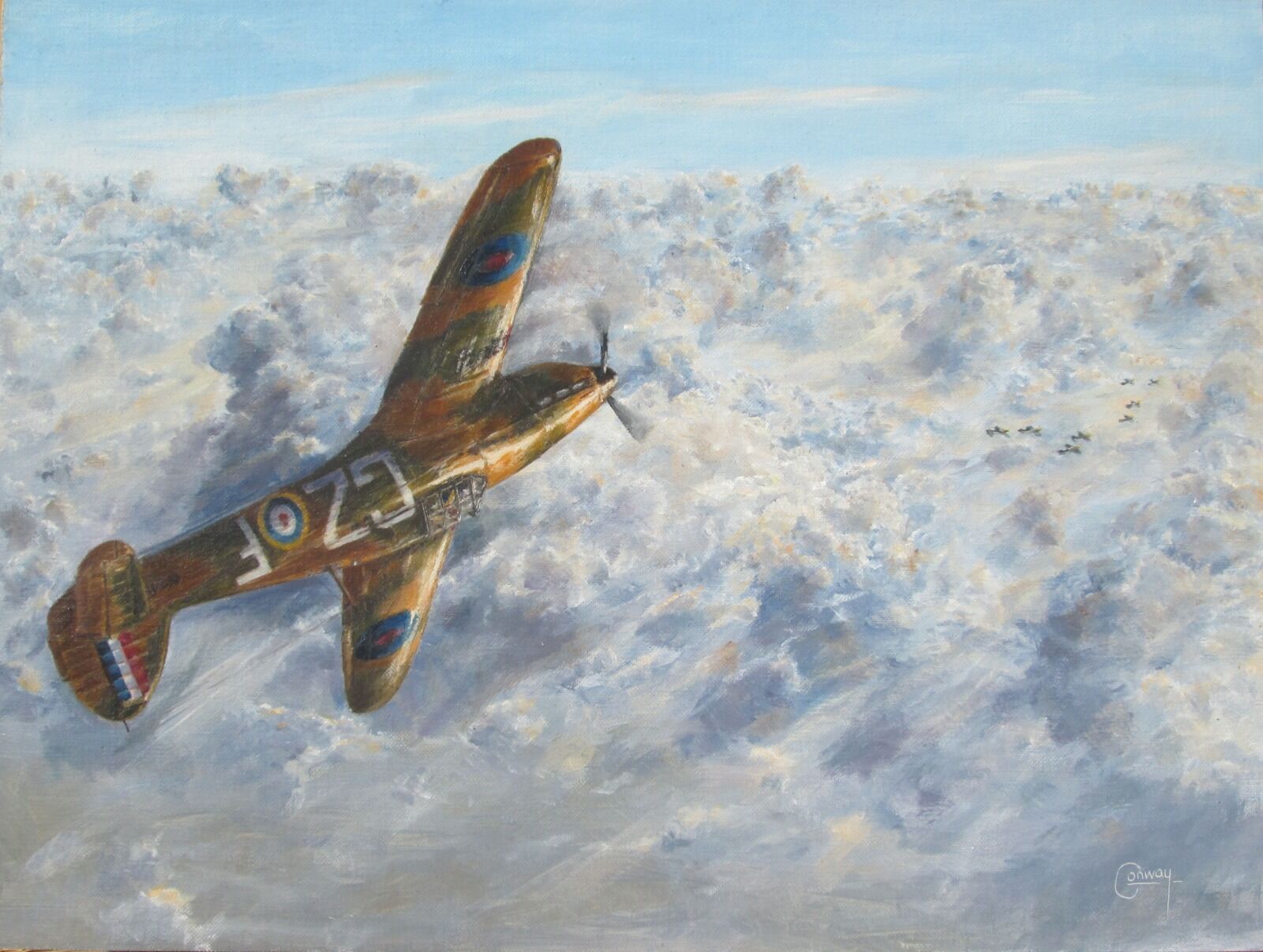 Two Polish pilots, defending someone else homeland from the fate their own has suffered, climbing together over the Thames Estuary. 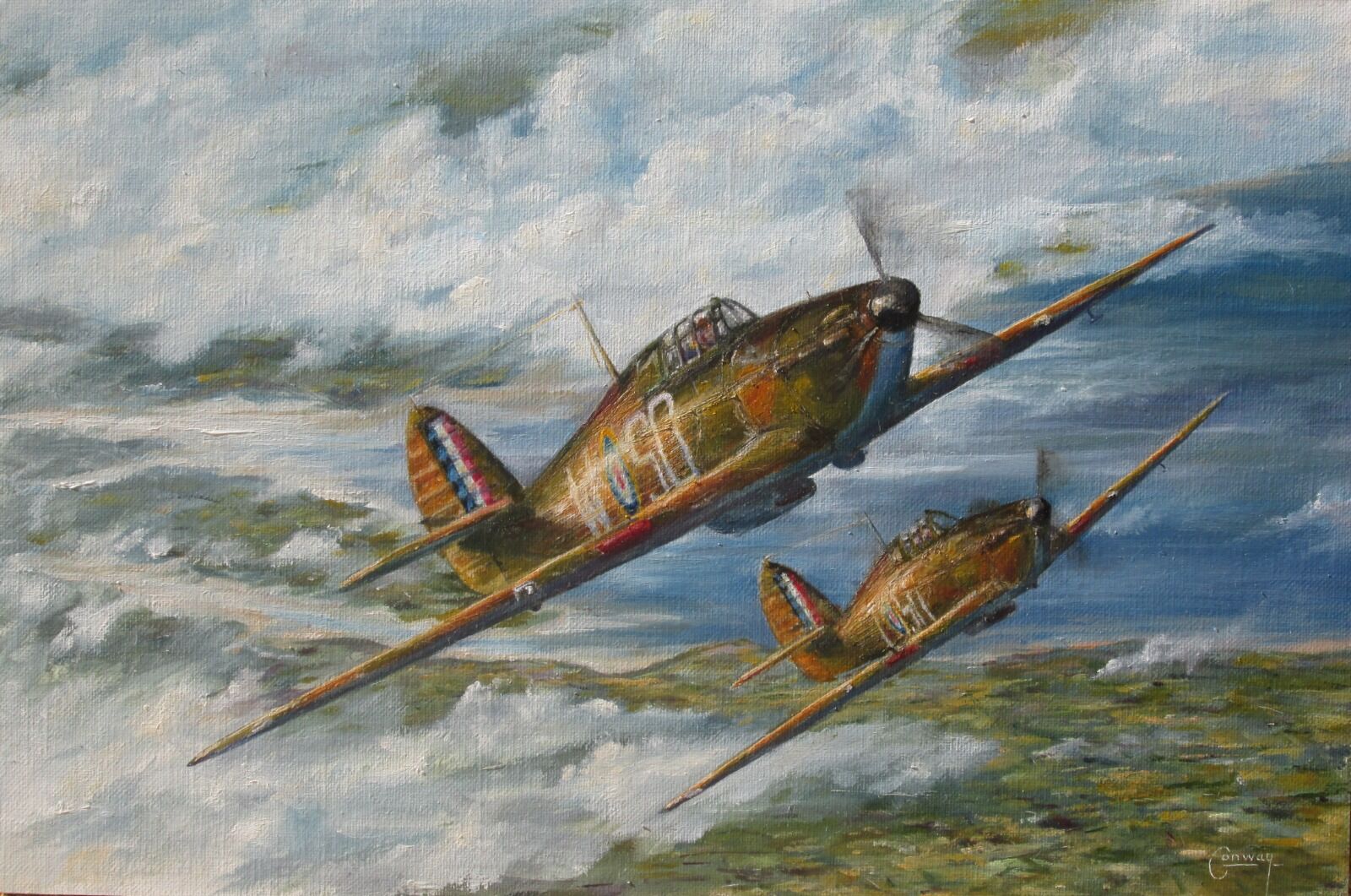 The ‘quieter’ moments too: Soaring over glorious evening clouds on a ‘no contact’ second sortie, after a venomous life and death struggle on the first... 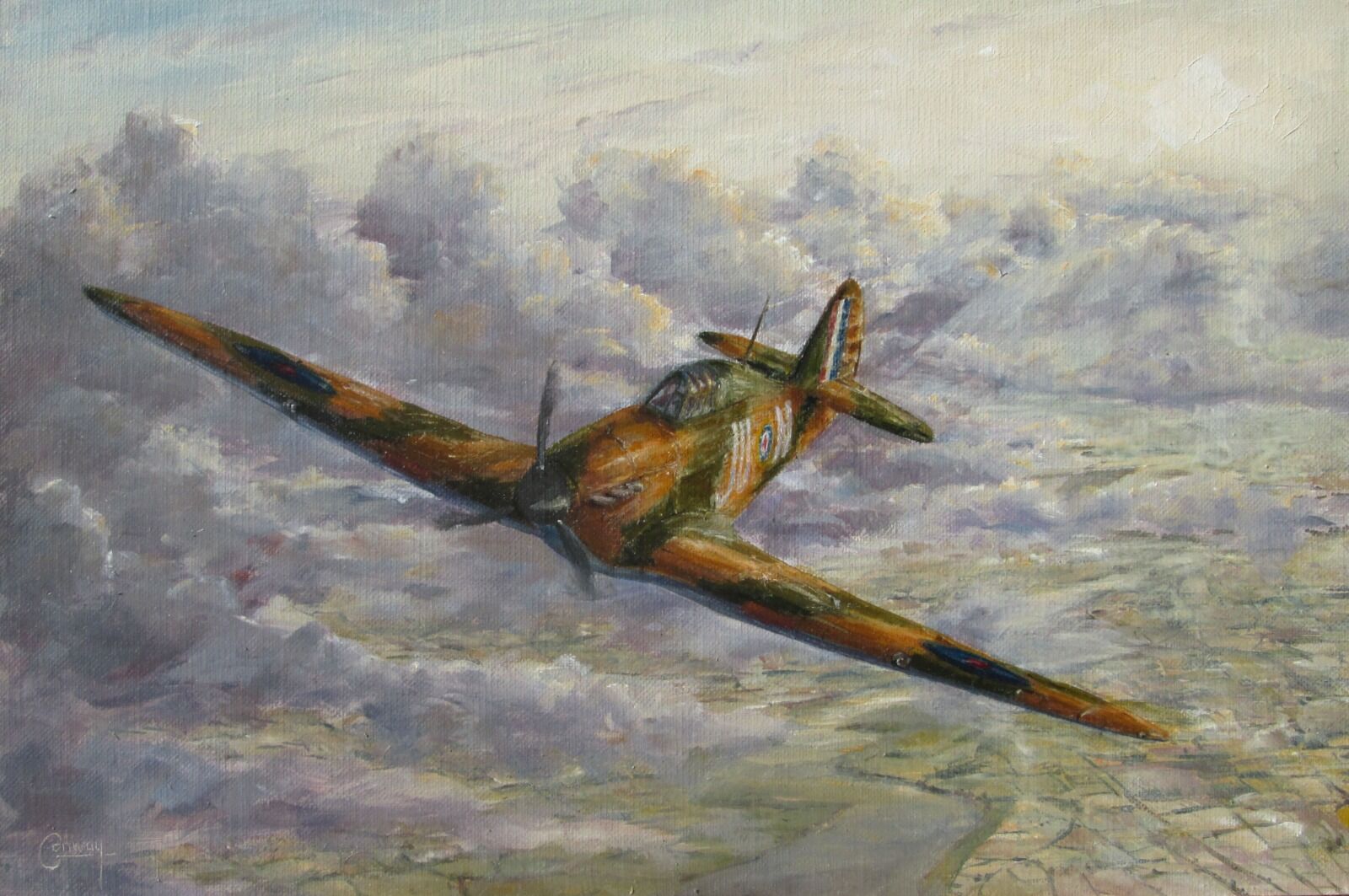 ... or being back with comrades over the white cliffs after an attack on a Dornier bomber turned into the closest of escapes from four vengeful Messerschmitts. 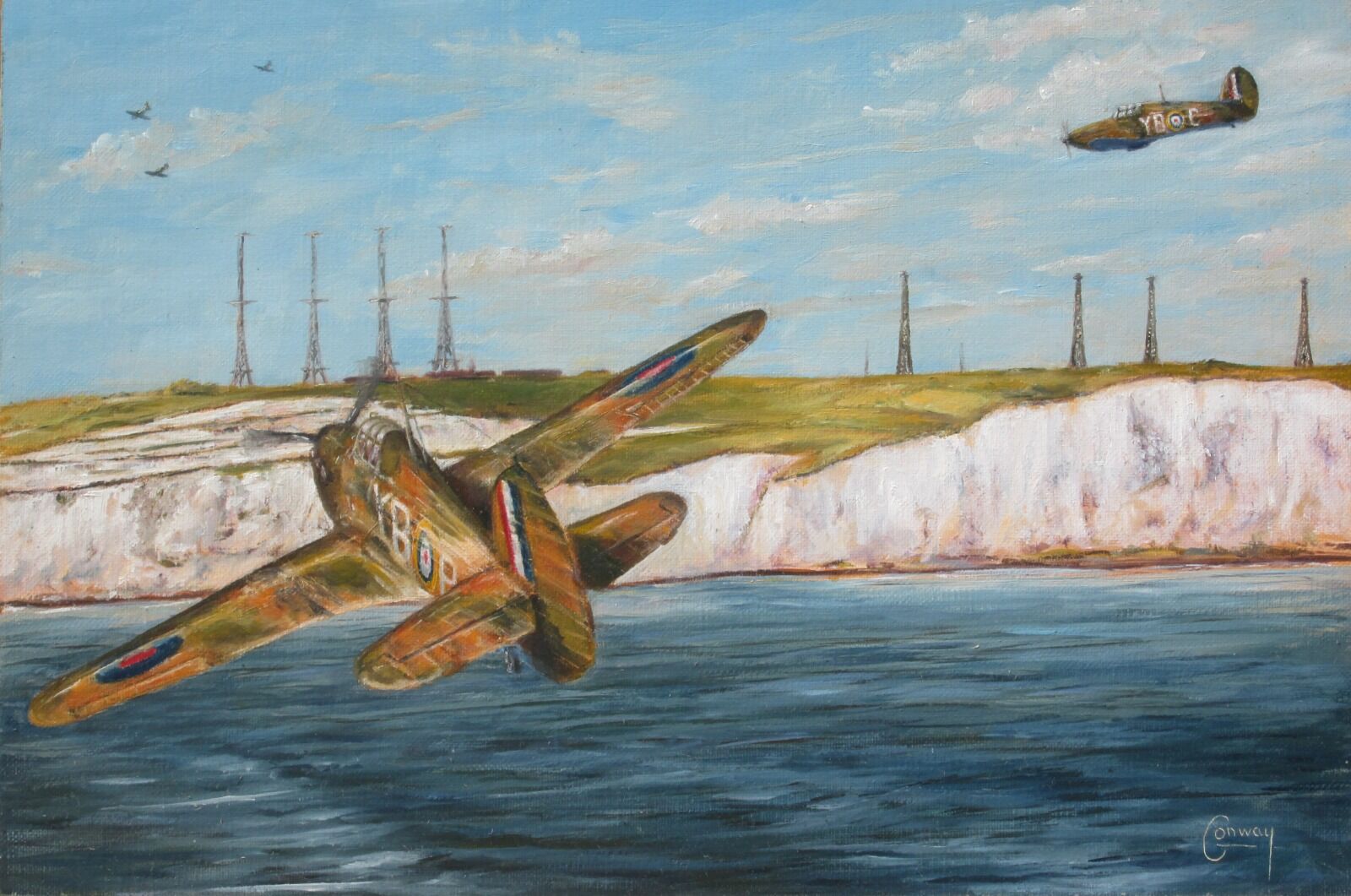 Then ‘being in the thick of it’: In the flick of an eye, a Hurricane slices past a He111, pushing an attack home, noting the menacing curving flight of the avenging enemy fighters bearing down. 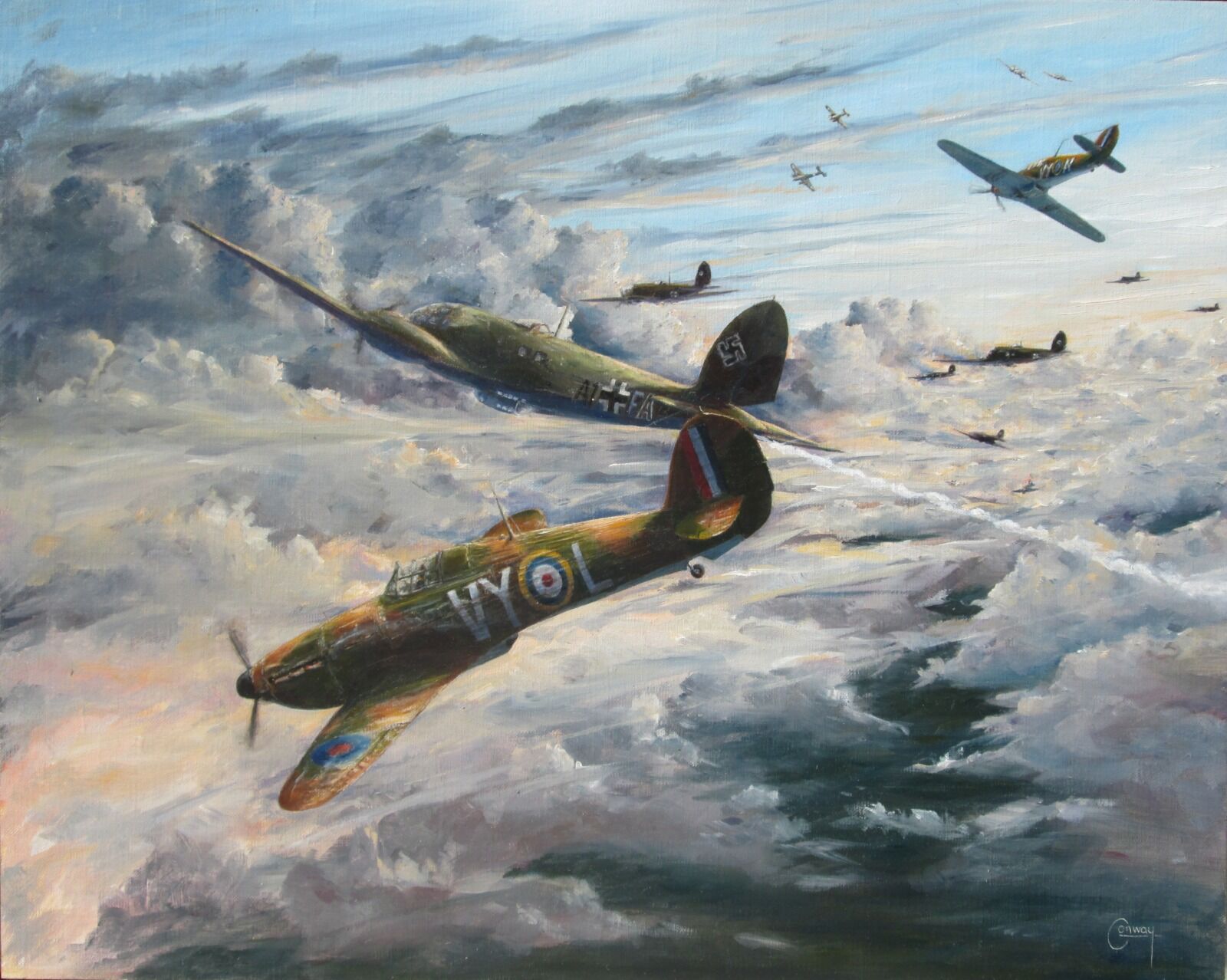 A WAAF dodges through smoke and rubble at Biggin Hill to mark locations of unexploded bombs, so ‘the boys’ can touch down safely. 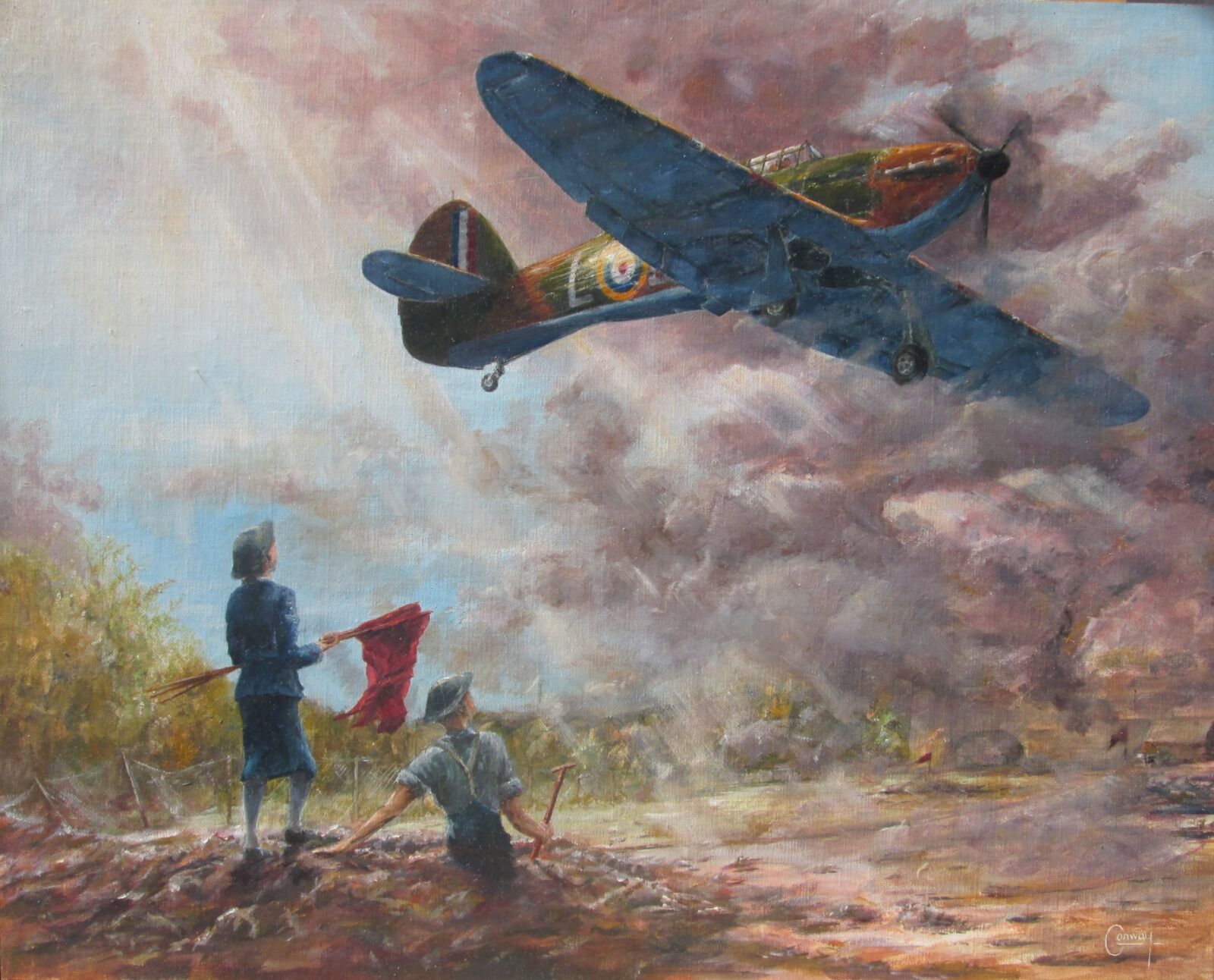 The moment the Squadron breaks through low cloud to attack a line of dive bombers before they unleash their deadly cargo over the Sussex coastline. 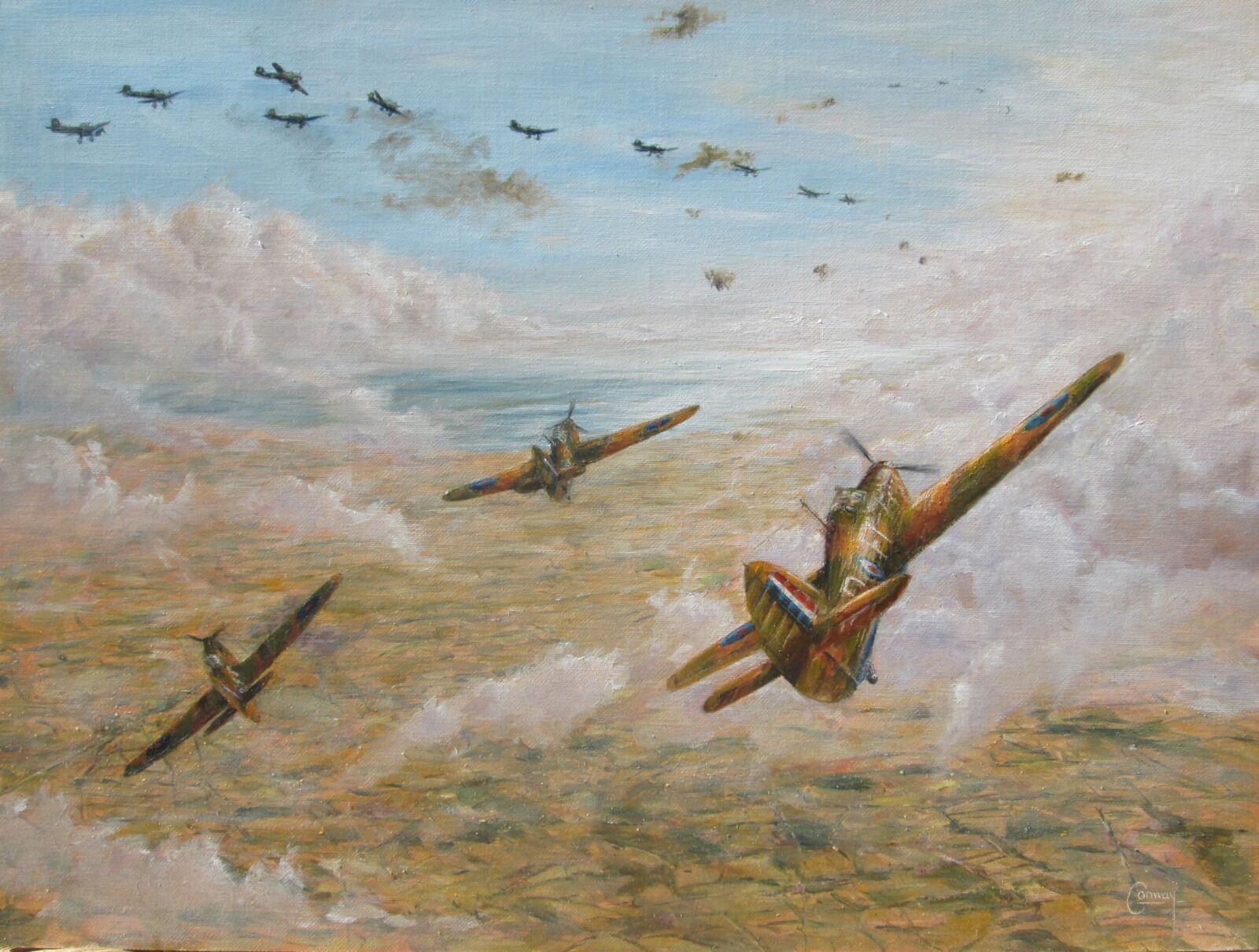 Hurricanes from Croydon retaliate against the daring, low flying raiders of neighbouring Kenley, shattering the peace of North Downs. 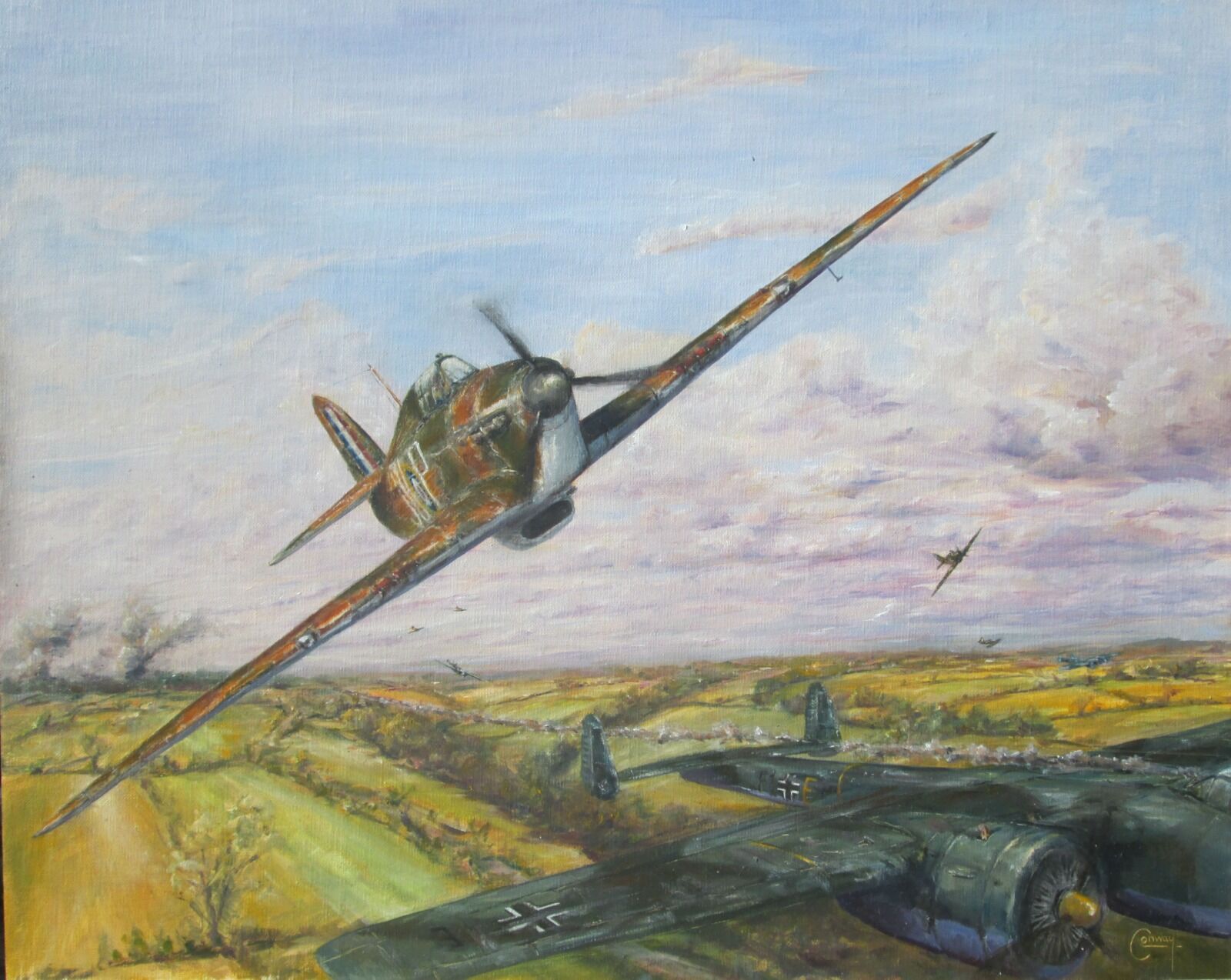 A deathly duel at tree top level the whole way across the (almost jarringly pastoral) countryside of Kent... 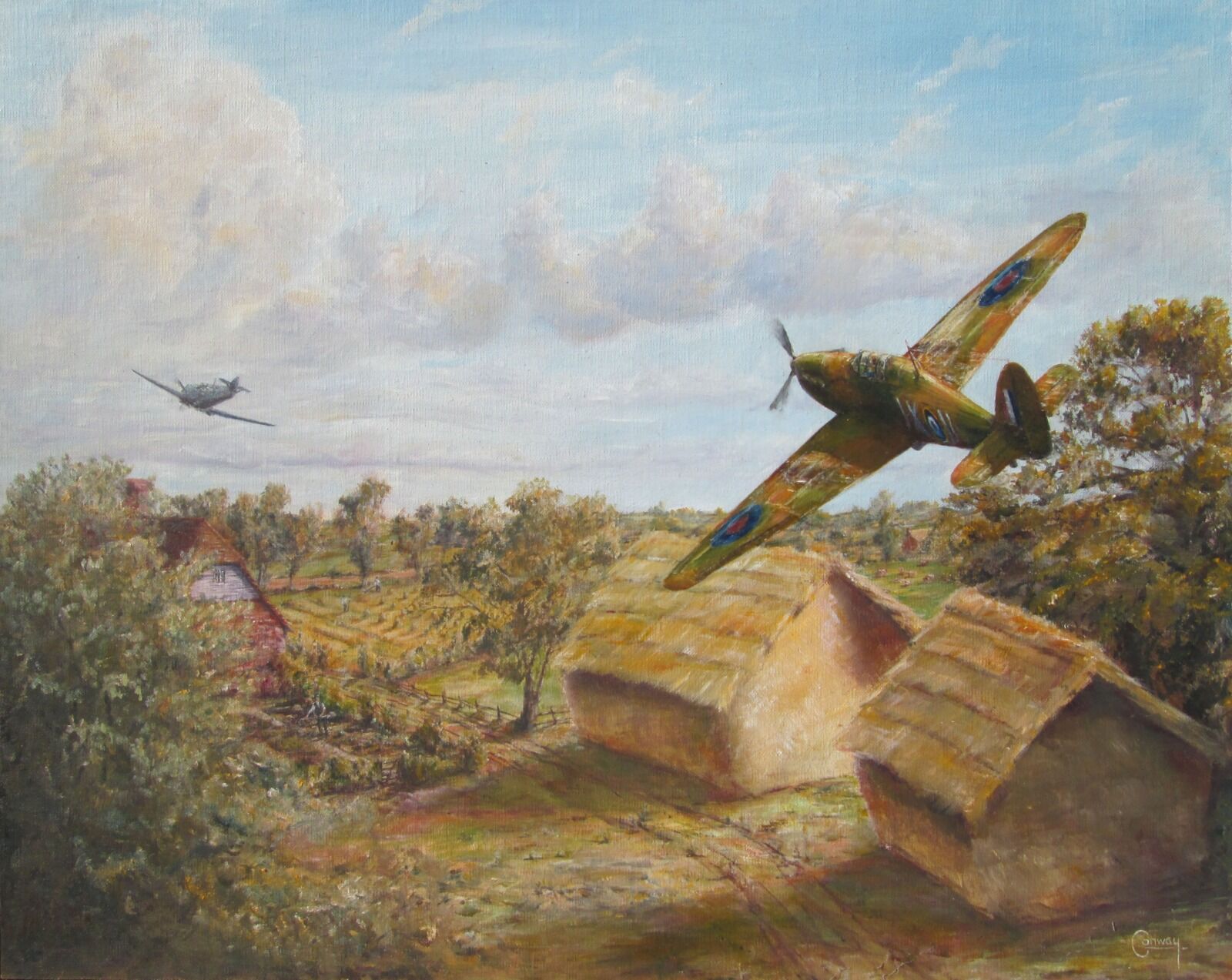 ... or moments to escape from the risk of a burning cockpit after nursing a damaged Hurricane back to Tangmere, only for the undercarriage to shear off on landing. 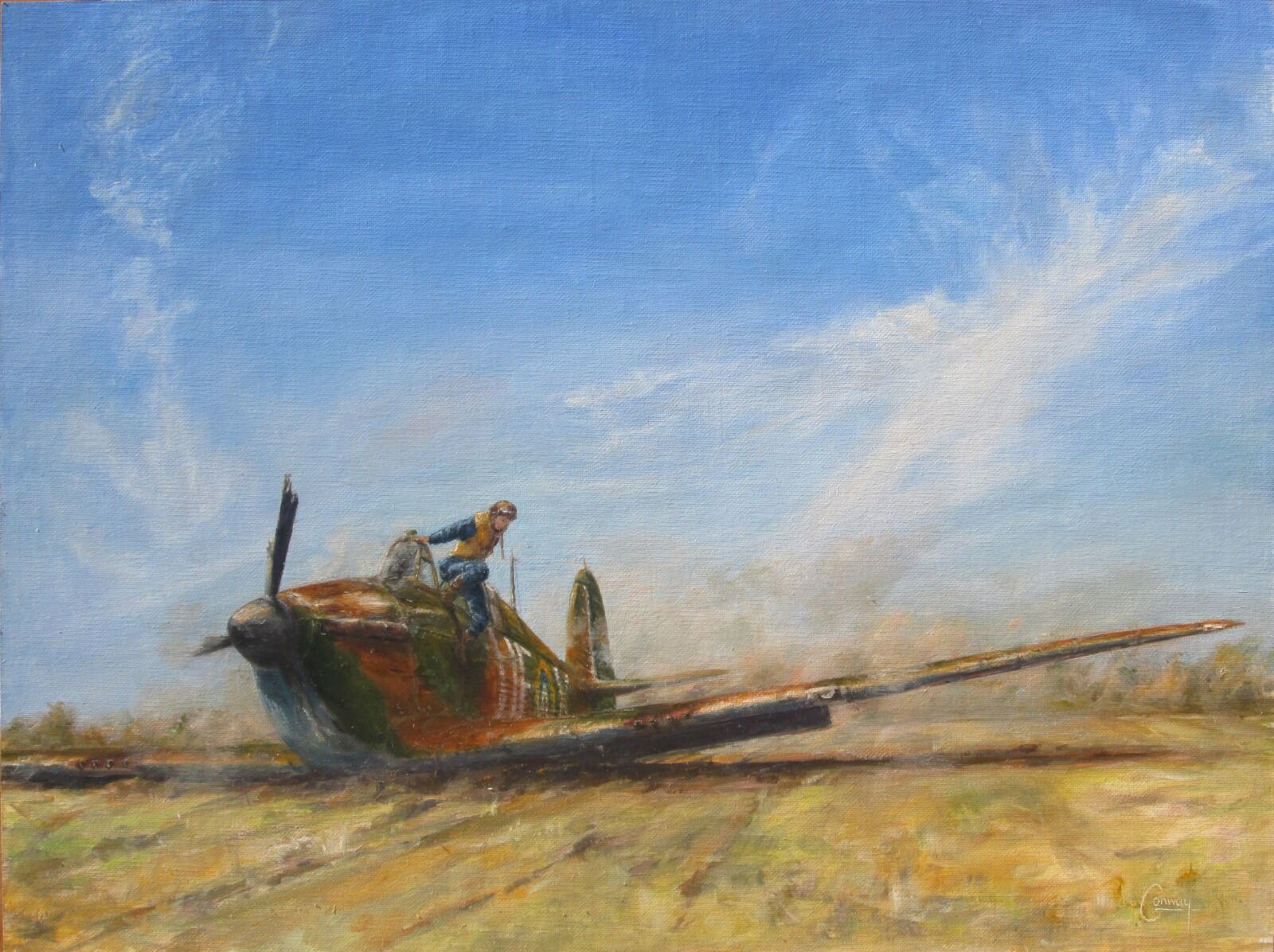 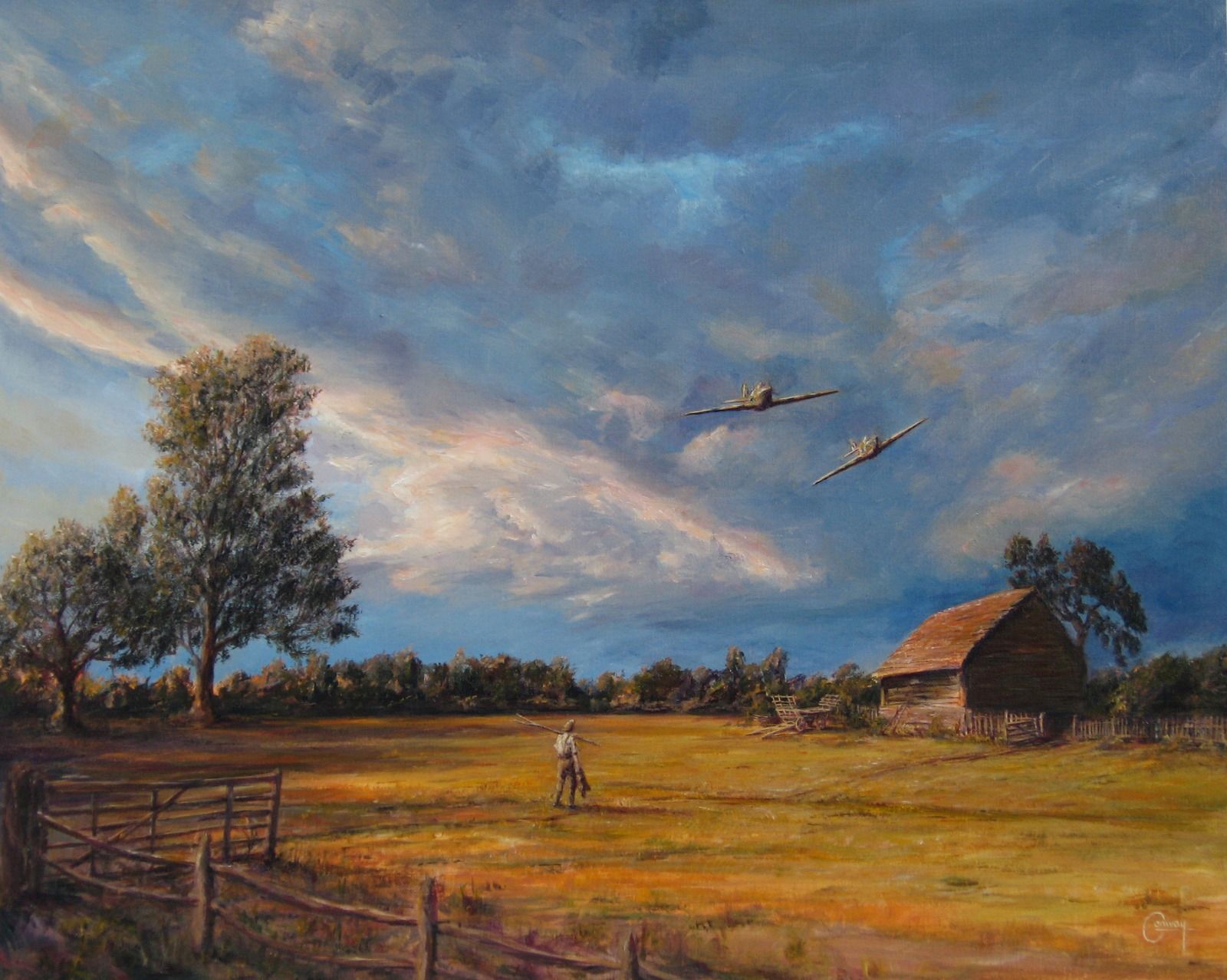 ... whilst another aircraft, damaged, full of holes, finally taxis to a halt at North Weald, only to deliver another night’s work to the ever patient, equally determined, ground crews. 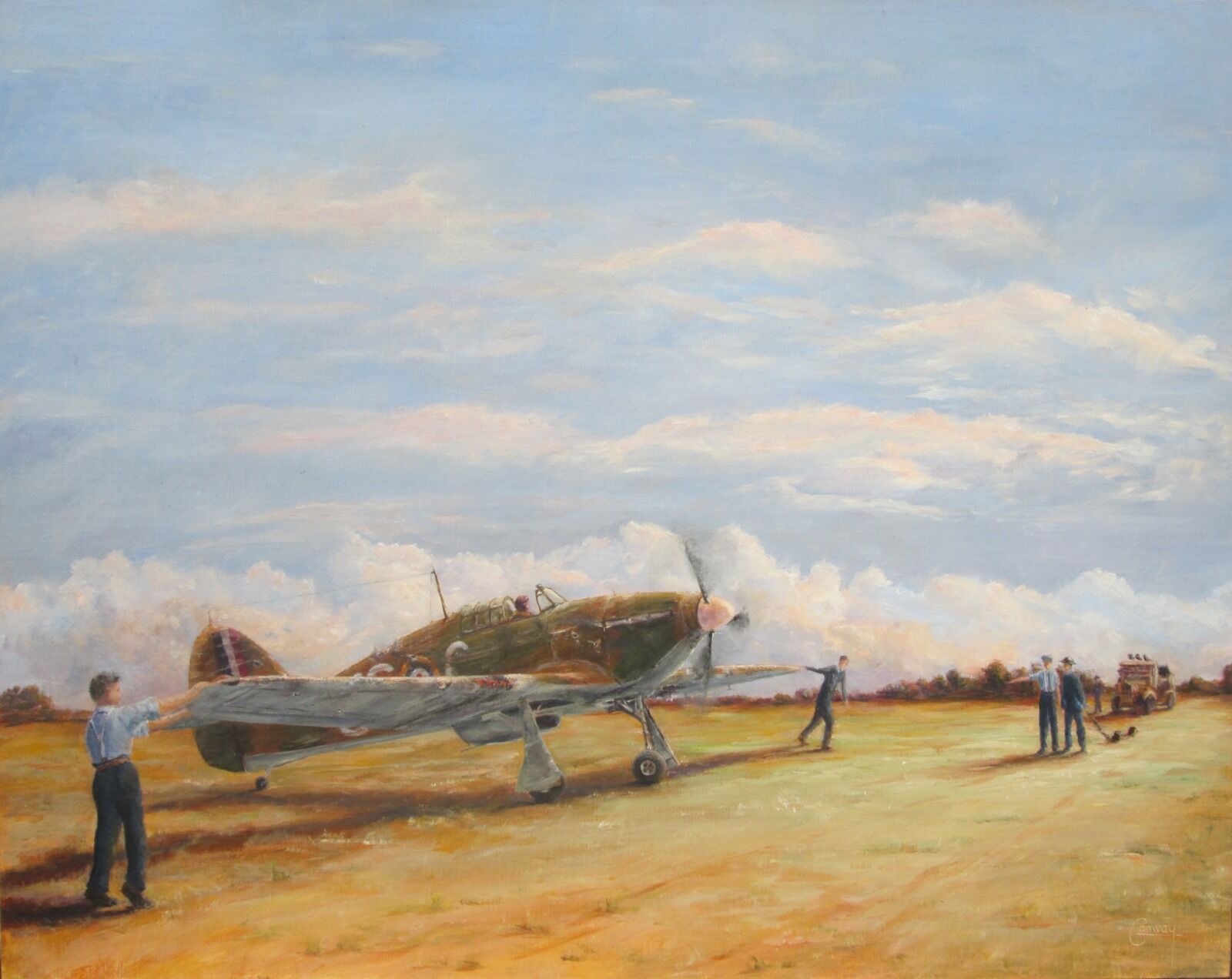 It could have been any day really. Only the long view of history has come to define this as one of the most notable days in the Battle. For those involved, it was just another of the many days of unceasing effort to defend their homeland from the seemingly unstoppable tide of advance of an oppressive foe.

My aim with these paintings was always to create something more than some good paintings of WWII fighter aircraft with some vaguely appropriate backdrops. I try to be as true to my subjects as far as is possible. It is after all a real story that I am telling. Often this involves a mass of research, studying combat reports, histories, old maps and memoirs. This helps me get as near as I can to understanding and visualising the real moment as closely as possible and indeed often determines the artistic direction the finished painting takes. I also feel that it gives a verisimilitude to most of the paintings that would not be otherwise possible.

And whilst accurate depictions of the aircraft and other elements in my paintings are important, what is most important for me is to try to evoke the atmosphere, spirit and sense of the moment. Even if those moments are sometimes split seconds in time, they are the sort of split seconds that are worthy of paying attention to. They play an incredibly significant part in our nation’s history and represent the extreme courage, stamina and self sacrifice displayed by ‘The Few’, who secured victory in the skies over Britain, by the narrowest of margins, in that arduous summer of 1940.
You can view all of these paintings in closer detail and find out more about the individual paintings, prices and availability.

I am currently working on a further set of 'Hardest Day' paintings. This time they depict Spitfires in action on the 18th August 1940 and other parts of this dramatic day's combat. For a taste of the type of work that is to come and more about the process of creating a Battle of Britain painting visit my page:
Painting the Spitfire
Next
Previous