How a place name comes about in the first place and what it might tell us about those who first used the name. 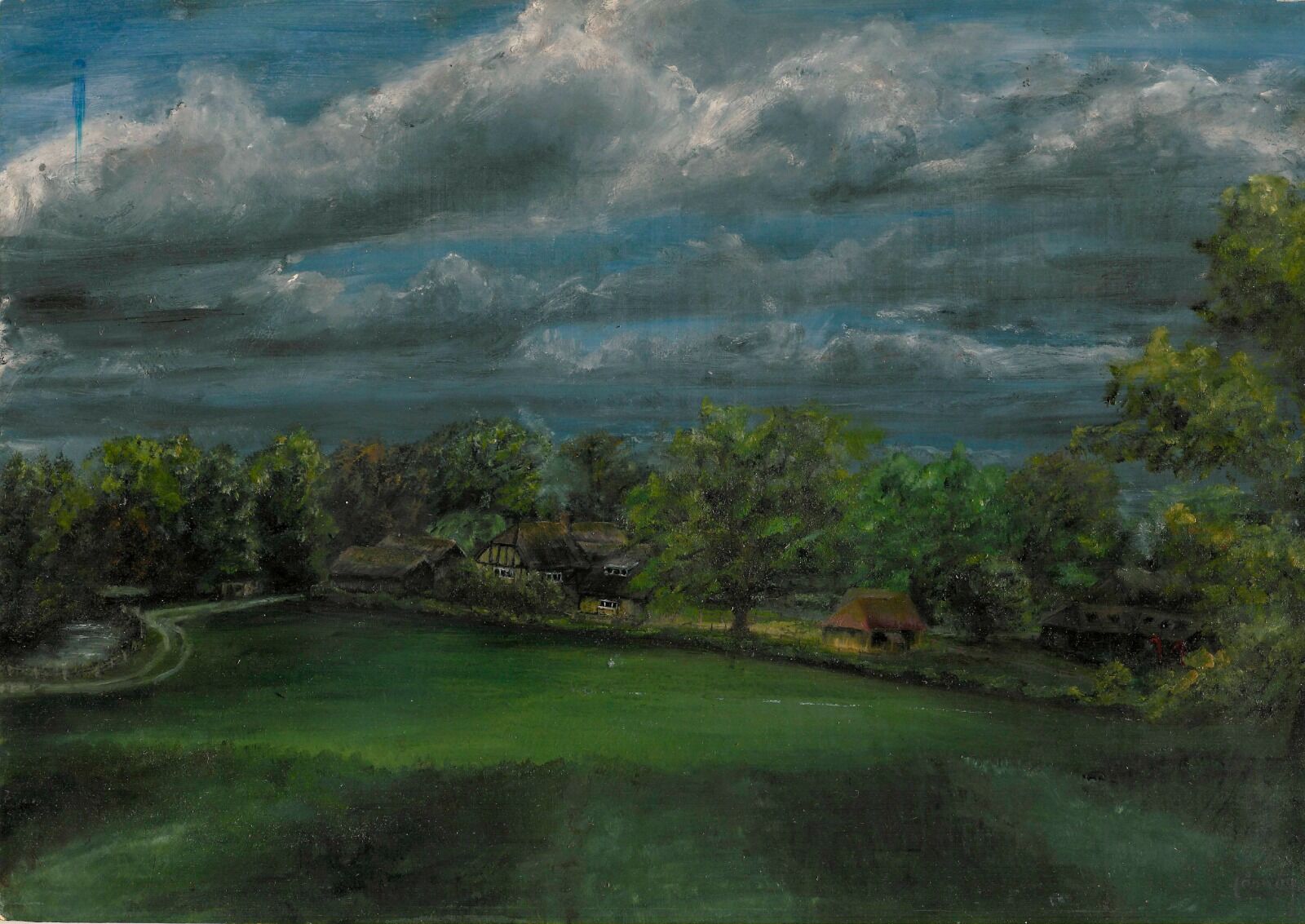 The view from the 'Windmill Field' described in the article. I painted this in the nineties when I worked on the farm. I used a sketch I made whilst sitting by the tractor at lunch break. (I had been 'mole-ploughing' the field and the ridged 'heave' of the ground from this task is visible in the foreground!)
On the first farm that I worked on, in Sussex, there was a field which was called ‘Windmill’. There was no sign of anything that could have once represented a windmill there on the ground and nothing on my 25 thou. map. The site did seem a plausible spot for one though, and a footpath running to the hill top seemed to reinforce the suggestion of an old need for access to the hill top, consistent with a typical windmill site.

I asked my boss if the field used to have a windmill in it. He thought there must have been, but had no recollection of one: the field name had just been passed on to him when he first took on the farm. In those (pre-internet) days, trying to find out more would have required a fair bit of legwork, so I left it at that at the time.

More recently, thanks to the internet, I have been able to find out a little (but not much) more. The first edition OS map in 1888 shows a site for a windmill (ruins) just over the hedge, on our neighbour’s land, but I certainly can’t remember having noted anything significant in the spot it is shown when I worked there.

Our ‘Windmill Field’ name was not recorded anywhere, it was simply passed down orally as a useful ‘tag’ for a field, a tag that it had probably held for a couple of hundred years. The windmill was in ruins over a hundred years before our usage of the name, and even an awareness of any tangible evidence of its existence was lost by then too. Yet we still used the name, showing with what remarkable tenacity a name can cling on and preserve the viewpoint of generations past.

A windmill is a very obvious feature and easily used (and apparently not easily forgotten). Loads of the names we use though seem to come from far less tangible features. I have often thought in the past about how a place name comes about.

I have seen the process in action, in a small way, whilst working on farms. Typically, it might occur when discussing some detail or other of field work, where to leave a stack of hay bales, or where a weak spot in a hedge is. Even though a field might already have a name, such a specific position wouldn’t have a name. Thus a visitation is required, on a minute scale, to the same ancient processes by which I can only suppose that the names that are now fixed on the map came about.

Trying to pinpoint such a spot in a field requires focusing on one’s topographical and historical knowledge of the place, to a fine degree. I have witnessed my colleagues cast around in their mind for the salient features of a place. An example might go something like this, perhaps it could be my boss explaining where a hole in the hedge that needed fixing was:

“Go into Windmill through the boggy gate, - you know the one where the spinner tractor got stuck last year. Follow along the edge with the rew ...”.
(‘Rew’ being a vernacular Sussex dialect term for a belt of trees creeping in from the edge of a field.)
“... Just after that the ground rises very slightly - you know, you have to drop a half gear when working the forager harvester up it. Well, near the top of that slight rise, there’s a little dip a yard or two in from the field edge (it’s where we had to pull the stump of an old fallen elm out years ago).... if you go about ten yards past that, you’ll see the a little gap in the hedge bottom, that’s where the sheep have been getting through.”

So you recognise some of these features in your own mind, maybe you hadn’t noticed the hollow from the old tree stump, but when you follow the instructions, sure enough there it is. Now all these things become part of a common geography, more easily referred to. Next time, a similar conversation will probably just refer to the ‘boggy gate’, ‘rew edge’, ‘half gear hill’ and the ‘elm hollow’.

Used enough, the names stick, pinning down topographical features, but only those that can be commonly recognised. Sometimes the names preserve the history too; it would be easy to imagine how all the names in this example could stick around. The same route might still be described thus, as long as the route, or the need for the descriptions, remains in continuous use.

So that even once the drainage around the gate was sorted, the rew cleared, the forager harvesters (having continuously variable transmission now) no longer need to drop half a gear and no-one who can remember the elm being there is still alive, and yet the names ‘boggy gate’, ‘rew edge’, ‘half gear hill’ and ‘elm hollow’ would live on.

A few things strike me about this process. Most obviously is the detailed topographical knowledge that we clearly store up carefully and almost effortlessly in our minds. When I looked up the details on the windmill, I can still picture the view across the spot over the neighbour’s hedge. (I last saw it around twenty five years ago.) How staggeringly complex is all this detail, yet usually we have just taken it all in, in passing, through our skin as it were.

What really intrigues me though is the way in which that topographical knowledge is bound up in an intricate web of implied purpose and a sort of mental historical documentation. The rise in the hill is remembered as a need to change gear in a tractor, the boggy gateway as a cautionary tale. The elm hollow is a record of an historical event, witnessed by a previous generation and the rew edge serves as a reminder of the cycle of nature competing with agricultural intent, pushing back tree cover into what might be regarded as the unnatural ‘vacuum’ of a farmed field.

All these features have been chosen deliberately by the protagonists, they are part of a common vocabulary, in this case relating to farming activities. I doubt a naturalist or picnicker would have used the same terms. (In fairness, they wouldn’t be likely to have had much interest in the destination either, as the point of the directions was to locate a hole in a hedge which stock had escaped through!)

A name not only tells us something of topography and use of language, but most fascinatingly something of the thoughts of those who used it. To have a complex vocabulary relating to different shapes of hills (see the previous article), like the Anglo Saxons appeared to have, points to an importance of this in their society. I doubt their reason was simple artistic appreciation. The exact shape of a hill must have been something that lots of people noticed at the time, or it would make for a poor basis for nomenclature. Perhaps hill shapes, types and locations had significant impact on the quality of a site to farm, settle or defend, in different times to ours? Maybe that’s why we don’t pay quite so much attention to it instinctively now?

To return to the example relating to the hole in the hedge: It is interesting to contemplate what would happen over time if these names were to stick, over a long time, maybe eventually be recorded on a map by a local historian or cartographer. What would people understand from them in centuries to come? Would they have been corrupted into indecipherable forms?

Assuming the language in use hadn’t changed, I think ‘boggy gate’ would still seem pretty transparent in meaning, even if it were now well drained. I think people would be able to infer the presence of an elm tree in some way from ‘elm hollow’, but that the detailed remembrance of the event it records and the small dip in the ground would both be long lost.

‘Rew edge’ would cause a confusion, perhaps easily corrupted to ‘rue hedge’; after all the Sussex dialectical word ‘rew’ is already nearly lost (it’s not in my dictionary), and ‘rue’ is at least a recorded word for a known wild plant. Hedge would seem to fit the topography better than edge too, as with the belt of trees which formed the rew gone, there is no longer anything for there to be an edge to. So maybe the now misunderstood and misspelt ‘rue hedge’ is speculated by countryside historians as having meant ‘the hedge in which rue grows’.

As to ‘half gear hill’ – well, it only briefly meant anything to anyone who drove a certain generation of tractors, which had the facility to drop a ‘half gear’; the hill would be barely noticeable, but for that need for a little more torque when working the tractor hard going up it. My guess is that almost no amount of historical detective work would get back to the true origin of this name in say, 200 years time, (unlike ‘Windmill Field’), but if it were still around as a name and were deciphered, it would serve to record something of a farming past.

What do we learn from all this speculation?

When we think of the significance of a place name, I think we register that they record fascinating, if sometimes rather mysterious, detail of the topography and historical events. Perhaps, what is not so obvious, but equally intriguing, is that they often also record the purposeful intent and preoccupations of the people who used them, just recently, or a long time ago.
Next
Previous