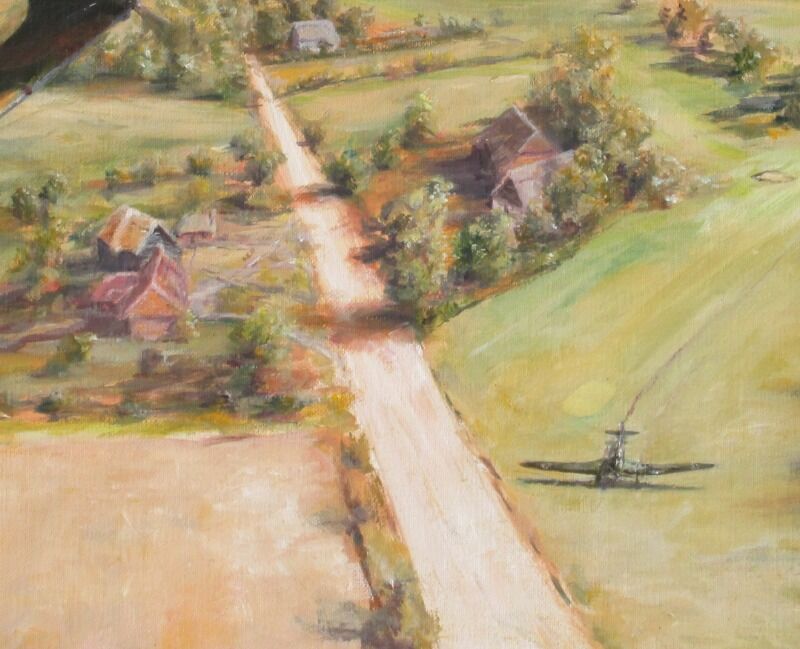 The Stuka near the Sussex farm buildings

10. Portraying a Landed Stuka in the 1940 Sussex Countryside

In which I move a Stuka slightly and bring life to the backdrop of Sussex landscape in 1940.
(Part 10 of a series on creating an original Battle of Britain oil painting)
Having got the sky and the Spitfire largely to my satisfaction, with the landscape drafted in loosely, I now had to bring the features on the ground up to the same level of finish. I knew I wasn’t that happy with the position of the Stuka, so I had another go at it, bringing it slightly forward in the composition.

I seemed to get lucky on this. My first go at changing it resulted in something I was much happier with, emphasising it just enough to draw attention in the composition. Additionally, this retained the right sense of scale to keep the Stuka in proportion to its surroundings and give the right feeling of height to Whall’s aircraft. I had to tweak the wing shape again as I painted it up; it was difficult to play down the distinctive crooked wing shapes which would be less noticeable from this angle. 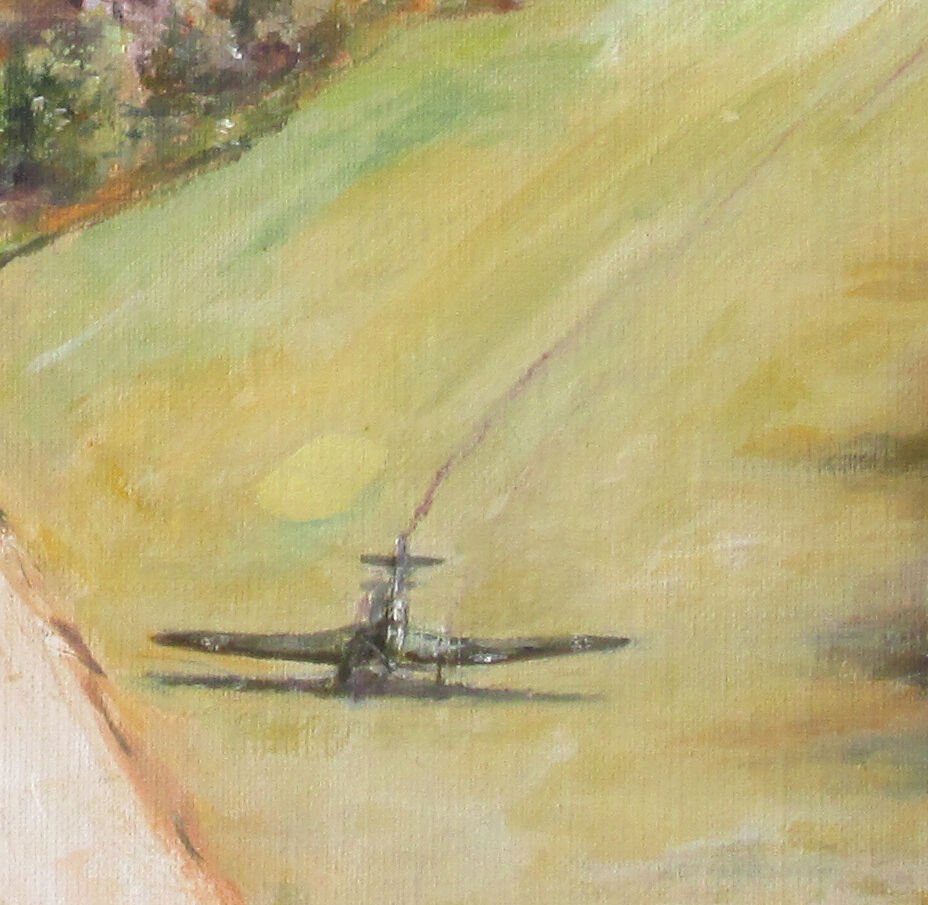 The Stuka on the ground; the tee for the 16th fairway is visible next to it.
Now I was on to the landscape, which rather like the sky, is a really significant part of the painting. As someone who loves painting landscapes in their own right, however, I have to take great care in an aviation painting such as this not to let them overwhelm the main subject of the aircraft. I had determined early on that part of the success of the painting depended on keeping the foreground relatively free of detail and quite ‘loose’ in style. This would help keep the emphasis on the planes and create the feeling of movement needed to bring the art to life. Against this though, I knew there had to be enough ‘sense’ of detail to communicate the reality of place that helped make the subject so interesting.

Another key point in my mind was to keep the ‘values’ of the ground, especially the foreground, quite light, otherwise there was a very real risk that the camouflaged aircraft would not stand out enough in the painting.

It will probably be obvious to anyone who cares to study the landscape detail in this painting how much I have enjoyed depicting it: The suggestion of the little Sussex farms tucked around against the hedges and nearly ripe corn of this fertile landscape fading in to the distant bluing hills of the downs. The row of glasshouses, recreated to fit their locations on the old maps from my memories of similar ones in the alike market gardening landscape of Milford, Surrey.

The rows of glasshouses and the suggestions of little Sussex farms in the background.
Trees viewed nearby from an oblique aerial angle proved a little bit of a challenge, but I was helped with getting the feel of them right by studying an aerial photograph of our own house which had been left hanging on the wall here when we bought it. The golf course had its own distinctive features, but the sweeping fairways with their slight suggestions of mown stripes gave plenty of opportunity to help move the eye around the painting. 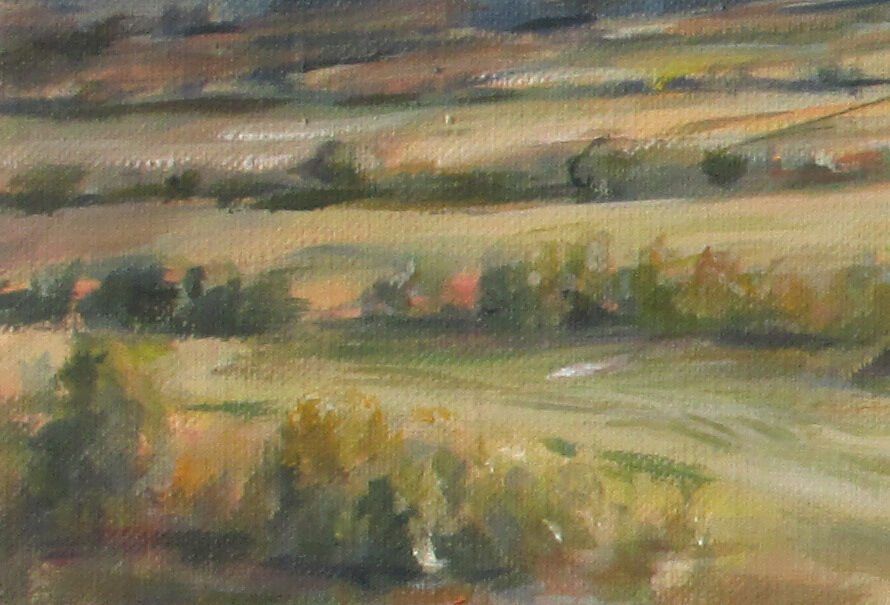 Some of the mown stripes and the visible ochre ground underlayer in the finished painting..
The two rural dwellings with their outbuildings in the centre of the painting gave me a chance to include a little strike of some reddish tones on the canvas. This really helped as a counterpoint to the sea of greens around them. Again, I had to work with substantial care here to get enough detail in to them without them taking over as the focal point of the art. If you look around the landscape of the painting, there is plenty of evidence of the original ‘ground’ layer of paint showing though, with its distinctive orangey brown hues. These I think provide warmth and a unifying element to the whole, which work well. Perhaps a few words on my use of paint next may be illuminating on understanding how the painting ‘happens’ in a practical sense...

The farm buildings in the centre of the painting, detail which had to be painted carefully to avoid it taking over the artwork. (The ochre ground is much in evidence here too.)
Next
Previous