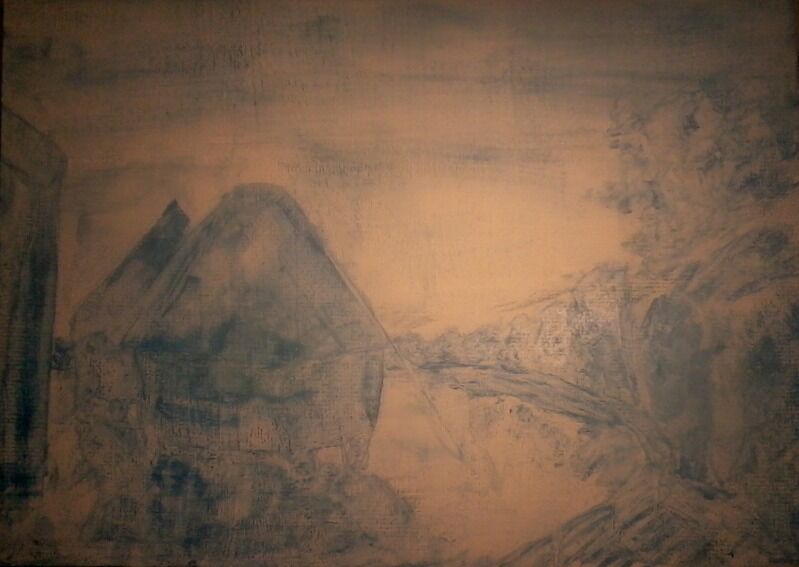 The start of the painting 'Rick Thatching at Dusk'. (The finished painting is in the 'Landscape and Farming' Gallery.)

The Start of a Thing

20/11/2020
It surprises me how much I like the results of the first few hours of painting...
... I mean, perhaps there’s a certain amount of laziness in it, after all the first bit is the most enjoyable and if you can sort of see something of the sense of the finished work in it, why shouldn’t I stop there?

I often take a photo of a painting at this point. In my mind I do this because I think it is a good reference point, it means that if I lose my way in the subsequent working up, I still have this reference point to go back to and check that I haven’t lost something of the overall feel of it by getting absorbed in details.

I think I also photograph it at this point because I like it. It is a kind of impressionistic representation of the image in my mind. Its lack of clarity is part of its charm. A hay rick which, as the painting develops becomes clearly bathed in evening light could also be the same hay rick encountered in the light of the moon. A shadow in the corner could be a tree, or a cluster of buildings, even a rogue old fence post is sometimes suggestive of the figure of a person in the landscape.

This layering of different ideas and memories into the image is exciting. It represents different possibilities. Sometimes it suggests different ways to my original conception in which I could develop the painting. Sometimes I go with these and change the painting, other times they are kept stored up as promising juxtapositions which inspire later paintings. Sometimes they just come and go, like the fleeting glimpses of possibilities unexplored, or the unexpected interruptions of past memories in the constantly active present.

I feel that these possibilities and memories become incorporated in some way in the finished painting; the presence of them as ideas at the early stage of the art’s development must surely influence its outcome.

What is the most important stage in the delivery of an artistic idea? Is it the moment that the artist conceives the idea of the painting, or the moment where the artwork narrows down and follows one clear line of development (a hay rick at dusk)? Perhaps it is the moment when the viewer first looks at the work and overlays his or her own ideas onto the artist’s?

You could even wonder if it traces back earlier, before the artist even conceived of it as a work. Is the most important phase of the work the accumulation of the artist’s experiences; filtering, merging tumbling together, overlaying linked and apparently unrelated memories until they become laden with meaning and significance?

Perhaps every start of a thing, artistic or otherwise, carries this unique mix of ambiguity of potential and promise, slightly released, but not disconnected, from what came before.

And if a painting at or near its start carries all this excitement, it’s no surprise that I am tempted to stop there. It’s rather like knocking off early after a first day at an exhausting new job. The real success of the endeavour is in finding the stamina to carry on and execute the original idea, layered with, but not subsumed by, the strain of new concepts, learning and memories that it conceives.
Next
Previous