Battle of Britain pilot Richard Hillary's book "The Last Enemy" provides me with much needed insight and inspiration, at a moment where the world once again faces the the crisis of war. 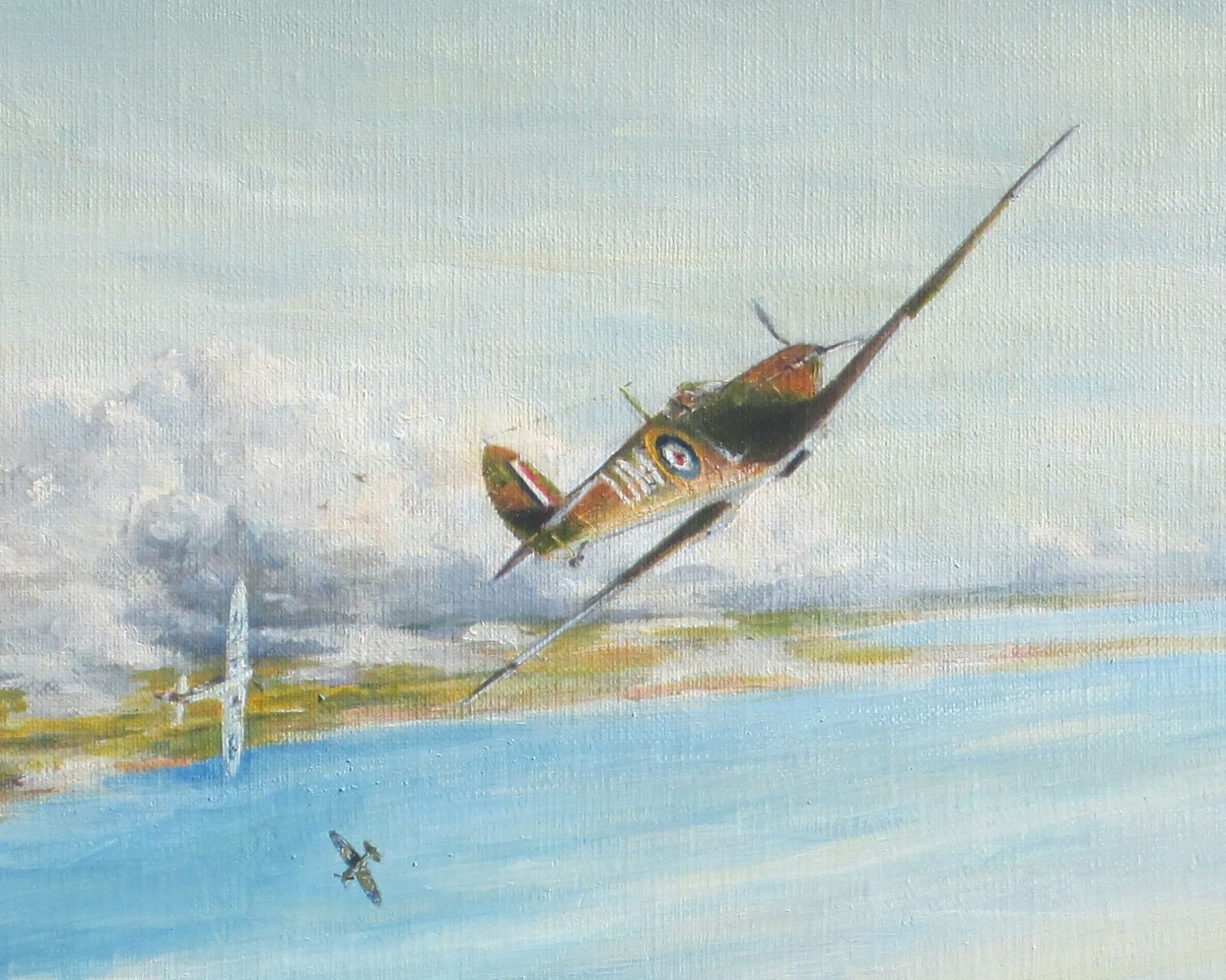 It is hard to know what to write at the moment...

The strange duality of ordinary, everyday life continuing much the same, set against a crisis which has already displaced well over a million people from their country, families, lives and homes, makes it hard to find any words or art sufficient to rise to the situation.

I think others probably feel the same way.

I am faced with the daily fact of my everyday problems, issues and needs, which press themselves upon me with an immediacy that requires spending my energy dealing with them. Yet, at the same time, I feel constantly conscious of the plight of those caught up in a war, facing problems whose scale and nature makes me feel as if I am worrying about a stain on the carpet whilst the other end of the house is falling down.

My rational mind cannot really resolve this contradiction, and probably correctly, the two things are utterly irreconcilable. Perhaps my intuition is ahead of me, it seems to know that my rational self cannot resolve this and (as it always probably does) continues to pilot the ship.

All this leaves me floundering though when it comes to any rational expression of myself.

Perhaps it is not surprising that in trying to face the immense sense of internal disharmony that these feelings create, I should seek for any understanding that could be gained from the experiences of individuals at the outset of WW2. The eerie parallels have been far too obvious to ignore.

It has prompted me to return to ‘The Last Enemy’, the autobiography of Battle of Britain pilot Richard Hillary. Hillary’s book was written in 1941 whilst he recovered from the horrific burns he suffered during the Battle of Britain, before he managed, so bravely, to return to flying duties, in which he was tragically killed, in 1943.

Unlike most accounts of the war I have read, this then was not written with the long view of history behind it, but was an authentic voice from the midst of a conflict whose outcome was far from clear at the time it was expressed.*

The book tells of Hillary’s road from University to the RAF, his pilot training, and combat experience in the Battle of Britain. He describes his experience of suffering terrible burns whilst escaping his burning Spitfire and then a subsequent three hours floating in the English Channel in this state, convinced of the certainty of imminent death. The book continues with an account of the first part of his long road to recovery from this, in South East England, during the Blitz.

Remarkably, what really stands out of the book, which is full of incredible first hand testimony, is actually a thread of narrative in which Hillary is essentially trying to come to terms with his experiences, and his place and part in what must have felt like a world gone mad around him.

In particular, he reflects at length on his conversations with fellow 603 Squadron pilot, Peter Pease, who was killed in combat two weeks after Hillary suffered his escapade in a burning Spitfire.

Their conversations seem to revolve around dialogues in which Hillary expresses, with rational justification, a view that each individual’s actions are centred on the self and argues his reasons for fighting the war to be based upon the freedom to live for “the realization of one’s self”
.
Pease expresses a deep conviction in a contrary view, arising, for him, from his Christian beliefs: that his reasons derive from the need for “ ...freedom, man’s humanity to man.”.

The recalled conversations in the book are long, complex and involved. Perhaps Hillary presents them as close to verbatim as he can remember because he never expresses finding a rational reconciliation between these world views. What is clear, though, is that he struggles to persist with his entirely rational interpretation throughout.

Some kind of revelation clearly occurs for him though, after the experience of helping to pull a dying mother and her dead child out of a collapsed building in London during the Blitz:

“ Then she started to weep...the tears were running down her cheeks when she lifted her eyes to mine. ‘Thank you sir...I see they got you too.’... ...All humanity had been in those few words...”

Even then, he can still proffer no resolution in words to the internal divide between “The feeling that I was everything and the evidence that I was nothing”.

I have reread and scoured the book over the last week searching to understand Hillary’s epiphany. The only clue might be where he quotes the words of the fiancé of his deceased friend, Peter Pease, telling him that “By feeling the deaths of others you are conferring value on life”.

Hillary clearly struggles with this. He tells of his sense of guilt at having lived where others had died, his sense of impotency at being able to change anything. Some kind of resolution comes for him, in the form of writing the book itself:

“If I could...tell a little of the lives of these men, I would have justified, at least in some measure, my right to fellowship with my dead, and to the friendship of those with courage and steadfastness who were still living and would go on fighting until the ideals for which their comrades had died were stamped forever on the future of civilisation”

The book ends here, but Hillary, despite having suffered so much already, subsequently pushed himself to try and return to the fight and paid the ultimate price in doing so, killed whilst retraining for nightfighter flying duties in 1943.
If Hillary felt he had not, and could never do enough, despite everything he did, it seems little wonder that I would feel the way I do.

Life will continue tomorrow for me much as normal and the news will be just as bad. It is a dilemma I must live with. I will keep looking to find further ways I can help, do more, but I will have to accept the feeling of always falling short.

I think Hillary might well have been saddened to know how relevant his writing seems to be eighty years on. He was writing to give voice to those who were fighting and suffering so bravely in the dreadful war that raged around him. I’m sure that he was all too conscious in his task of a point that Pease made to him:

“...wasn’t it your friend Goethe who said that while an artist never writes with a moral end in view, the effect of a work of art is always moral?”

Perhaps I should end then with the effect of his work of art on me. It is to take notice of the words of Pease, which I think ultimately Hillary concurred with, and thus represents to my mind something of the expression of the wishes of two young men as they stood firm and gave their lives defending their country and its freedom against an oppressive invasion of their country:

“I believe that we should all make our contribution, even though it’s a mere drop in the ocean, to the betterment of humanity”

In them, I find both inspiration to keep trying and some slight balm to my sense of inadequacy.

*There are genuine reasons to believe that the book was actually ghost written, but to my mind this does not undermine the authenticity of expression in it. Chronologically, the book still arises from the same point in the war, whoever actually ‘wrote’ it, and there can be little doubt that such a personal account must have had a significant input of Hillary’s own thoughts, opinions and experience behind it.
Next
Previous