Approaching the anniversary of one of the most important train stops in English Literature, at Adlestrop in Gloucestershire, I take a mental walk around the history of streets of my local town, Llandeilo, and wonder whether it might be time to think a little more carefully about our experiences of moving around. 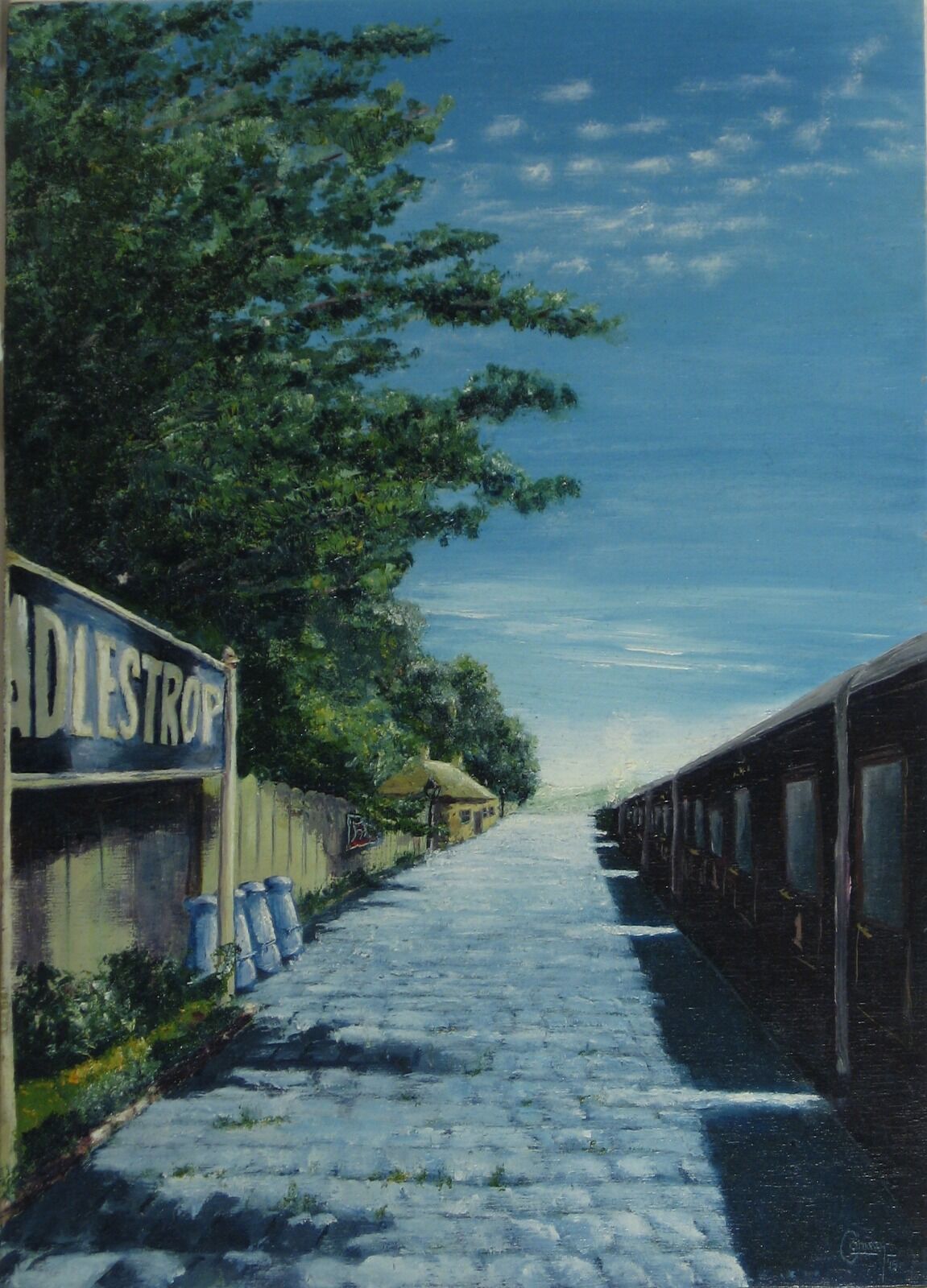 My painting of 'Adlestrop'

A little over a hundred years ago at around this point in the year, a train ‘drew up ... unwontedly’ in a little country station on the edge of the Cotswolds and, in doing so, sparked what is undoubtedly one of the finest and most loved pieces of poetry in the English language: ‘Adlestrop’, by Edward Thomas.

Perhaps then it is an appropriate time of year to allow me to dwell a few moments longer on the thoughts arising from my imagined wait on another country railway platform, more local to me, that of the lost Llandeilo Bridge Station, re-imagined in my last blog.

It is a good place to start delving deeper into the history of people coming and going from the town. It seems too, as there is no station there any more, I’ll have more than enough time to wander a little up the road into the town to explore some more, without any fear of missing the next train.

Just a few hundred yards up the road, the stunning (1843-1848) Llandeilo bridge crosses the Towy, but pausing on the parapet to look more closely, one observes that the street running down to the bridge actually misses meeting it; the terraced houses run on past it by thirty yards until they are almost below it. Investigation reveals quite quickly that the site of the previous bridges across the river were actually just a little downstream of the present one. The remains of the abutment of the Roman Bridge across the river are actually visible more or less in line with the last stretch of this street.

Another hundred yards on, up the steep hill into the town, an indication of the river’s importance as transport infrastructure is visible in another quirky little road, dropping back towards the Towy, but apparently now leading nowhere, called ‘Heol Y Cei’ or ‘Quay Street’.

As one passes on, ones naturally follows the main road through the town, past the church of St. Teilo. There seem, bizarrely, to be two graveyards to the church, one next to it, the other across the road. They were actually once one and the same, but in what must be one of the earliest ‘bypasses’ to have been built, the current road was built through the churchyard in the 1700s, and then widened in the 1840s, presumably to alleviate what must have been the tremendous difficulty in negotiating the way up the perilously steep street to the left, which was actually the main route in.

Turning to contemplate the beautiful view from the top of the churchyard, anyone having walked this far into town will be in no doubt as to where the current route in is; the narrow streets of the town struggle to cope with the throughput of vehicles of all sizes negotiating their way along the main road between them.

Which brings one to mind of the latest chapter in the development of this town’s transport infrastructure: the (still yet to be built) proposed bypass. The first proposals for this were apparently made in 1938, eighty odd years on, it will be curious to see what develops!

Having taken this brief stroll to understand something of the town’s fascinating transport past, present and future, a tiny detour on the way back to the disappeared station could take you to an interesting point slightly southwest of the current Llandeilo Bridge.

Here, you would be on the intersection of the line of the Roman road with the line of the lost 1864 railway line. A hundred yards to the south is the line of the current main road, which follows the course of the late eighteenth century turnpike road. A few hundred yards to the north is the Towy, clearly one of the first important transport routes to the town, and a hundred yards or so to the east is the point where I think (but I struggle to keep up with the proposals!) the latest incarnation of the town’s bypass is proposed to set out from. A veritable spaghetti junction for the time travelling minded tourist!

One of the things that strikes me, contemplating all these overlapping and intersecting routes, is how each one must (or will) have formed such an intrusion into the landscape at the time it was (or will be) constructed. Whether it was the roads of the Romans, canals, turnpikes, railways, bypasses or motorways, each ‘system’ is built to prioritise the speed of movement of its users, with, one suspects, a rather cavalier disregard for the landscape and its inhabitants.

I remember vividly a cartoon I once saw, I forget where. It showed what was clearly a Roman official, knocking on the door of a native Briton’s hut, with an eviction order. In the background could be seen the approaching construction of the straight and unswerving line of a new Roman road, heading towards the hut in an otherwise completely open landscape: clearly not even the slightest detour from the ideal line was to be made.

Perhaps the Roman’s unswerving military roads were the apogee of this approach, designed, as they were, to facilitate rapid troop movements around a newly conquered province. To a greater or lesser extent, though, one can still see this mentality, of utter prioritisation of user movement speed in all of the types of transport routes mentioned. Each are, of course, subject to the engineering constraints of their times. The Victorian railway system, with its incredible feats of infrastructure, exemplifies this all too well. All those astonishing viaducts, numerous bridges, cuttings, embankments and tunnels, aimed to deliver the efficiency of travel on the railway, once built, as the top priority; tearing dramatically on their engineer-optimised way through town and country alike.

It is hard to envisage the scars in the landscape that these new railways, canals, turnpikes and even Roman roads must have seemed at the time. All of these things have through time, nature and familiarity fused so much into the countryside that they seem an intrinsic part of it. Many have completely disappeared, while others such as railway cuttings and the ribbon like ponds that make up disused canal routes, have become sanctuaries for rare wildlife in our countryside.

Yet scars they must have been. For those that remember the controversial destruction of Twyford Down for the creation of a vast cutting for the M3 extension, it will be easy to transfer this vision to the construction of the railways or the canals to make the point.

Given how intrusive and repetitive this process is, it intrigues me how after several thousand years of ‘network development’, we still seem to be in constant pressing need of developing new ones.

I was discussing with a friend from Buckinghamshire the construction of the HS2 line through the area, which I haven’t visited for a couple of years. She mentioned one lane which we both loved. It was one of those lanes which seem to meander almost pointlessly between through routes, one of those lanes which are so little used that you feel to be intruding on private property as you pass though a farm whose ancient buildings straddle both sides of the road. Even to say road is almost wrong in such a place, as the barely used surface is covered with mud and wildflowers down the middle, through so little use.

Turns out this lane is now the main access route to a key point on the HS2 build and has changed out of all recognition in character. It has traffic lights at its entrance and heavy construction traffic plodding up and down it.

This will be just one of many examples all along the route. I guess maybe in time, after construction is complete, this one might be lucky enough to return to a tranquil fragment of Home Counties countryside. If it does, there will be others which won’t be so lucky. I dare say that it is quite possible that in a couple of hundred years, the cycle of new transport ideas will have moved on again and we might have abandoned the HS2 route altogether, and nature will reclaim it. Perhaps some sections will become whatever the contemporary equivalent of cycle paths will be and the tunnels may become the best bat sanctuaries in the country.

I can’t help but feel, though, that underneath all this is a continuation of an enduring human folly: Our constant need to keep getting everywhere, ever faster.

I’m not against the development of transport infrastructure. I for one have made plenty of use of it over my lifetime, but I do wonder what it achieves for all of us. We improve the infrastructure so that we can get places quicker, but really, the general net effect is that we all find ourselves having to travel further to achieve the same things, and largely neutralise any benefit from the infrastructure improvement.

This is a complex discussion and maybe one that I am not really qualified to venture into. I suppose though, there is a small ha’penny worth of thought that I do want to chuck in to it. That is that maybe we should change the way we view the time that we have to spend journeying from place to place.

It seems that we just won’t accept the journey as a valid and useful part of the experience. So focused are we on reaching the journey’s end, that we fail to appreciate all that the process of travel itself has to offer us.

Perhaps instead of just looking at the time a journey takes as the principal success criteria, we should look at what the quality of the journey is like. I for one love to potter along a British country road on a bike or in a car, much more than I like hammering along a motorway; I get a sense of connection with the geography of where I am. Whenever I walk somewhere, there is so much that I take in from my surroundings, without even trying. It seems that the more laid back (and usually thus slower) the mode of travel is, the more it has to offer us.

I think we know this intuitively. People go out for a walk, cycle ride, or ride on a steam train for pleasure, ironically sometimes these are even our destinations, as we dash from one place to another utilising the constantly improving transport infrastructure to get there ever faster.

It is true that had it not been for the passionate zeal of the Victorians in developing their railway system, then a poet might never have stopped for a moment in a tiny village in Gloucestershire and English literature would be poorer for it. I think, though, that our need to get about ever faster has probably come far enough now.

Is it really such a leap of the imagination to think that we might learn, (or is it re-learn?) to take in the pleasures and frustrations of slower travel as just part of human existence and relish the moments of interaction with our surroundings, and the moments of reflection and perception that come with this?

After all, it seems hard to imagine that the exquisite moment of Edward Thomas’s ‘Adlestrop’ would have ever come about had he been travelling on HS2.
Next
Previous