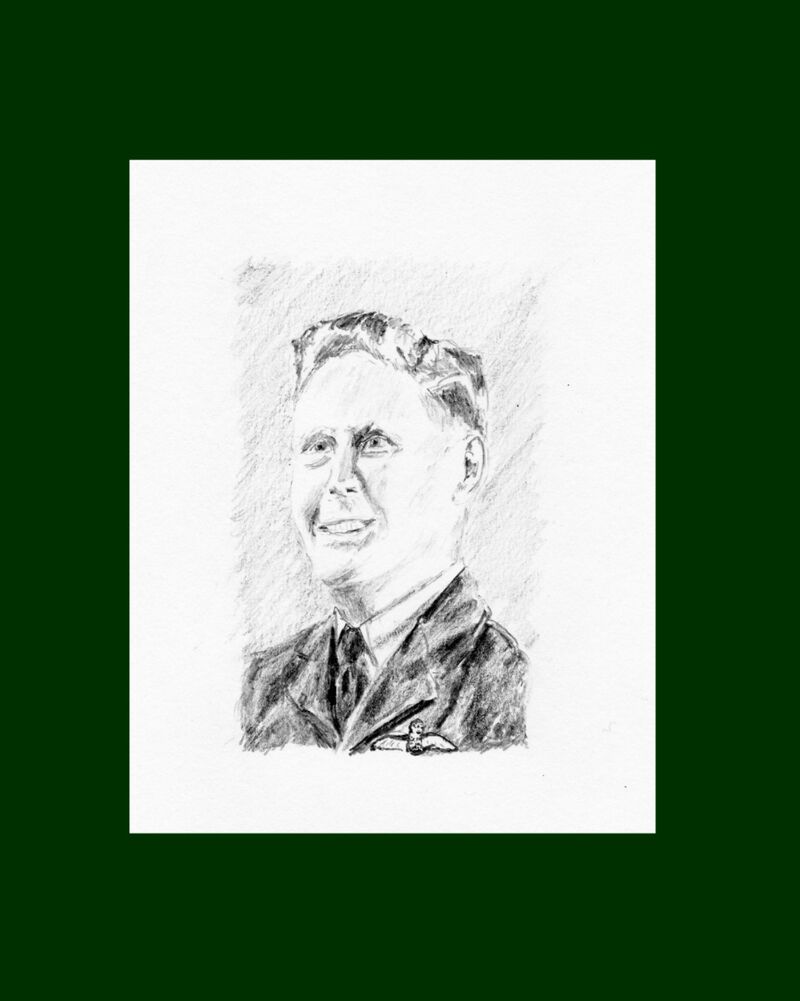 A Portrait of Sgt. Basil Whall

3. About the Pilot - Sgt. Basil Whall

29/12/2020
Where I find out more about the events surrounding a Stuka on an English golf course and understand a little more about 602 Squadron pilot, Sgt. Basil Whall
(Part 3 of a series on creating an original Battle of Britain oil painting)
After my Spitfire sketching endeavours, it was back to the painting in hand. My first action was to return to studying Alfred Price’s book “The Hardest Day” as the inspiration and first source for these paintings about one day in the summer of 1940. I had remembered the striking incident of the Stuka on the Golf Course and started to look into it a little more.

The first thing that struck me re-reading “The Hardest Day” and finding the combat report (many are available from the National Archives to view online) was what an intense period of less than 30 minutes it had been for the Pilot, Sgt. B. Whall. Not only had he forced this Stuka down, he had then further engaged and brought down another Stuka. Then, finding his aircraft damaged by return fire, he was forced to ditch his own aircraft on the edge of the sea. I find it hard to imagine how these guys coped with this relentless pace of high adrenalin activity, although it is quite characteristic of engagements of the Battle of Britain. 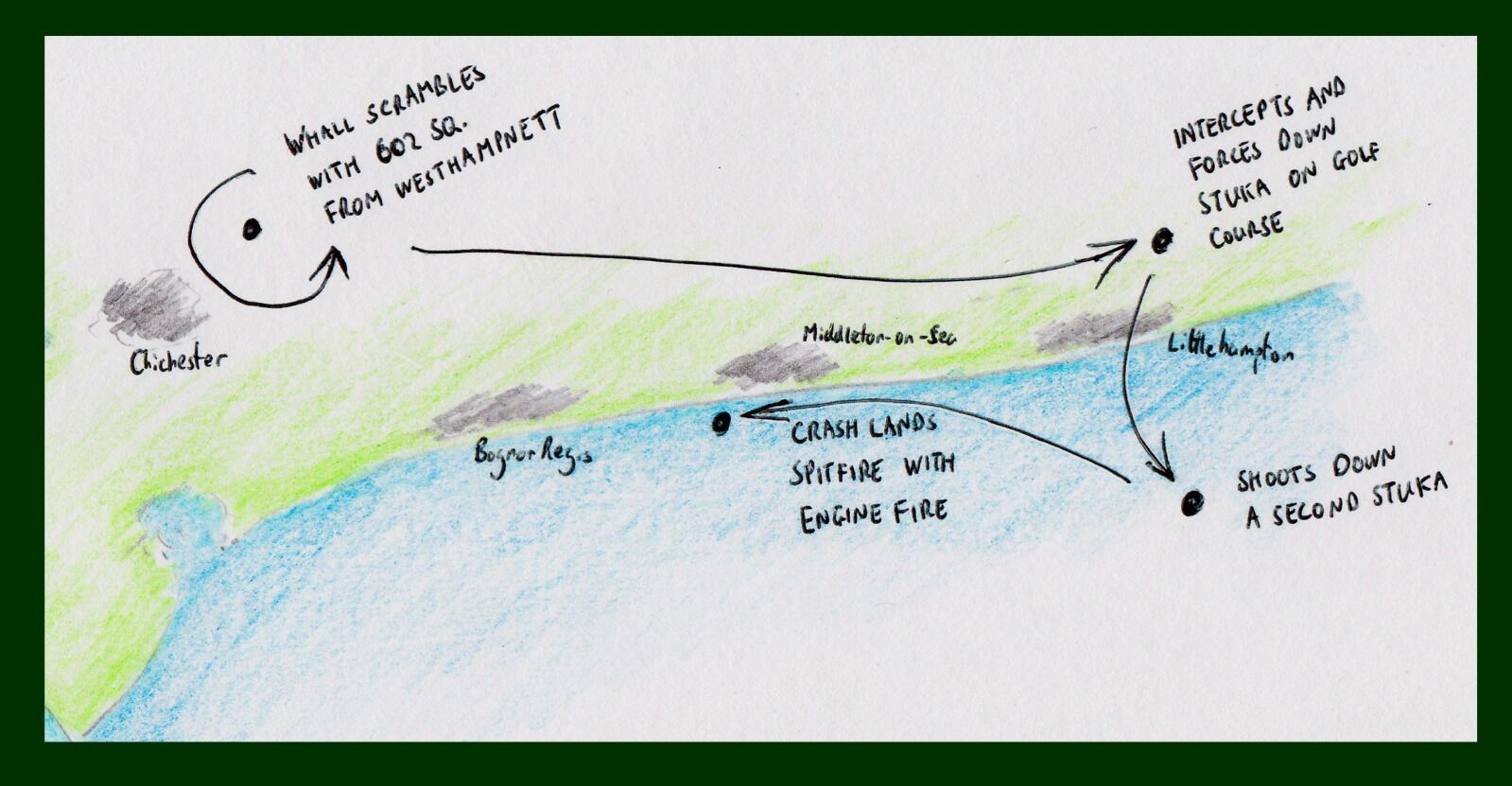 Sketch map showing Whall's flight
My research tends to branch out quite widely at this phase of things. Partly because I find the subject matter quite fascinating in its entirety, but also I find it important to try and understand the most rounded view of the events and the people involved as possible. I feel there is a debt of responsibility in doing this, as these events carved and shaped peoples’ lives and deaths, which I think prompts a certain kind of sensibility and respect. So many years after the time and in the knowledge of their eventual outcomes, it would be easy to be swept up in the glamour and daring-do of the sweep of aircraft wings, but these combats were often a fight to the death and the very future of Britain and indeed the ‘freedom’ of much of the world hung so tightly and uncertainly in the balance at the time.

In such a context, I want to know more about the man whose aircraft is to feature in my painting and also to understand what I can about the fates of all the protagonists involved. It is one of the striking features of the accounts of pilots who either met their opposite numbers from German aircrews, or perhaps flew close alongside them as they struggled to ditch or escape from stricken aircraft, that they would notice how much alike they were to themselves and the compatriot pilots of their own squadron. 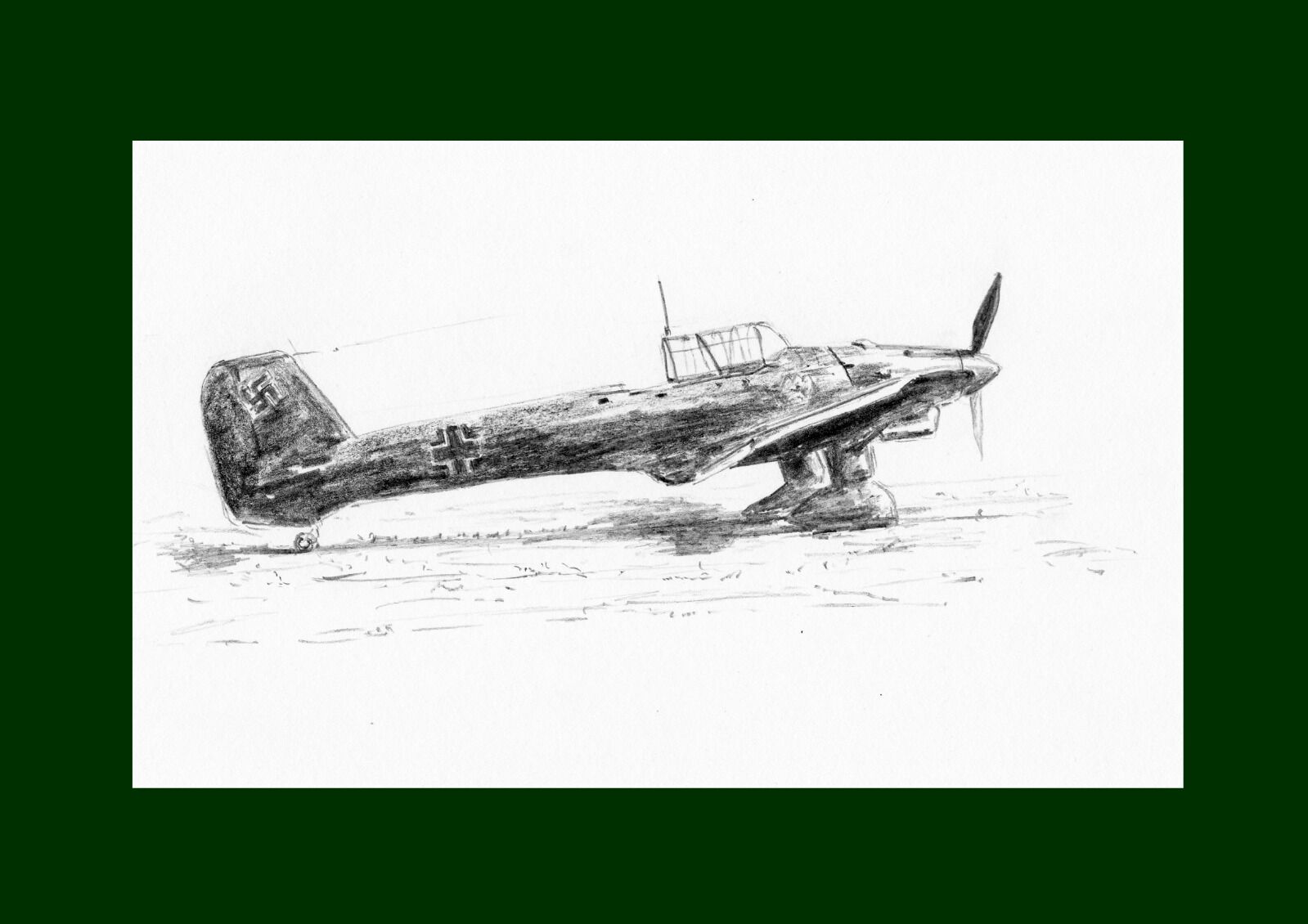 The Stuka on Ham Manor Golf Course
It appears in this instance that the pilot, Oberfeldwebel Kurt Schweinhardt, and radio operator, Oberfeldwebel Willi Geiger, of the Stuka that landed on the golf course were both taken prisoner. Both pilot and radio op were injured; Oberfeldwebel Geiger badly so and later died of his wounds. Having found several accounts online of this event, it seems there is some speculation as to whether the radio operator was actually shot by an overzealous member of the Home Guard on the ground, rather than injured in the preceding aerial combat.

Whilst events like this may have happened, it seems unlikely in this case. I found that Alfred Price had included in his book a firsthand account by Michael Wilcox, a young lad at the time whose home was on the golf course. He recalls running out with his father to find the downed machine, describing how they were first on the scene, how the aircrew painfully climbed out of the aircraft, guarded by his father with his revolver until the family’s gamekeeper arrived and was able to help bind the Germans’ wounds. All of this seems to refute the other version of events and being such a detailed first hand account from a named individual seems to me to be the most reliable available source.

And so to Sgt. Whall, the young man who less than 20 minutes later would find himself struggling for his own survival as he sought to bring his crippled, burning Spitfire down safely on shallow water at Elmer Sands, off Bognor Regis. The painting is after all, in my view, ultimately a tribute to him and those like him. A visit to the most excellent website of the Battle of Britain London Monument soon reveals the Page on Basil Whall. It is an excellent first port of call to find out a little more about the individual aircrews of the Battle of Britain. It has a short biography and usually a picture of every allied pilot/ aircrew involved in the battle, around 3000 in all: Churchill’s ‘Few’.

There is a picture of Whall there- he looks a likeable chap with an easy smile, and as with most of these guys, he looks so young. He was to die just less than 2 months later, after a combat over Beachy Head, when his Spitfire spun out of control during an attempted forced landing after combat with a Ju. 88. 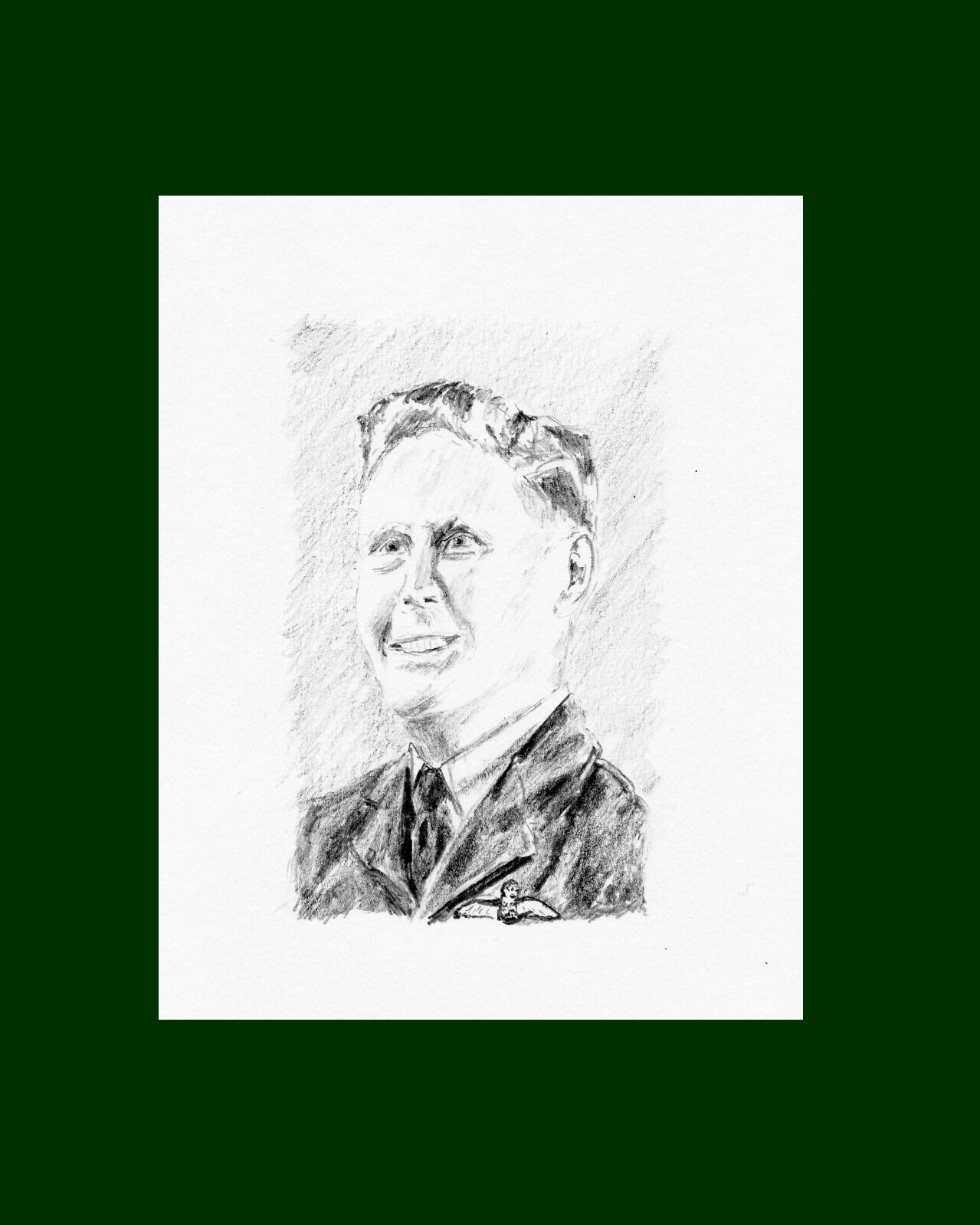 A portrait of Sgt. Basil Whall
He had joined the RAFVR (Royal Air Force Volunteer Reserve) two years before the war and was called up at its commencement. Earlier in the year, he had twice been posted to Norway and involved in heavy combat there with 263 Squadron. This seems to have been a most remarkable episode, which I feel I will have to study further when I can. He was deservedly awarded the DFM (Distinguished Flying Medal) for his actions there. During the Battle of Britain, he flew with 602 Squadron and appears to have been an eminently brave and successful pilot. 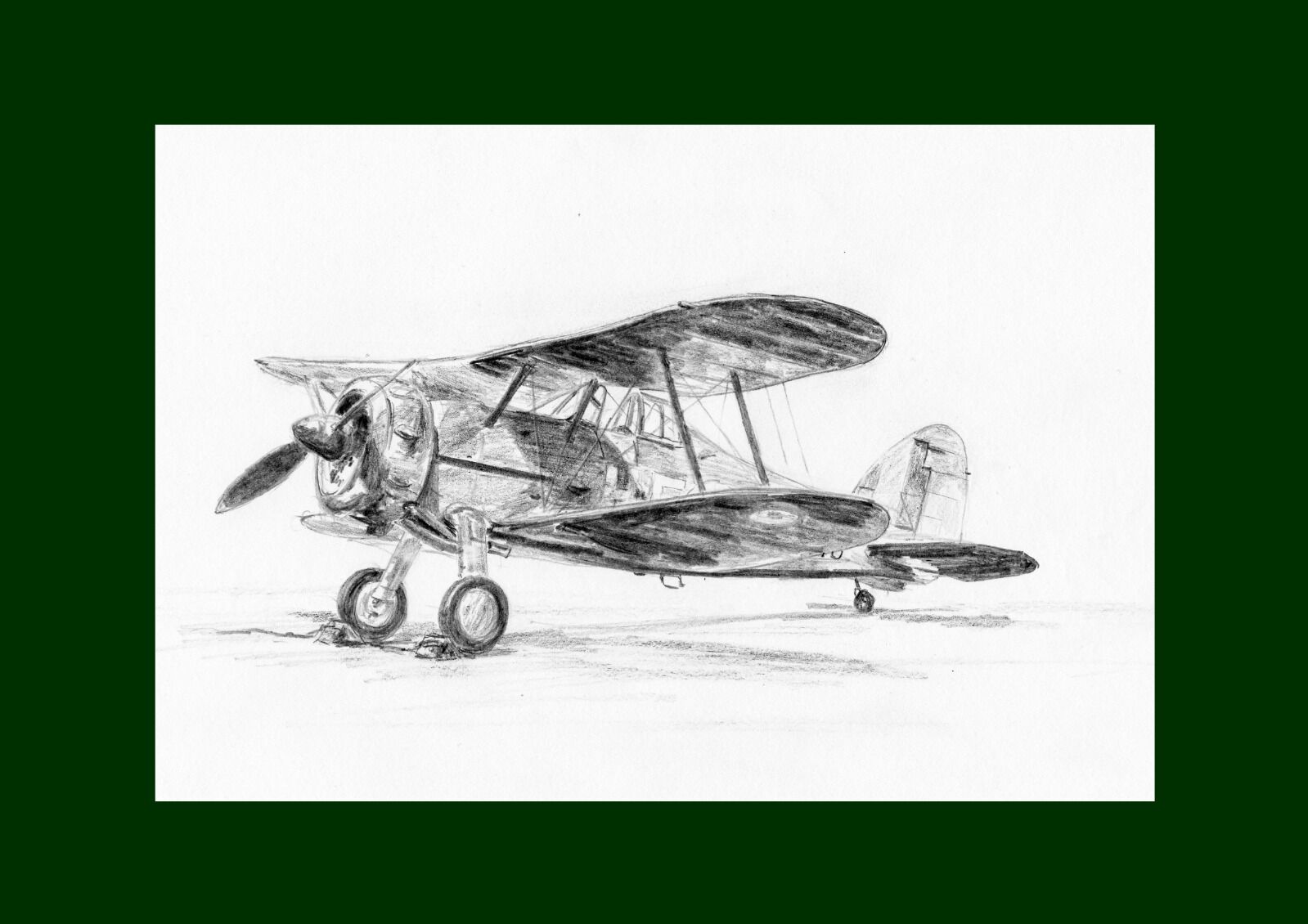 One of the 263 Squadron Gloster Gladiators, flying from a frozen lake in Norway
I was struck reading this short biography to notice that he was buried at Amersham, in Buckinghamshire. This was just a few miles from where I had lived and worked for many years and a town with which I was quite familiar. I had even walked through the churchyard where he is buried a couple of times (though not seen his grave). A little more searching on the internet revealed that he had lived at nearby Amersham Common before the war, where he worked as a wood turner. 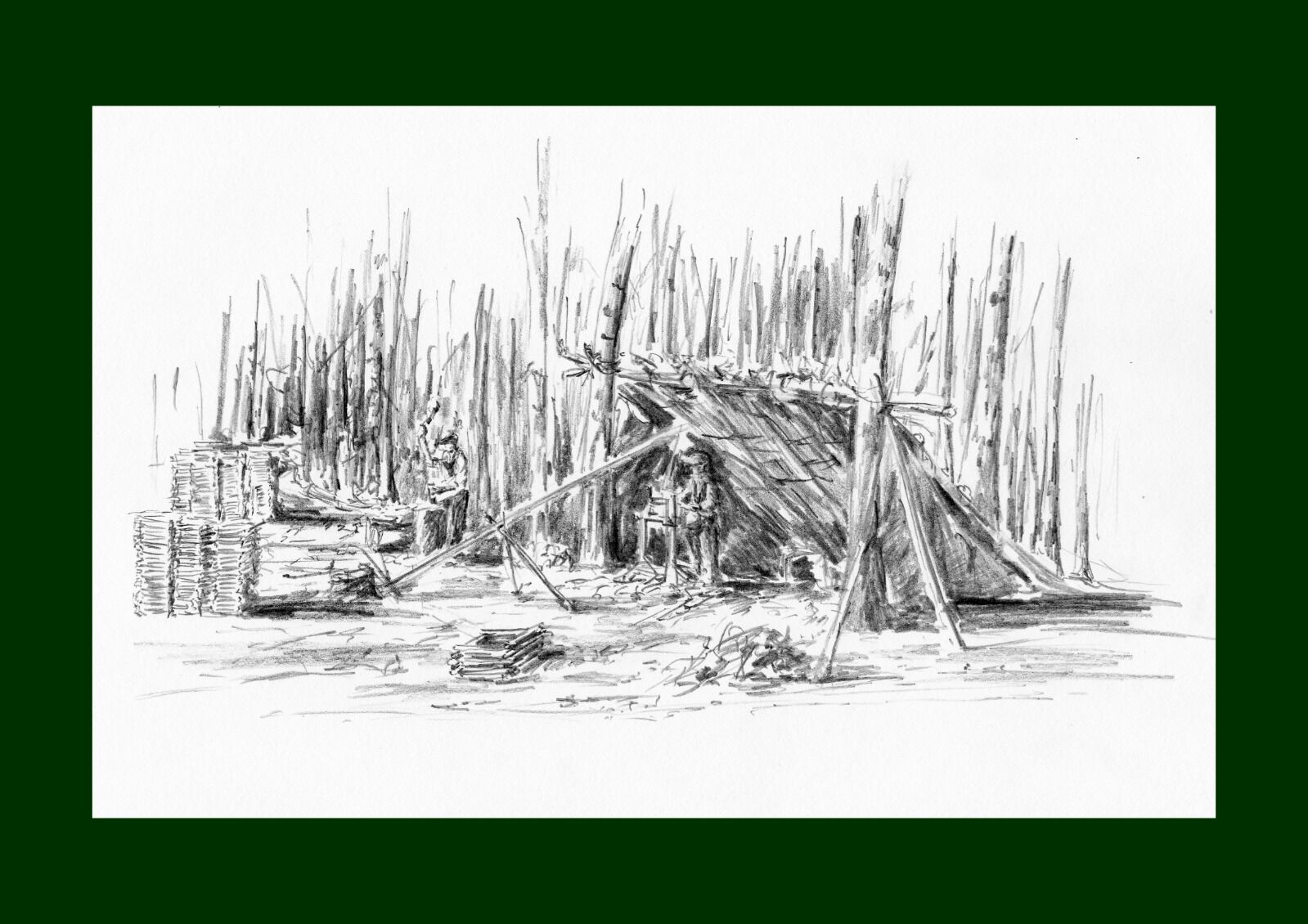 A typical woodland camp such as Whall might have worked in before the war
As part of my previous job at the excellent nearby Chiltern Open Air Museum, I had been involved in recreating working displays of traditional woodland craft skills and the woodland camps that such craftsmen would have worked in, as they were typical of the area. It was easy to imagine Whall working peacefully before the war in such an environment.

It really brought home the contrast between this and the furious battles he was to find himself in, and lose his life in, only a year or so later.

Now, lost in thoughts about Whall's life and experiences, I needed to find a way back to the practicalities of creating a painting good enough to help commemorate this brave young man...
Next
Previous