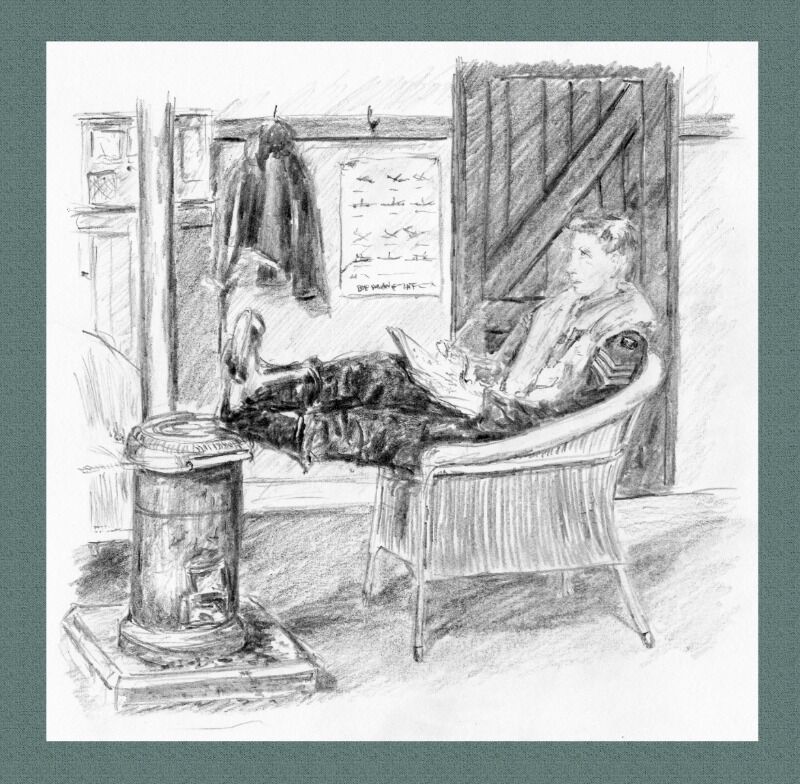 4. The Scramble Bell and a Combat Report

05/01/2021
Seeking a composition, I hear the sound of a Scramble Bell in 1940. I find only more questions, and how studying the original Combat Report bridges a gap of time and place.
(Part 4 of a series on creating an original Battle of Britain oil painting.)
Having found out so much about the pilot who was to figure in the painting, I felt I could lose my way with all this information. So much of it is so striking, overwhelming; it sometimes seems so hard to return to the actualities of creating art. My actions and efforts always seem so trivial in the face of the immense bravery and sacrifice of the men whose aircraft I am painting. There is a part of me that sees, however, that by creating the painting and by pouring the best efforts that I can into it, I may in some way help to serve to perpetuate their remembrance. It increases my determination to make each painting just as good as it can be.

It may seem that little I have written about so far has much direct impact on the composition or form of the painting. Hopefully that side of things will soon become clearer! All the time I am garnering this information, sights of whirling aircraft are in my head, and the sounds of roaring Merlins or the feigned calm of the chat at dispersal, waiting for that bell, and the call to scramble. 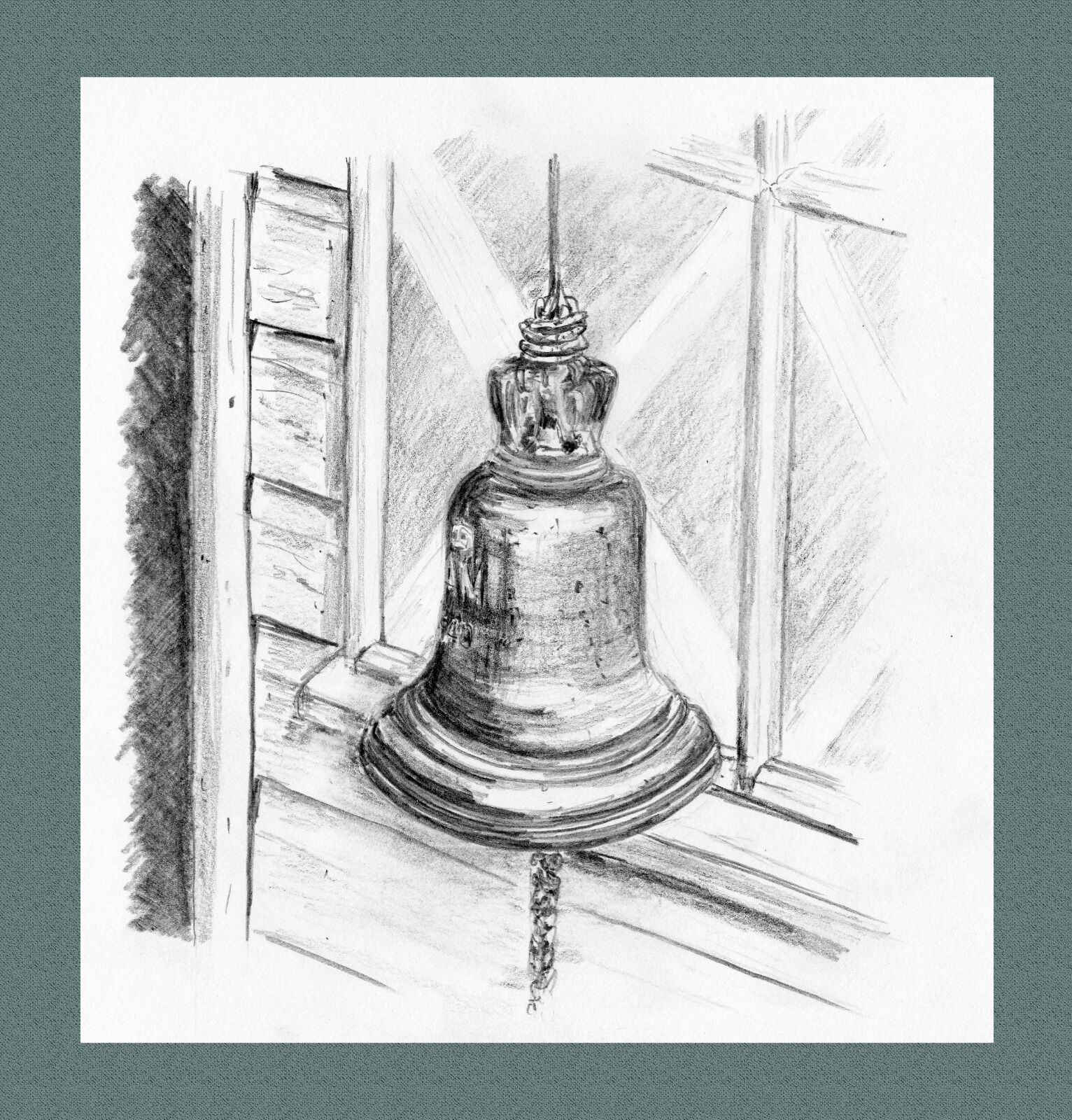 Scramble Bell outside dispersal hut.
There is in my head the empathy for the unknowable mix of fear, courage, exhilaration and immense fatigue that these young men must have been experiencing, made all the more poignant in this case by the discovery that Whall’s Squadron (602) had been on readiness 16 hours a day, for the previous 5 days. They had just been stood down and retired to the mess for not more than about ten minutes, before the call to action for this combat came through. All this knowledge, I think, is fundamental to the painting. I can’t pretend that I will know what it felt like to be there, but it puts me nearer to some understanding of the magnitude of their achievements and I can’t help but feel that this gets injected into the art too.

More practically this research has helped a lot as well. The creative process that brings about the art has, to my mind, two somewhat conflicting parts: inspiration and creative freedom. The views into the events surrounding the subject fuel the inspiration, but they also begin to lay boundaries for me as to my creative freedoms. After all, I am portraying a real event, at a known place and time, with known protagonists and known weather conditions. Suddenly, it seems as if the boundary for creative freedom is quite small, but I think that this helps make the painting more ‘real’.

It also creates more work. I have begun to think about possible compositions. I know that I want to show Whall’s aircraft and the Stuka on the ground. I can’t decide whether I want the viewpoint to be aerial or terrestrial, and this essential requirement of showing both aircraft throws up several other problems. A couple of compositional ideas have however now come to mind. There is after all a very good photo of the Stuka on the ground, with a group of Home Guard standing proudly in front of it, presumably taken later that day (by the following day the aircraft had been heavily stripped of parts). It immediately suggests a painting from the ground with the Spitfire curving upwards again back in to combat. The other would be to go for the aerial view and show Whall’s aircraft overflying very low over the Stuka.

Whall’s own Combat Report states, about the Ju87:

“ ...and saw it land at Poling apparently intact + pilot captured. I then followed about ten Ju87s retreating about 2 miles out...”

Trying to reconcile this with Michael Wilcox’s account (from the ground) is tricky. It seems that the ‘capture’ of the pilot would have been a good few minutes at least, after the Stuka set down; for Whall to have caught the other Stukas up so quickly would suggest that he didn’t hang around over this one for long. My feeling was that perhaps the fact of the capture was relayed back to the RAF station and thus he was able to include it in his Report. This must have been written at least a lot later that day, as Whall’s forced landing on the sea meant that he didn’t get straight back to the base at Westhampnett after the combat.

I also think that his report of the location of the Ju87’s landing site as being ‘at Poling’ suggests he didn’t pass that low over it, or surely he would have noted the fact that it was on a golf course - W. E. Johns, seasoned RAF pilot and the author of the ‘Biggles’ and ‘Worrals’ books, has for one, described how they are fairly obvious landscape features from low down in the air.

As an aside here, I will say just how remarkable it is to be able to obtain a facsimile of Whall's Combat Report from the National Archives. It lies on the table in front of me as I write this and Basil Whall’s handwriting on this official looking form seems to provide a most visceral link back to him on those long tiring days. 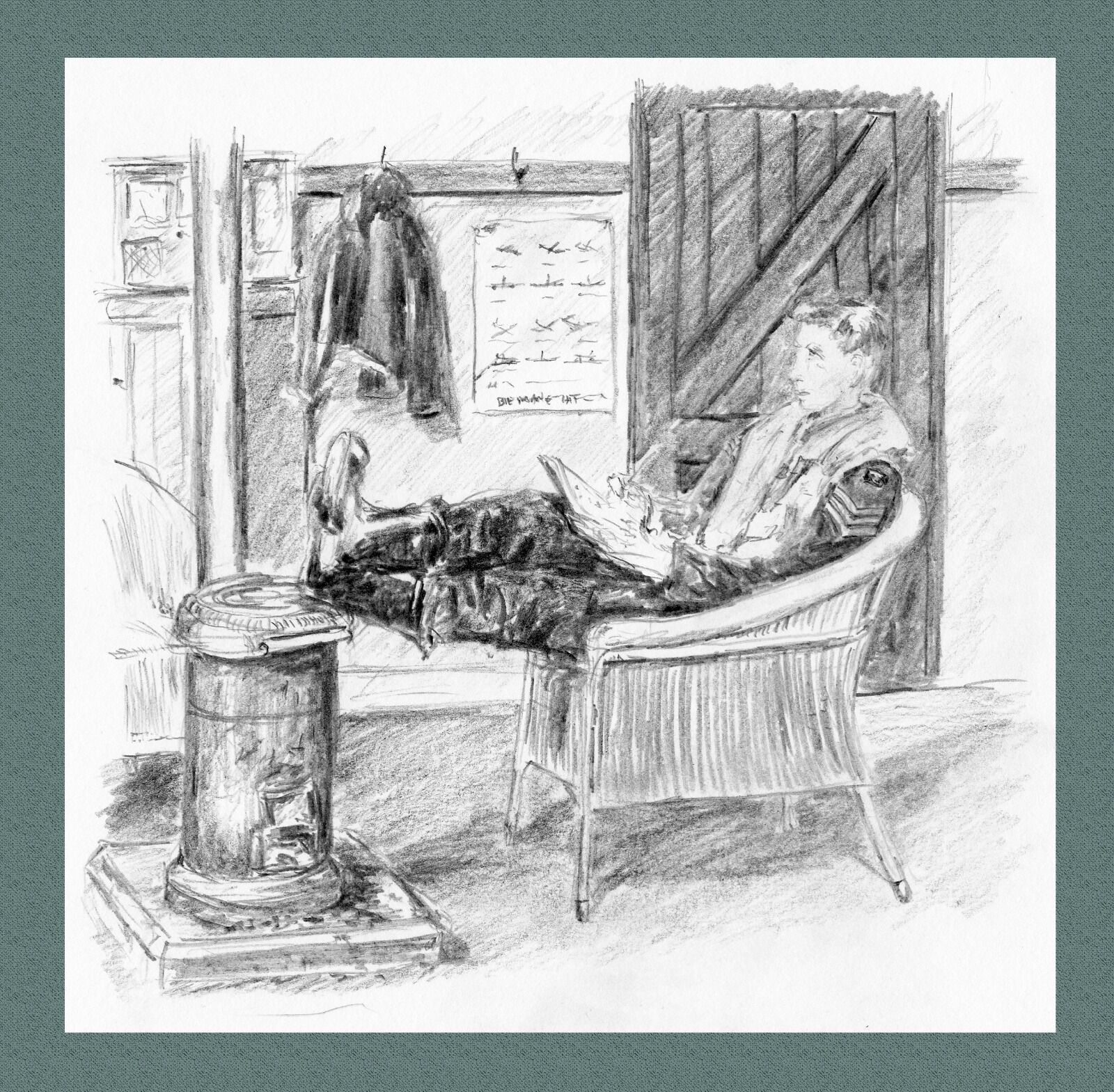 Sgt. Basil Whall writing his Combat Report at dispersal hut.
My feeling is that Whall probably came down just low enough and just long enough to see his adversary set down, and using the very visible nearby landmark of Poling Radar station, (one of the targets of the Stukas’ attacks) as his location reference in the seconds available, turned his thoughts to chasing more of the fleeing bombers.

From the point of view of the painting, this put both of my first conceptions out of the question, but in doing so showed me the only way I felt had to go. To get the Spitfire in the foreground of the painting, I would have to work from an aerial view and bring the painting down as low as I could explicably do so, to allow the stricken bomber to be visible on the golf course.

This meant I would have to find out more about two other things next. One was the golf course, the other was the radar station at Poling. Yet more research!...