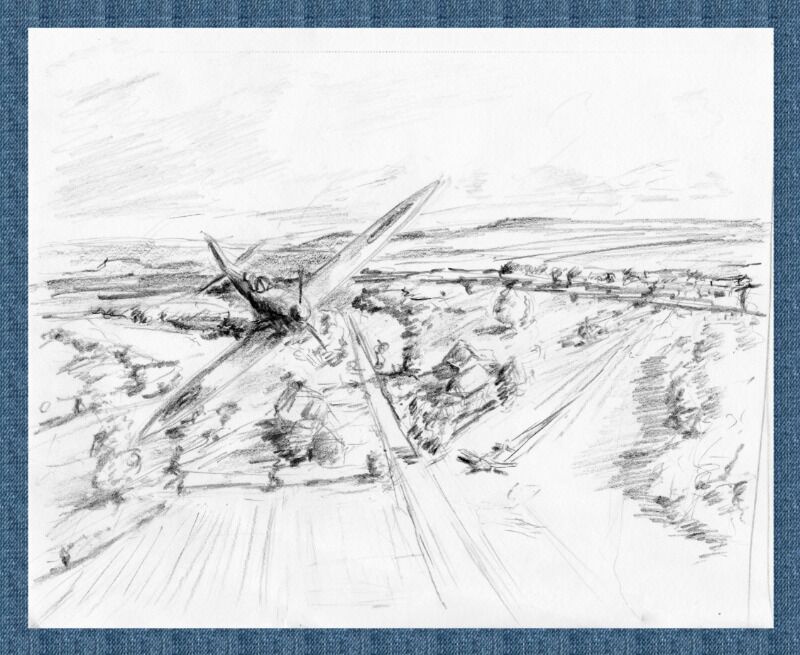 A working composition for the painting finally begins to emerge

6. Which Angle to View a Spitfire?

I finally find a workable composition, viewing the Spitfire at the end of a dusty summer road and under a bank of rolling cloud.
(Part 6 of a series on creating an original Battle of Britain oil painting)
I finally felt I had enough information to return to sketching out ideas for the painting, with the Spitfire in the foreground and the road and the 16th fairway stretching away from the viewer. To my mind, the Spitfire would be climbing away to regain height and re-enter the combat; my first sketches had the Spitfire pulling up away to the viewer’s left, showing largely its underside in the painting. These sketches certainly had something, but for some reason that I couldn’t put my finger on, they didn’t quite work. I persevered with the idea for a bit in a couple more sketches, but it really didn’t seem quite right. 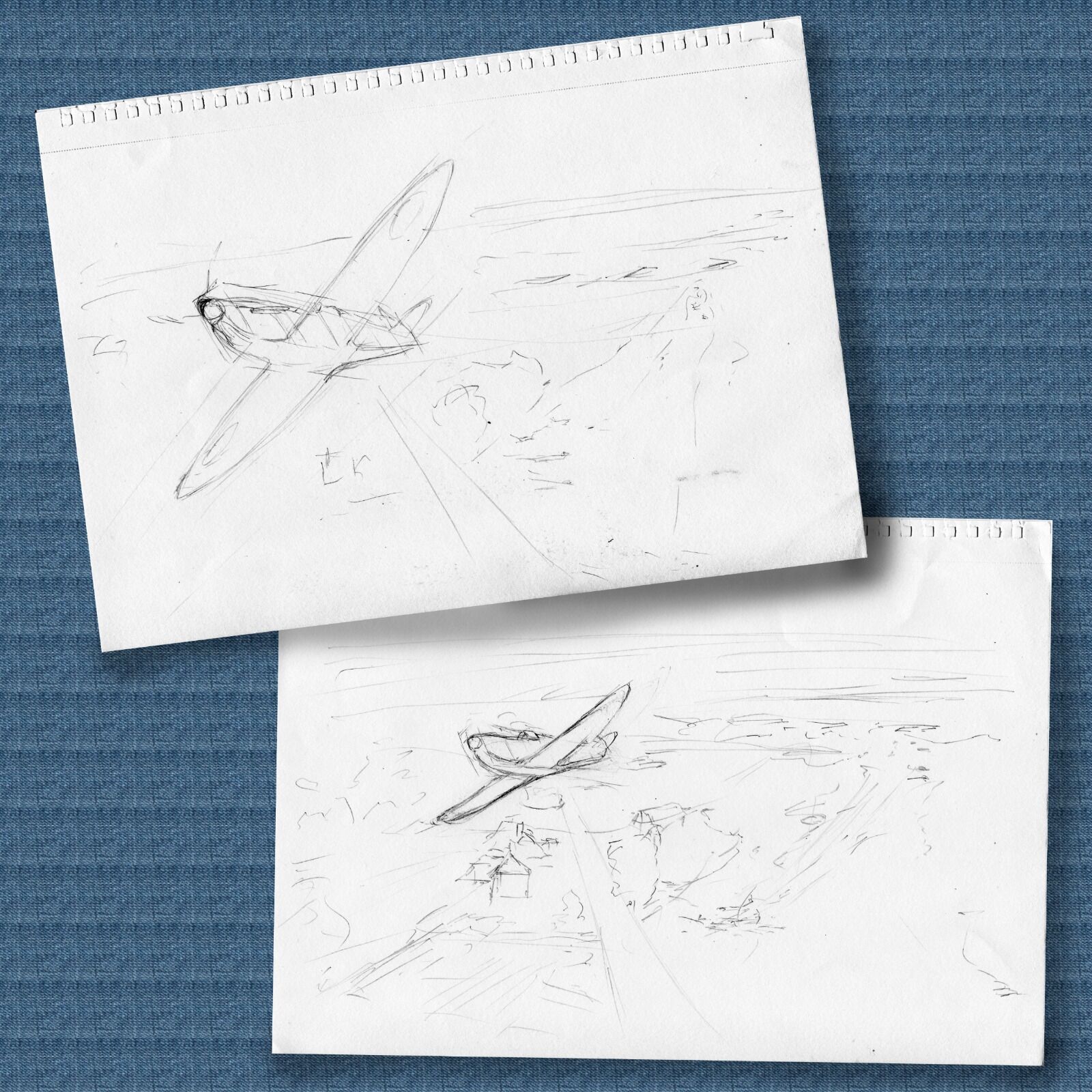 My early compositions, but something doesn't feel right
I felt the landscape view was really promising, but the more I looked at it, I realised the problem was that one’s eye was ‘pulled’ by the aircraft, straight up and out of the top corner of the painting. It suddenly occurred to me to try putting the aircraft in a different attitude. The moment of this mental transition is quite visible on the sketchbook page below. You can see me playing with the ideas in ‘thumbnail’ form and suddenly in the bottom right is the start of a sketch with the aircraft the other way round. 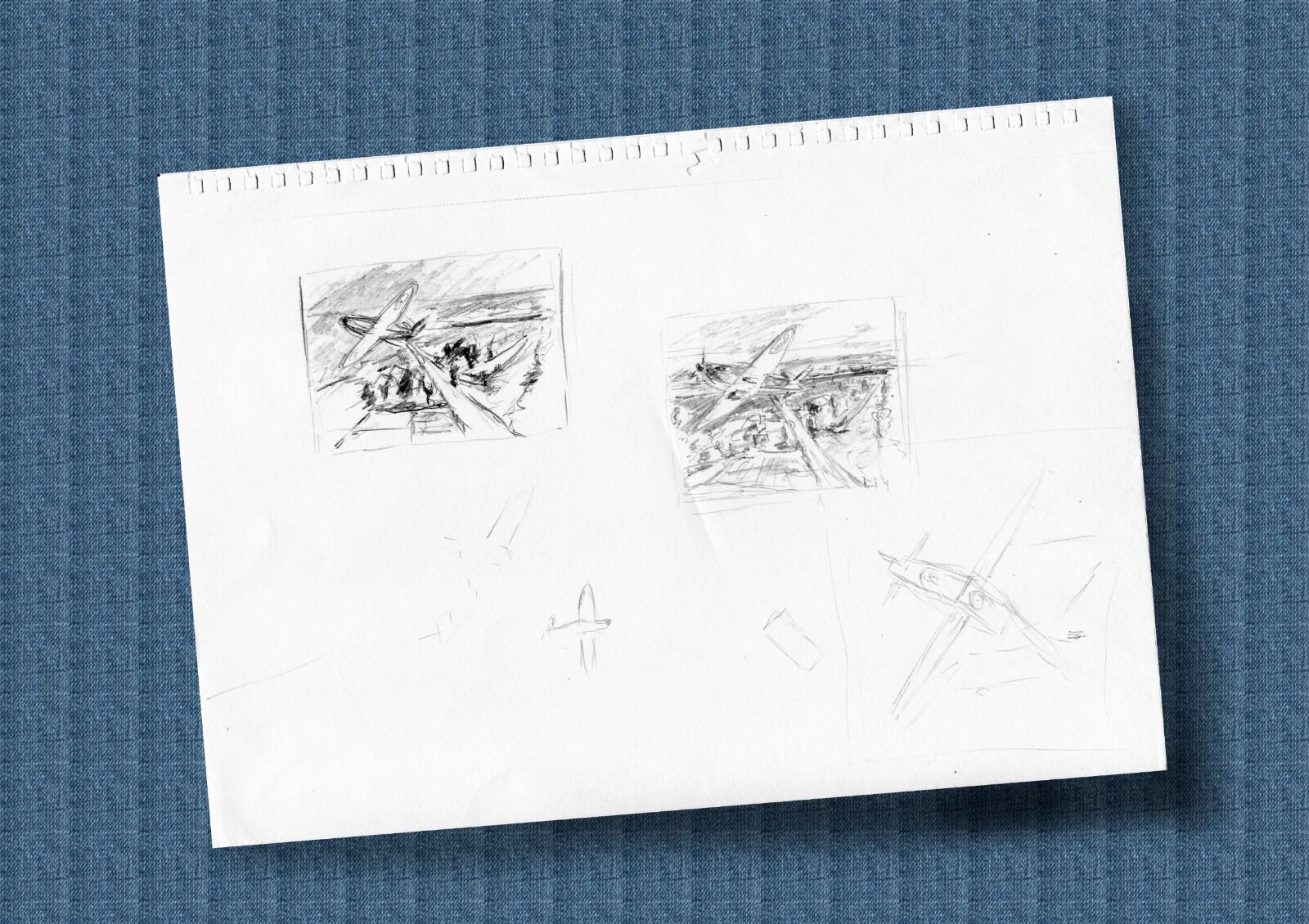 The moment of transition, as the idea of viewing the aircraft differently emerges in the bottom right hand corner
It seemed I was so excited by this different idea that I didn’t even bother completing the thumbnail and went straight to a larger sketch and made the other instinctive change of pulling the Spitfire down the page a little. I suddenly felt a lot happier, I could see it worked.

The road and the relative absence of foreground detail, together with a slight ‘lining’ in the foreground crop, gave an impetus to the eye to move on up and through the Spitfire, creating a great sense of movement in the painting. In contrast, however, the dark and incongruous shape of the Stuka on the ground brought the eye back from running away out of the clouds into the top corner. I also like the way the road at the end of the fairway with its dark line of trees and hedges again pulled the eye back to Whall’s Spitfire, helping to keep it the focal point of the work. 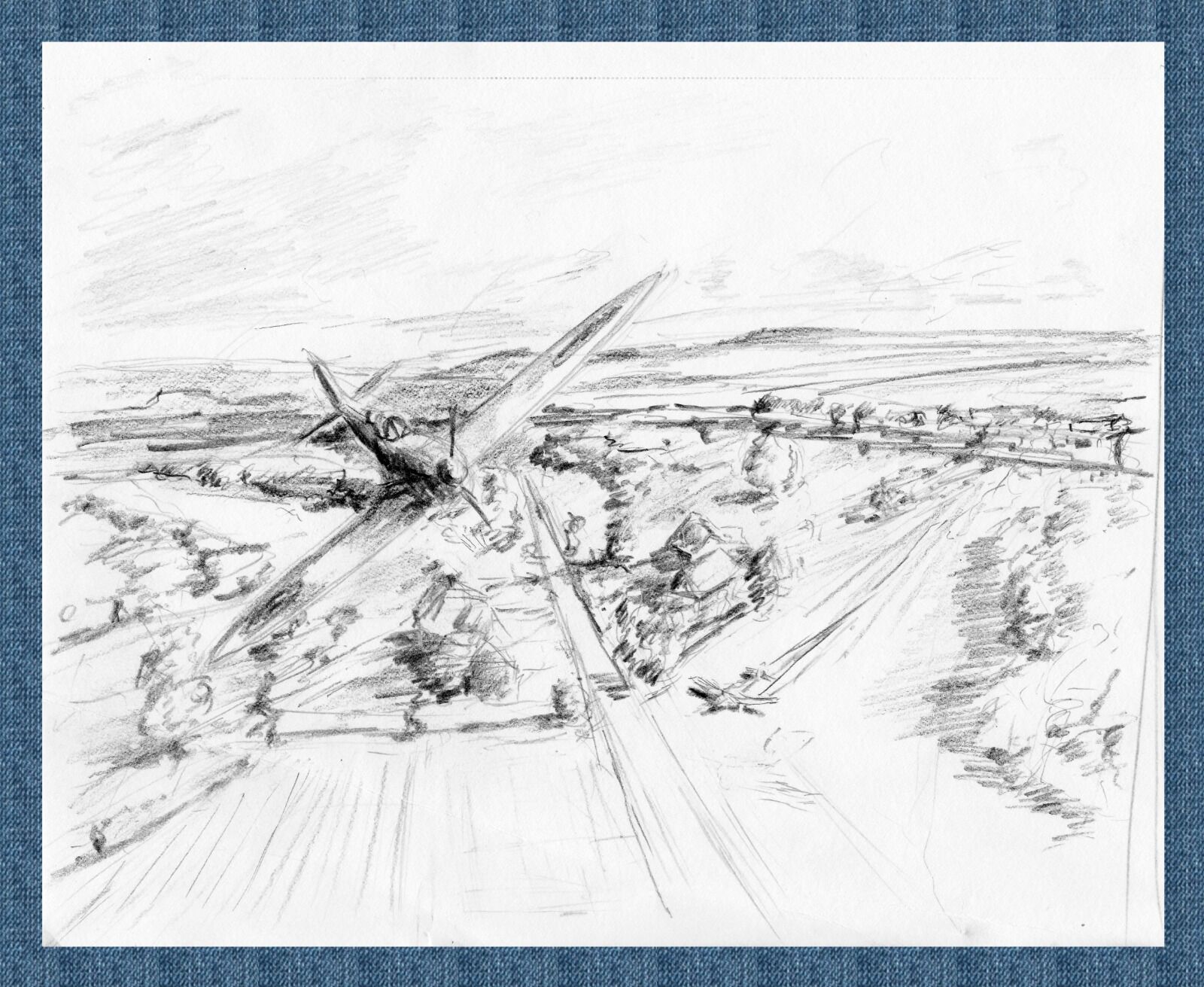 The composition I will use for the finished painting finally has life in sketch form
I worked this idea up to the more finished sketch shown above. Something in the exact position of the Stuka still didn’t feel quite right, but I did have a little leeway in its final position on the fairway. The rest of it, however, I really liked. By this point the sketches had also helped me to develop some idea of the tonal values of the painting, a really key component to getting it right. I wanted a lot of the ground to be very light but warm in value, relieved by a little shadow. This would reflect the early afternoon timing of the encounter and gave the opportunity to let both aircraft stand out well by giving them both strong lights and darks.

This fitted well with the known weather conditions; it was a warm sunny day, progressively clouding over. Using some good light tones for a lot of the sky, set against a bank of cloud rolling in from the right, would help suggest the right weather conditions. It would also give me a bit of room to play with some good contrasting tones in the clouds behind the Spitfire, to help make it really ‘sing’ in the painting.

I didn’t work the sky up much in the sketch, as I often find working in pencil that I tend to over darken a light sky by trying to get the detail in, but seem to be able to control this much better in paint on the canvas.

Just a little more work to get the sky clearly in my head then and finally I might actually start painting!…
Next
Previous