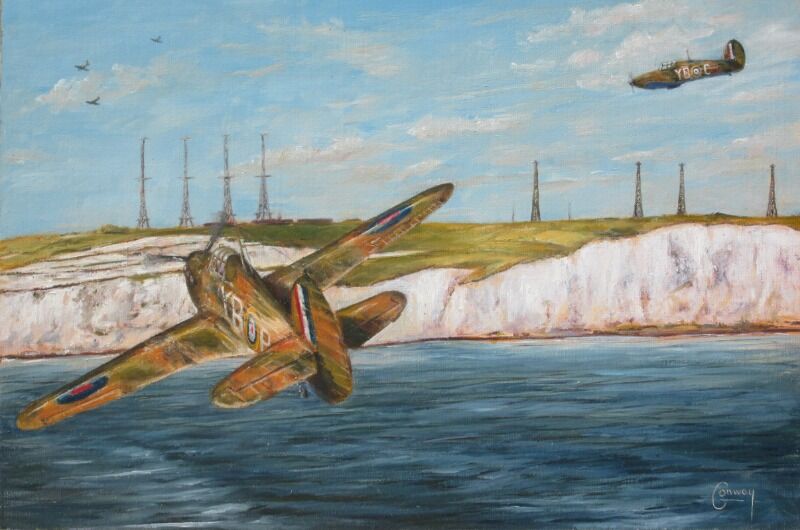 The Chain Home Radar Station at Swingate, Dover, (similar to the one at Poling), depicted in my painting "Back Among Friends"

5. A Battlefield with Golf, Radar and Large Greenhouses

12/01/2021
On how I found myself having to take a virtual round of golf, locate some missing 360 ft high radar masts and mentally rebuild a half acre of glasshouses to picture the ‘Battlefield’ of 1940
(Part 5 of a series on creating an original Battle of Britain oil painting)
I had by this point located the golf course, where this aerial combat had ended, on the map and it didn’t take long to find on the internet that it was still a very extant and active club. The location of the Ju.87 on the golf course was clearly described by Michael Wilcox. He describes running down the 16th fairway with his father, seeing the wheelmarks along the fairway and coming to the aircraft just beyond the tee. It seemed there was little artistic leeway in where to place the Stuka, and although the description probably seems really clear, it was actually quite hard for me to place this exact location.

Looking at Ham Manor Golf Course’s current website, it seemed that the course was laid out before the war and fortunately for me, because of the heritage of its design, it had been kept to largely the same layout since. With an aerial view of the area on the screen, the fairways of the course were easily seen, but which was the 16th? Living in Wales, it wasn’t possible to visit the course, but fortunately the club has a series of ‘cards’, one for each hole describing the hole and the nature of the ‘play’ for each.

It was still very difficult to match anything up from the cards with the aerial view, but eventually I found some features on the 10th hole that I felt matched up. Then I had to try and ‘play round’, assuming that each hole teed off near the hole of the last (and I am no golfer!). I slowly worked round, identifying features on each hole on the aerial view, and ascertained the location of the 16th and its tee. I had finally located where the Stuka finished up!

The next problem was Poling Radar Station. With its 360ft high transmitting masts and 240ft high receiving masts, it would have been a very visible feature in the landscape at the time. Even more so, as the Stukas’ attack, moments before, would have probably put some amount of smoke and dust into the air, not to mention the damage to the towers. If my painting was to include it, it would have a huge effect on the composition; if I was to exclude it, it would probably limit my choice of view point a lot; but where was it, where were these huge towers? 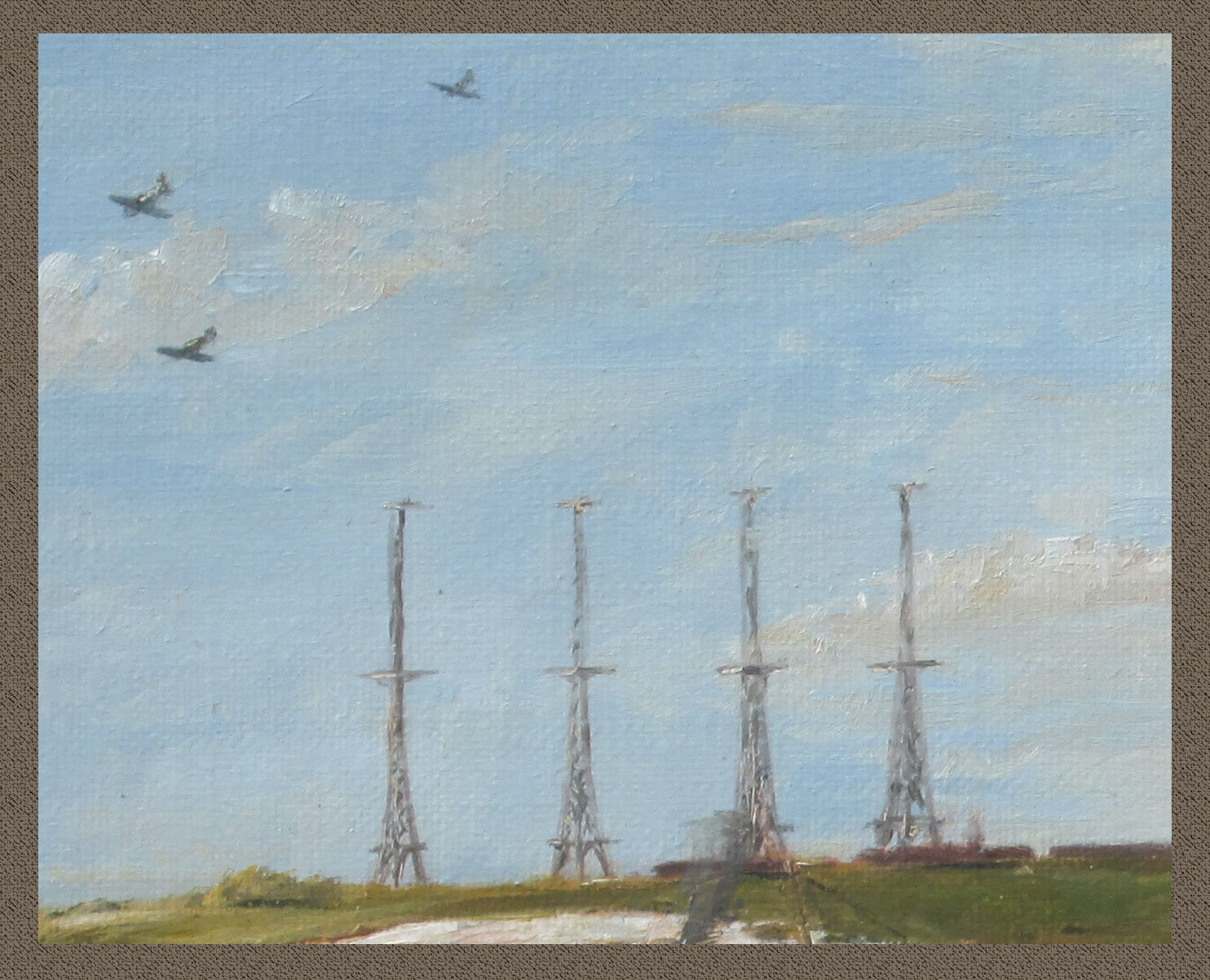 Chain Home radar transmitting masts (detail from the painting "Back Among Friends"
They are all gone today, a photograph online showed the site as it is now. A quiet and beautiful ploughed field, with a small stream and some woods to the side, a far cry from how it must have looked on the 18th August 1940, with bombs exploding all round. Still no idea of the location of the masts though. Eventually, finding old maps online, the site was shown in a later post war map, and the masts shown seemed to fit with the typical array of a Chain Home radar station. All of this was less than a mile from the landing site of the Stuka, so I would have to think about this while planning the painting. 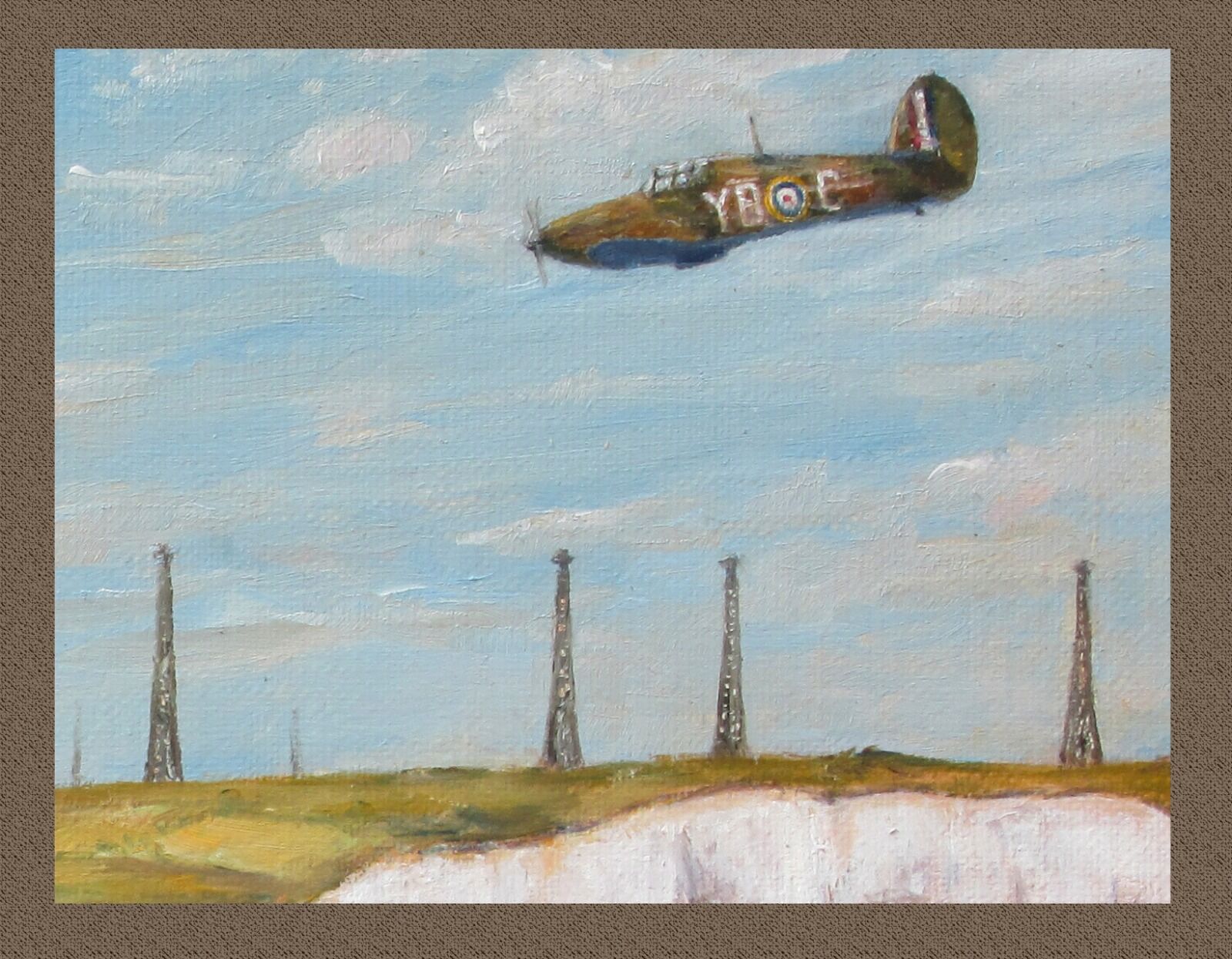 Chain Home radar receiving masts, with a passing 17 Squadron Hurricane (detail from the painting "Back Among Friends")
I am blessed in my aviation art endeavours in living in an age with the existence of Google Earth. I used this next to have a look at the location for the painting from different angles. I was particularly struck by the very prominent feature of the very straight ‘Manor Way’, passing somewhat unexpectedly right through the middle of the golf course.

I had assumed this was a modern road, but looking at a 1930s map online again I could see it there. Suddenly something slotted into place. This was such a striking feature from the air and it had great potential to add depth and perspective to the painting. A view along it would have the Ju.87 very near it and if carefully handled, would allow me to leave the radar station out, which in this case seemed a good idea, as it was becoming at risk of hijacking the whole painting! 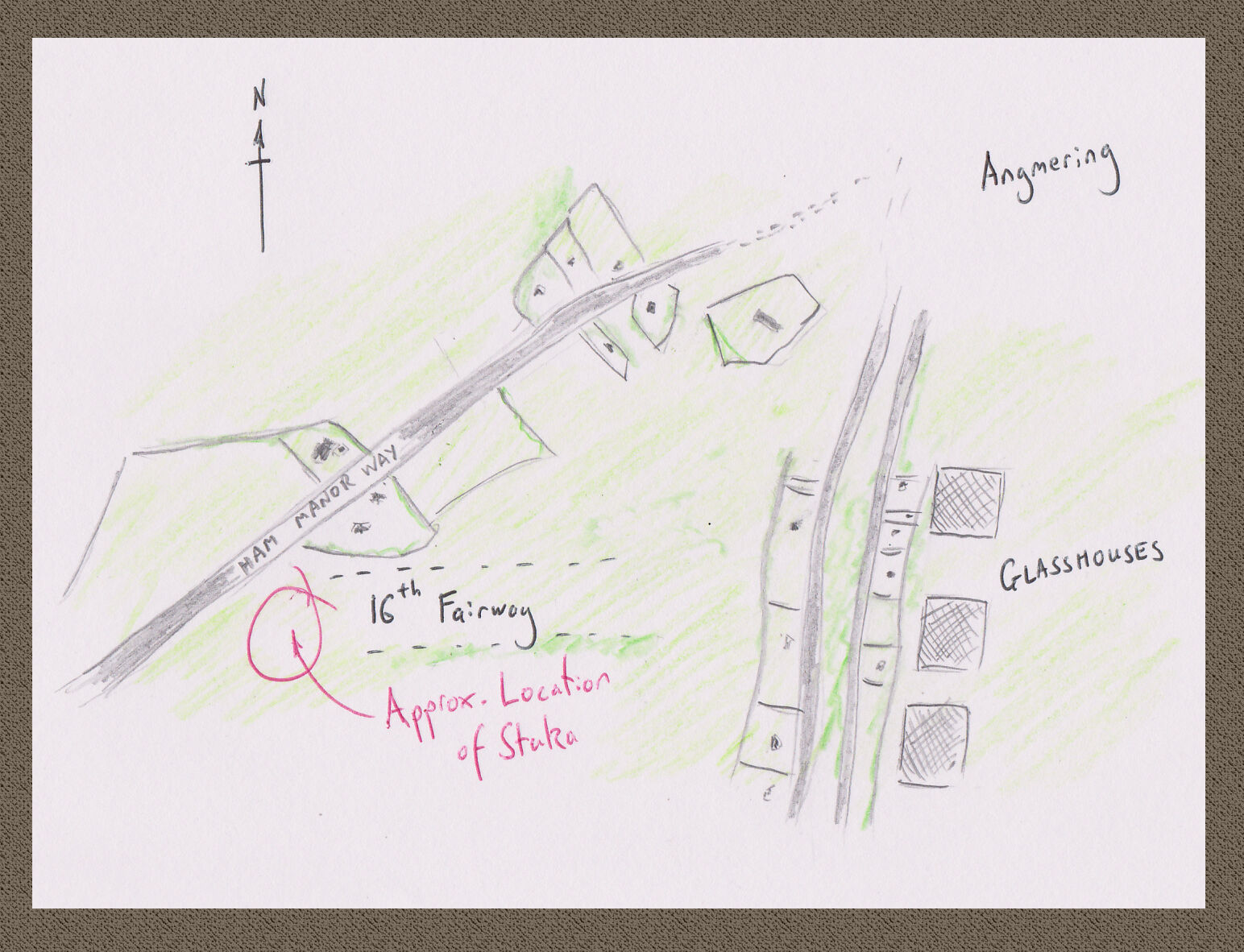 Sketch map showing Ham Manor Golf Course at Angmering as it was in the Thirties
Whilst on the 1930’s map, I also noticed the rather striking (and now all gone) massive glasshouses just beyond the golf course. The agricultural historian in me was fascinated and a couple of hours were caught up in reading up about this local industry, all now vanished in a sea of housing development.

These glasshouses would be a noticeable feature in the painting, and I was able to find out enough about them to establish that they were probably pretty similar to large derelict greenhouses in the fields that I used to drive past every day on my way to work in Milford, Surrey. The development of the housing in the Angmering area seemed quite fascinating too; together with the old maps I was able to get a pretty good idea of which houses were extant at the time of the painting.

That seemed to have most bases covered, could I actually get back to some art work now?...