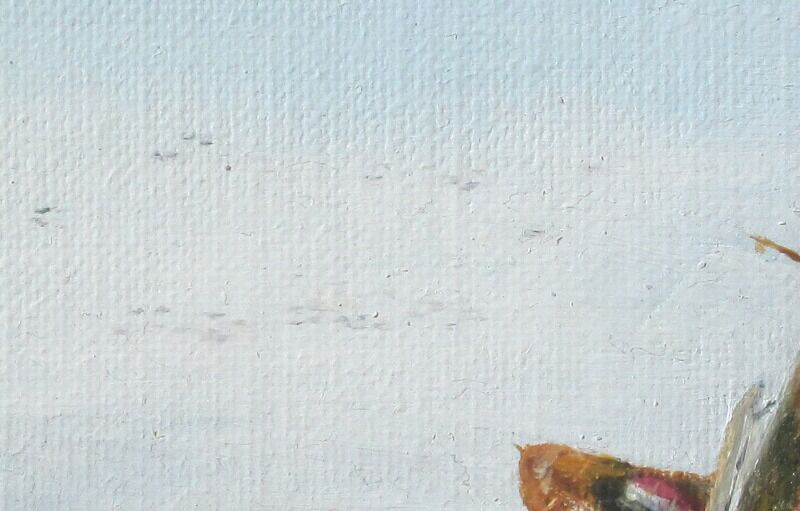 Blurred Smudges - See the painting 'Two Minutes to Close' in 'Hardest Day Hurricanes' for the significance of these smudges.

11/09/2020
The blank page of a word document is as intimidating to me...
...as the blank accusatory face of a canvas poised to start a painting. I have learned to overcome that of the canvas, with either sketching out details in pencil, and/ or painting a coloured ground which begins to set out the lights and darks in the painting. Not so easy with a blank screen and a keyboard. With the pictures, I know at the beginning that it can really only get better than a plain white canvas and so there is nothing to lose by trying. With words, I am less sure how to make a start, and yet they feel necessary.

The idea of a website to put paintings on was a difficult concept for me to start with. It felt too ‘display- ey’, rather self-conscious. I have always liked to do paintings and put them up on the side and leave them, knowing their meaning to me was enough and an even greater pleasure if others would notice them and find something in them. But to start putting the pictures out there seemed hard, it seemed too much like putting them in a really public place and then standing there pointing at them, feeling for all the world like Roo in Winnie the Pooh (“ Look at me.. look at me swimming!”).

I read something online recently though, that made me begin to accept it a little better, see it in a different light. It suggested that a website could be an ‘artwork’ in itself and instead of trying to construct an advert/ sales catalogue one could make it almost whatever one wanted to make it to be, and I can see that. I can see that I should view it like I view the paintings, which after all are windows into my view of the world, so maybe I can find a way to embrace ‘ the form’ of a website as an extension of that.

Which brings me back to the blank page, why write at all, after all I’m chasing the idea of using the paintings to express myself, it seems somewhat challenging to start dabbling in the art of wordsmithing too now. But I think I need to. From the moment I put the first painting on the website I realised it needed a little bit of writing with it. Just a short explanation of what it was about, to help the viewer see something of where I was coming from in creating it.

The concept of this became clearer to me when reading the Foreword to Len Deighton’s book ‘Battle of Britain’, where he noted that as his sketching developed he found himself adding more and more notes in the margins and by the time of his graduation from the Royal College of Art, he said he felt “that a picture is only as good as the context in which it is displayed”. He goes on to say “The truth of this is apparent for anyone who can look through a large photo archive with an expert ready to help. A blurred smudge- corners bent, and captions lost- is hardly worth wasting time with, until someone who can analyse the picture begins to explain what was happening”. To this I certainly concur.

If this is so for one picture, then how much more so for a collection of pictures that the website is starting to become. I look at them together and realise that without more context they are missing something, they seem a little random. There is a thread that holds them together, but I can’t really spell it out, because it’s entrenched in who I am. So, somewhat reluctantly and with significant trepidation I find myself here writing. Not only that, but by putting this on the website I am pinning the verbal equivalent of the first tentative brush strokes of a new painting up for anyone who cares to have a look to see.

At least the page is no longer blank.
Next
Previous