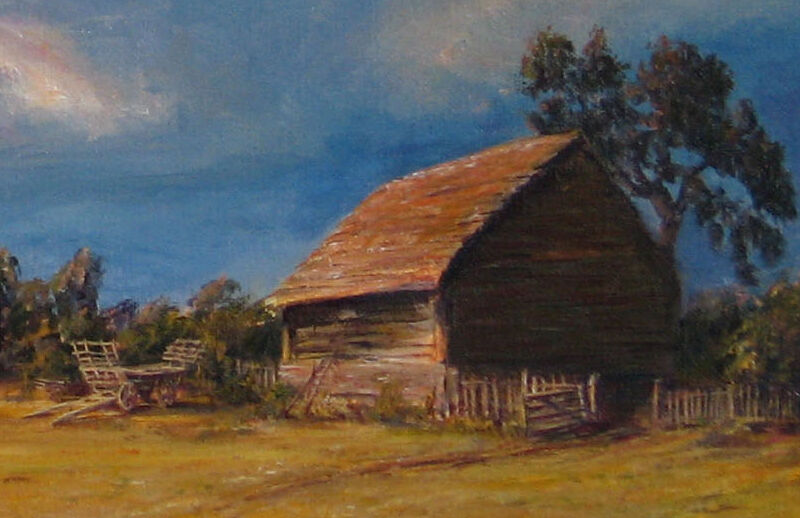 A hay wain- but from when? (A detail from 'Hurricanes Low', Hardest Day Hurricanes)

16/10/2020
If I am not out to catch a moment of an objective reality...
... on canvas, what am I doing? The genesis of each painting must come from that spark that is generated at the interface of the interaction of our brain with its surroundings, real or imagined (I was after all never present during The Battle of Britain).

I think for practical purposes most of us would work on the model of a shared objective reality which looks pretty much the same to all of us. (I invite you to sit on the sofa and you sit on it- it kind of works!). So that is a thing that you could set an image of on paper or photograph. So I guess that makes ‘realist painting’ a thing too. (Phew- almost talked myself out of a job!) But there is some wriggle room left there for ‘art’ I think. (The sofa looks old and shabby, in need of replacement to you, but to me, it is loved, with lovely patina of use, inhabited still by the presence of the grandparent it belonged to.)

The painting of that place and moment in time is a momentary insight into someone else’s view of the world. In truth it probably mostly leads us back again mainly into our own view of the world, after all the same subjective use of sight is used to view the painting too. But the very fact of the painting forces us to take note of that moment of spark that has generated the painting. For an artist to have poured tens or even hundreds of hours into a painting tells us there was something of significance in that interaction for them.

By the same token then, must enjoying an artwork by someone else also be a similarly social interaction? This seems contrary to experience on the face of it to me. Let me take the first time I saw and was bowled over by one of Constable’s paintings, take the Hay Wain for example (and I don’t in any way compare mine to his, I just feel that insight will come more readily from thinking of someone who is really a master of their art).

When I saw this painting, I in no way felt my response to the painting was any kind of interaction with the artist. I felt if anything that it offered an opening back into my own experiences of place and moment, a vivid recollection of the apparently unending timelessness of the heat of a summer’s day by a mill pond. There was no sense of enquiry as to Constable’s intimate knowledge of the banks of the Stour, his interest in cloud formations or even his concerns about selling his rural paintings (remarkably this one remained unsold when hung at the Royal Academy). It might seem obvious from my writing that I have reached out to try and understand more about Constable and his life and work, but this has been subsequent and not tied up to my first and most visceral response to his works.

So I remain unsure as to whether the destination of journey of the experience is to Constable’s experience of a summer day in 1821, or to one of my summer days nearly a couple of hundred years later. Perhaps it’s both,... or somewhere else. Is that a temporarily distanced form of social interaction, I’m not sure?
Next
Previous