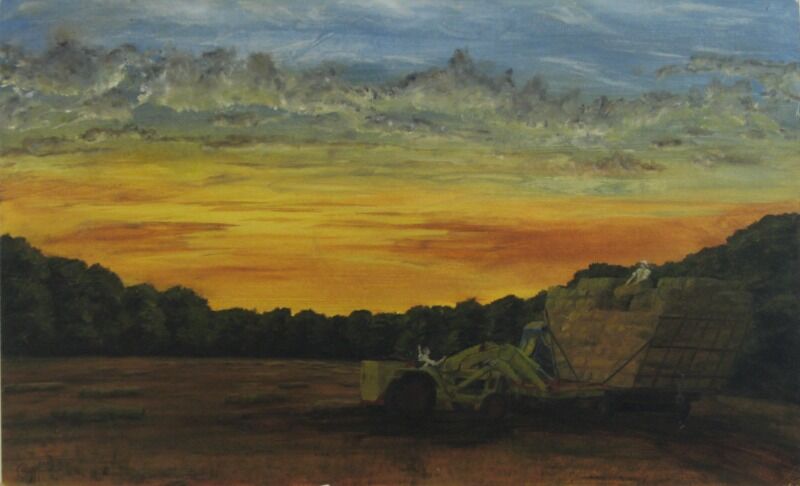 A painting made back when I worked on this farm, of us loading one of the (smaller!) bale trailers

06/11/2020
A summer’s day that never seems to end...
...and still the heat keeps growing. Constable’s summer day looks lazy, the farm workers on the waggon indolent, bucolic. For me, the heat already seemed to be inside my head, the constant assault of the sun combined with the requirement to stay focused and keep doing lots of new things right, or not to really screw anything up at least. Time and experience since has taught me, I should have been wearing a hat, and I needed to drink more water.

Other things, no-one could have told me, they just needed to be learned or gained by doing. How to move bales with a minimum of effort, using the knee to lift them and arms to direct the momentum gained thus. How to work on top of bales without constantly moving around, thus avoiding the invisible gaps between the bales that constantly made you stumble. Rhythm. A hard calloused skin across the middle of your fingers, that just slowly appears through repetition of the task, and avoids the feeling that each pair of bale strings is like two cheese wires on your hands, (gloves were hopeless).

We loaded the bales on the trailer, Tom used a loader on the tractor to put eight at a time on and then they needed a certain amount of rearranging (by me standing on the load) into a well rehearsed pattern, which meant the whole load could be secured by one rope across the top from back to front.

He showed me the brilliant knot used to secure the rope. I later knew it well enough to tie it whilst hanging off the load with one arm crooked through the framework on the trailer to hold me whilst I tied it, but that day I couldn’t seem to copy Tom’s explanation at all.

The journey back went okay, much to my relief. With the bales on the load there could have been an eight mile traffic jam behind me and I wouldn’t have known most of the way, except on the sharper bends where you could briefly see the road behind (fortunately it was clear).

Tom and I unloaded the bales into one of the old farm sheds, off the trailer and in through a stable type door. It wasn’t an efficient form of moving bales, but this was where it had to go.

There were probably some forty or so left to unload, when Tom was called away to help Jim with something in the dairy. I was left to finish the bales off. Chuck three or four off the trailer, climb down, pickup one at a time, squeeze in with the bale through the door, across the shed and then haul it up on to the pile. Then more often than not I had to clamber onto the pile to get it in place properly, then clamber down and back do the next one. It felt like it would go on forever.

Tom returned as I finished. He took one look at me, the kind smile came out again and he said “you’ve worked really hard today...go park the trailer up and call it a day” It was only 4.30, my hours were 8 to 5, but I was all in. It seemed like a total blessing to be allowed to stop, and at the time I figured that maybe this was how things were done if the day’s work had been hard.

Of course later I realised that it wasn’t. In the subsequent 3 years there, I never left early again. Many was the day I did similar tasks late into the evening, day in, day out, and just felt tired at the end of it. It should really have just been an average day’s work that day. But for me the combination of heat, constant learning, the strain of using lots of undiscovered muscles, despite being generally very fit (I was a keen walker, runner and cyclist at the time) and most of all being yet to discover that unique skill of paced stamina required for farm work (which is somehow different to that required to complete a long run) had left me almost in pieces.

Thanks to Tom’s kindness I had made it through that first day though, and it would get easier. I had started to learn the art of ‘plodding on’.
Next
Previous