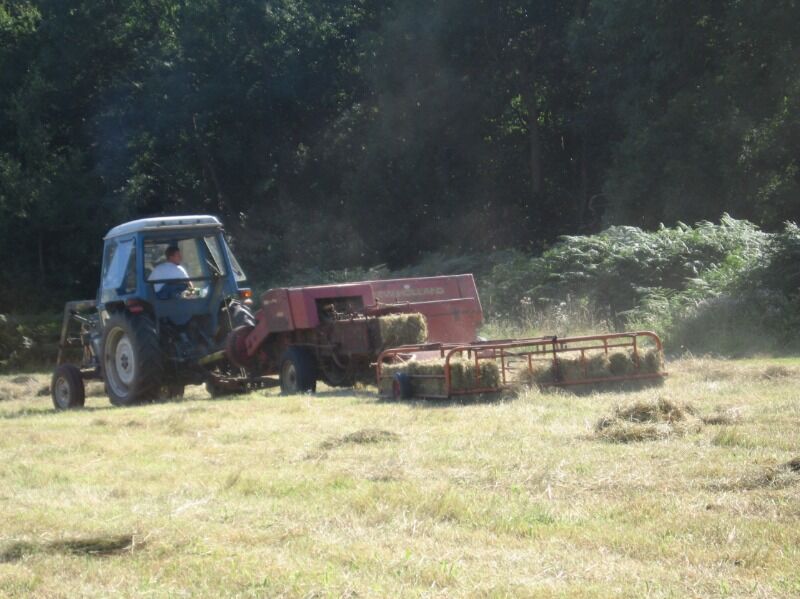 Me baling years later, but with almost identical kit to that day

30/10/2020
The heat of that first proper day...
...of Sussex farm work just seemed to keep growing. The other thing that kept growing was the apparent gradient of the tractor driving learning curve I was on. I had been a pretty good student on the college course that I had taken in the previous year and had achieved the tractor driving tasks we had been set without too much difficulty, so thought that this side of things wouldn’t present too much of a challenge.

Tom, as I’m calling him (the farmer’s son), explains to me that we need to fetch in a few acres worth of hay from some fields they rent on the far side of the village. (Most of the near part of the farm was used for silage making, but they still cut a few acres of meadow hay to feed to calves, who did much better on it).

Jim (the dairyman) helps me hitch up a trailer and I’m to follow Tom down the road to the field a mile or two away. Jim had also seen my ultra-slow tractor driving demo that morning (see previous post) and it’s hard to describe the look on his face as I looked down to him from the cab and asked what gear I would safely be able to get up to on the road, thinking particularly about the seemingly enormous 25 foot or so trailer behind me. (These tractors- 1980s Ford 6600s, have 8 forward gears). “Top the whole way...” came the answer “... you’ll have the milk floats wanting to overtake you otherwise.” There was that kind smile again, that was beginning to seem all too frequent that morning. But he could see my nervousness and added over his shoulder, as he turned back to the dairy “... you’ll be fine, just concentrate on doing the steering bit!”

He was right. I was fine, by the time I reached the field I was getting used to the dizzying (23 mph!) top speed. That achievement over, another loomed up. Before it did, I briefly saw that it wasn’t just me taking on new responsibilities. Tom started walking round the hay field when we got there, picking up wisps of the cut grass/ hay, reaching under lumps of it, feeling it and twisting it in his hands. Was it fit to bale, or not? I could see the indecision in his face. “ ...Dad usually makes the call on this...” and he looks across the field.

I know now, having had to make that decision myself many times since, how hard it is. Too early and your lovely hay bales are woefully heavy, and streaked with mould inside from the damp still stuck in it (or at worst it heats up in the stack and self ignites). Leave it too late and the hay has turned from a beautiful green, fragrant, mouth watering stock feed, into something that is probably more the livestock equivalent of ship’s biscuits, overdry, brown and to be eaten under sufferance, or even worse, ruined by unexpected rain as it still lies in the field next day.

He went for it, and he got it right, I opened those bales for the calves on a daily basis later in the year and each one exuded the smell, and a moment, of a summer’s day into the cold winter’s mornings.

For me though, I had to master ‘rowing up’ next, putting the hay into narrow rows for the baler to pick up, using a hay turner on the tractor- another unfamiliar task. Tom parked himself inside the cab with me for the first couple of turns of the field and then left me to it while he set the baler up. I thought I was doing pretty well; there seemed so many things to get right all at once, turning the tractor just right to come straight on into the next row, controlling the speed of the rotors to be fast enough to move the crop properly, but not too fast that they smashed the hay up, lifting the rotors out at the row ends so that the row was finished but making sure you missed the ‘headland’ rows, that ran in concentric circles round the edge of the field, otherwise you’d fling random piles of hay into the clean spaces where there should be none.

Halfway though, I saw Tom walking over to meet me at one of the row ends- I was not dropping the revs enough each time I engaged the drive to the machine. Another thing to add to the list of things to do during the 10 second turn at each end of the field! I got there in the end and it looked okay, fairly neat and tidy I thought.

Another one of those smiles for me from Tom- “ yeah that’ll do” and he sets off baling- starting around the headland runs of hay that circled the edge of the field. I watched as the baler reached the first corner and then missed a whole swathe of my row on the corner, ...that seemed pretty careless... same on the next corner... and the next. Then I clocked ..... it was my corners at fault, I had turned too tight on each, making a sharp bend that was impossible to follow with the lumbering, unwieldy baler. Tom had been way too kind with his ‘that’ll do’. I spent the next 10 minutes dodging the baler’s circuits of the field, trying to push the recalcitrant corners into nice smooth curves using my hands and feet. It seemed to work and I gathered up the last few misses and stuff them into the main rows.

Another lesson learned.
Next
Previous