The Scent of Spring

A lovely spring smell is in the air which takes me back to the scent of grass and earth mixed together on a Sussex farm... 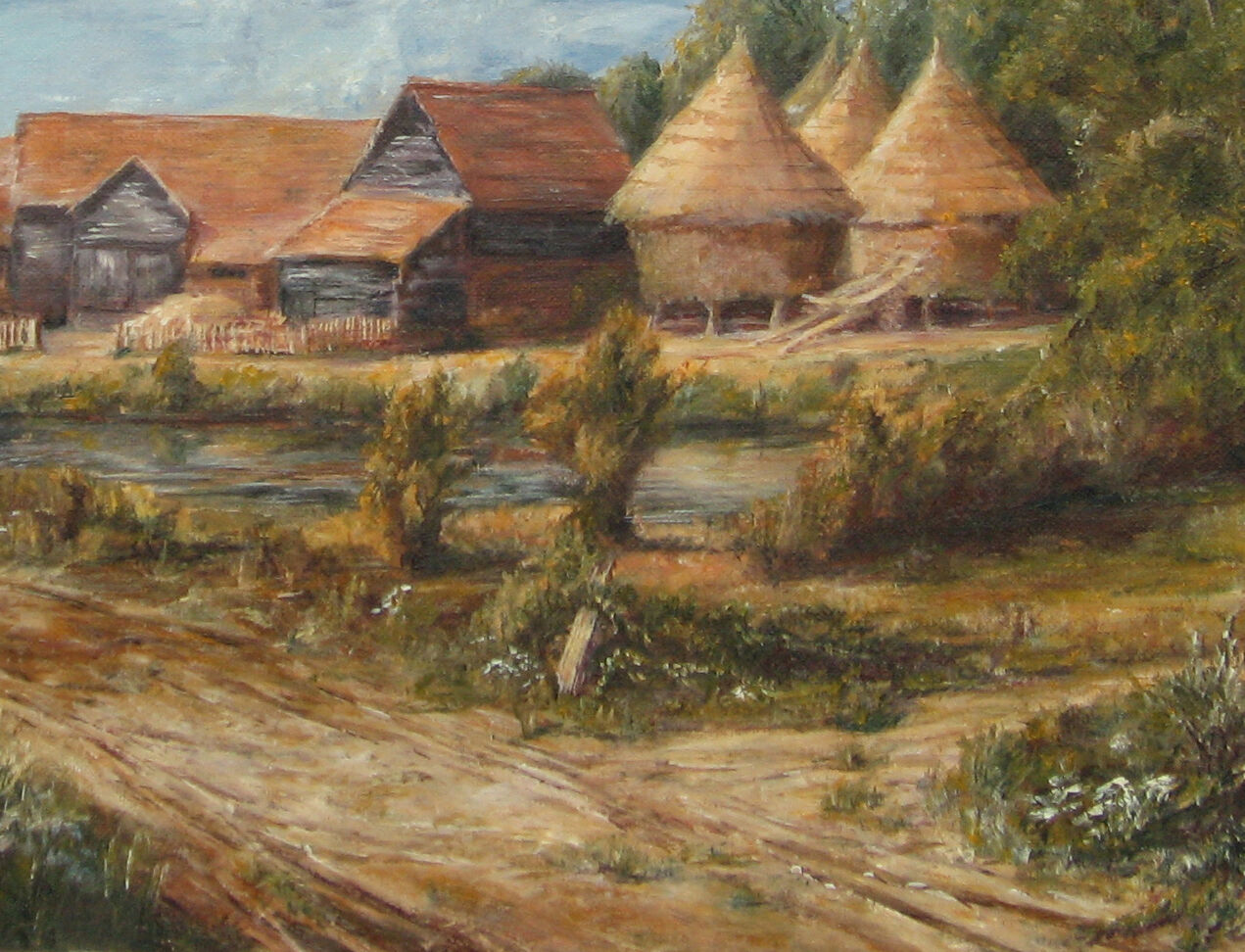 A rutted and pock marked muddy farm track from even longer ago, in one of my paintings.
Mid April and I saw my first swallow today. I’m very conscious that ‘one swallow doth not a summer make’, but hey, it does really help one believe that spring is definitely here, because there are days that make you wonder. The snow all around the other morning being a prime example of one.

I guess the abundance of spring flowers helps too, but the other day there was a scent in the air that I really associated with spring... the spring smell of earth.

Sounds odd, though many will know it. It bears a similarity to that amazing smell you get when it has been dry in summer for a while, and then it rains, thunderstorm rain, and seemingly from nowhere there is this indescribable smell; this scent of spring soil just rained on is very alike. It does somehow seem different though. Maybe it is the same, it’s just that in the dry of summer the experience of it is tied up with heat and dust, whereas in spring the scent has a cool and damp richness.

Why should this be a spring smell? There is definitely an earthy smell when one ploughs or digs in autumn or winter, but again, perhaps the sensation of it in those seasons is tied into either the damp mustiness of autumn or the biting cold of winter.

I think there might be another reason that it’s different in spring. At risk of sounding like some kind of perfume connoisseur on a hike, I think it might be that I’m picking up overtones of the scent of spring grass. Or maybe, I’m just colouring the smell with the feeling of being surrounded by spring?

If scents and smells are tied to seasons, then even more than this, they are tied to personal experience. They seem to be one of the most powerful ways to evoke memories of past things, seemingly long forgotten. Although it was the closely related sense of taste that launched Proust into his remarkable ‘In Search of Lost Time’ narrative, most will have at some point experienced that rapid internal transportation onto their own hidden memories through encountering a smell from the past: Someone’s perfume, school or hospital smells, fireworks or a particular drink or food.... suddenly out of nowhere you are almost there in another moment from another time.

Well for me that ‘Spring-earth-grass’ smell has some of that... there I am back on that dairy farm twenty-five to thirty years ago. Maybe part of the reason that smell is so evocative out of so many experienced on a farm (and there are plenty to choose from!) is because is it tied with a moment of revelation for me...

It was one of those little spring jobs, that had to be squeezed into the running of the farm. There seemed to be lots of tasks like this, little things, needing doing, that plagued the boss’s mind; each made a difference, albeit a small one, to how well the farm ran. (I came to see in time how all these ‘small differences’ added up to the cumulative effect of a well run farm.)

This job, like so many others there, ‘had its season’, or more accurately, its precise moment. On those thick Wealden clays, the soil moved rapidly from the ‘tractor bogging’ intransigent stickiness of winter to the hard brick like condition of summer in no time. Yet somewhere in between these states, there was a point when it was wonderfully malleable stuff, like Plasticene. It was just the state it needed to be, so one morning I was directed around to the back of one of the barns to retrieve and hitch on to the tractor (what appeared to me to be) an almost derelict implement that I had not really come across before: A disc harrow.

For those (like me then) who have never seen one, I can best describe this as a couple of large (and rather complex looking) frames, each carrying two sets of eight or so metal discs about 18inches in diameter; like a weird agricultural version of a giant draining board rack with 16 or so giant dinner plates left in it.

(Although appearing derelict, I later realised this was typical farm storage for this sort of machine that sits idle and then is needed for a brief moment in the year. I also realised after the job, when instructed how to ‘put it away’, that it wasn’t just dumped around the back of the barn in the nettles, but carefully dismounted onto blocks to keep it set right to pick up easily again next year and keep it off the ground to avoid the plates rusting away. I also was set to smearing the whole thing with grease and oil, thus ‘embalming’ it from the elements where it would stand for another year.)

The job in hand was to run this machine behind the tractor around all the dirt tracks on the farm, which were used to access the various fields by cows, men and machines alike. These tracks took a pounding over the year. Cows returning to be milked on a wet day would embed it with hundreds of small pot holes, each one a seeming potential ankle breaker, as they dried to concrete consistency in summer. Vehicles made tracks which, left alone, slowly deepened to ruts, with the same guiding power that a railway track exerts on a locomotive. Seemingly perhaps not a bad thing, until you wanted to take a different line with a tractor towing a large trailer, to avoid the trailer wheel cutting the corner and running into the ditch or gatepost, when these same guiding ruts rendered the tractor’s steering impotent.

The disc harrows were like a miniature, multi furrow ploughing arrangement. A remarkably clever machine in its simplicity, each disc cutting and turning a sod of soil a few inches wide, leaving a rough surfaced, but broadly level, inverted band of soil the width of the track behind the machine. A pass or two soon after with a roller flattened the whole lot back to a smooth and manageable trackway. Then as the ground hardened through spring it would more or less stay like that for the rest of the working season.

I set out down the first track with it roughly set up for me by the boss, and a quick explanation of how to alter it as I went to achieve the desired effect. The tracks were grass/ weeded over to varying degrees and in front of me lay these bumpy, pock- marked, rutty and weedy routes around the field edges. (I’m sure many a walker will have memories of having picked his or her way carefully across such a surface.) Behind me was this gloriously almost pure clean, earthy tilth, slightly roughened but level; a stark brown strip showing raw against the spring green grass of the field.

I had had no expectation of doing this job, or expectations from it, but I loved doing this work. The first thing to hit me was that ‘spring-earth-grass’ smell, suddenly all around, seemingly from nowhere.

More strikingly, it completely and instantly gave me an entirely different view of the farmed landscape around me. Somehow in my head, it had seemed to me that as these fields were grasslands, they must always have been grasslands. I had only ever seen them as such (the whole farm was under grass), and it never occurred to me that they could be anything but: it seemed like it must have always been their destiny.

Yet here was I with one pass in a tractor creating a most visible refutation of this, albeit only in a narrow strip across or around each field. But behind me was the whole implied possibility of other farming systems, other crops, wheat, oats, barley, roots and vegetables for these fields. In turn, this seemed to imply a wholly different possibility of landscape. All with one pass with this machine, and all surrounded by this pervading smell of chopped up soil and grass that followed in my wake.

To see and smell the change between the fixed greenness of a known pastoral landscape to the possibility of an arable landscape, two concepts which had before seemed entirely separate to me, was a revelation.

It is no wonder that that scent is so evocative of that spring day for me.
Next
Previous