A First Experience of Horse Ploughing 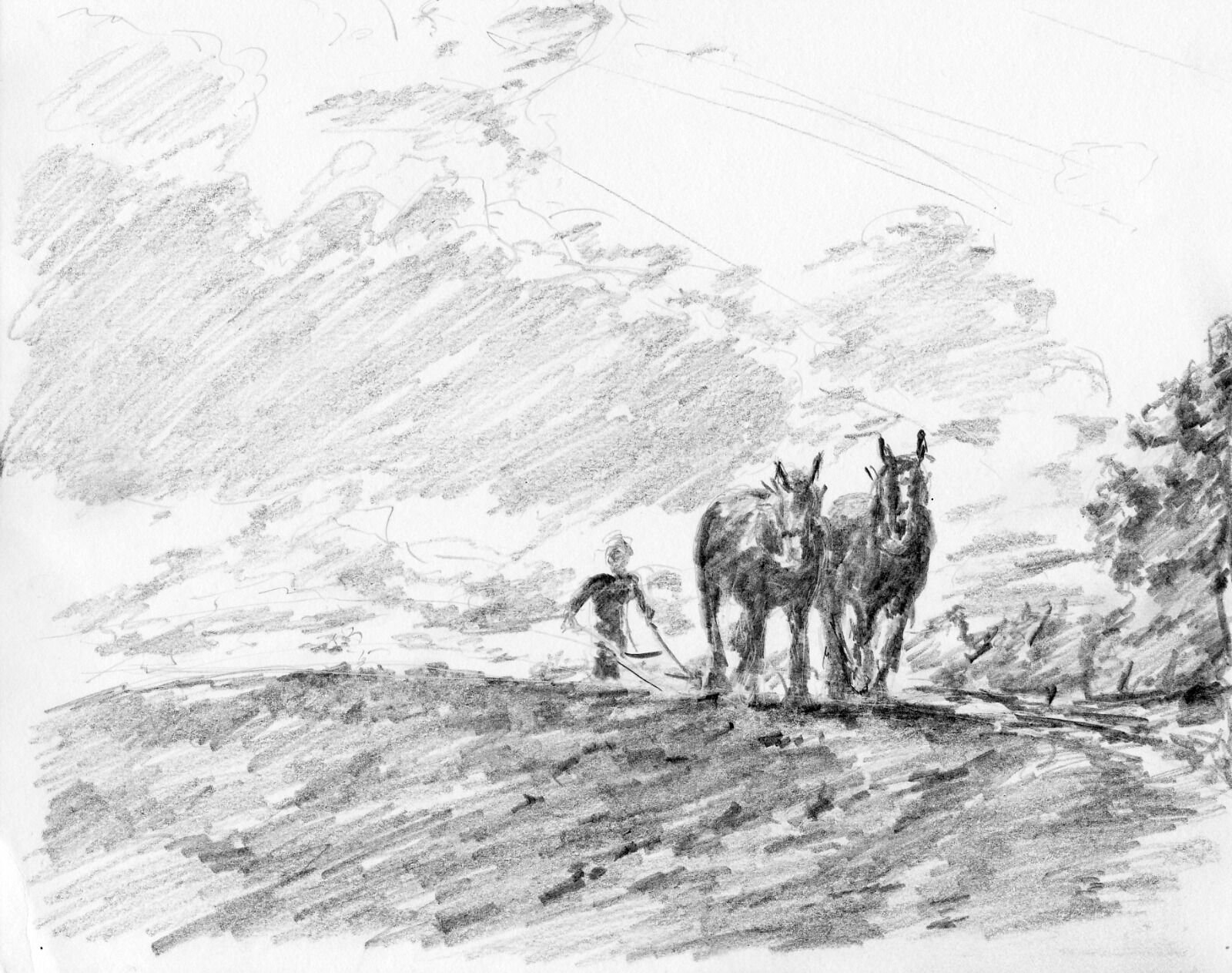 A horse ploughing sketch from a later date, that became the painting 'Opening the Ley'
I guess the process of turning the soil has actually held a long fascination for me. Years before the revelation of using a disc harrow the first time, on that dairy farm, I had watched the operation of ploughs in earnest.

Strangely, it was my art not my farming that first brought me up close and personal with a plough. In my late teens I took myself off, one autumn, to the Weald and Downland Museum at Singleton in Sussex, where there happened to be a horse ploughing day on.

It is a place I love visiting (in common with many other open air museums, but this was the one I found first). I relished the prospect of a day’s sketching around the old buildings, with the added bonus that I knew it would be great to watch some heavy horses in action for a while too. As it turned out, I was transfixed by the horse ploughing: there are very few other sketches from around the Museum from that day in my sketchbook.

It was the first time I had seen heavy horses at work. I sat myself at the top of the slope where they were ploughing and I spent a significant portion of the day there. I wanted to try to capture something of the powerful beauty of these creatures and of the seemingly effortless co-ordination between man and beast to wreak this ponderously slow and steady transformation of ground.

My fascination must have showed.

I had spent a fair part of an hour trying to get down on paper a sketch of a couple of Suffolk Punches at work. This was no mean feat: the constant movement of the operation tested my visual memory as I tried to fix the fleeting part of the image to the page. Then, as the team had just completed another turn at the headland near me, the ploughman turned to me before setting off again and asked if I wanted a go.

I couldn’t initially gauge whether or not he was serious. Having watched for most of the day, I had really began to discern how skilled these men and women were, despite how easy they made it look. So it seemed unlikely, why would anyone so competent and skilled want to (literally!) hand over the reins to me, a random boy, who was a complete stranger, without even being asked?

Assuming it was in jest and desisting with a very truthful “I couldn’t do that”, I found out rather quickly that the offer was entirely in earnest and that my objections were overruled by a distinctly modest- “It’s not that hard- go on”.

In fairness, looking back, I realise that despite leaving me holding the reins and plough handles, the horses were still entirely until his control, so coordinated were they with the sound of his voice commands. I dread to think how that one furrow in his otherwise perfect ploughing patch looked to him. Fortunately, I had not the eye at the time to determine good from bad ploughing.

The experience was mesmerising. I stumbled along trying to keep the plough vaguely straight and watching the ground in front bearing over in a smooth wave, changing from messy stubble to clean brown earth, with the sound of the harness and the smell of horse and soil pervading the air. It was one of those moments I shall always remember and I will always be grateful for the generosity of that gesture that day.
Next
Previous