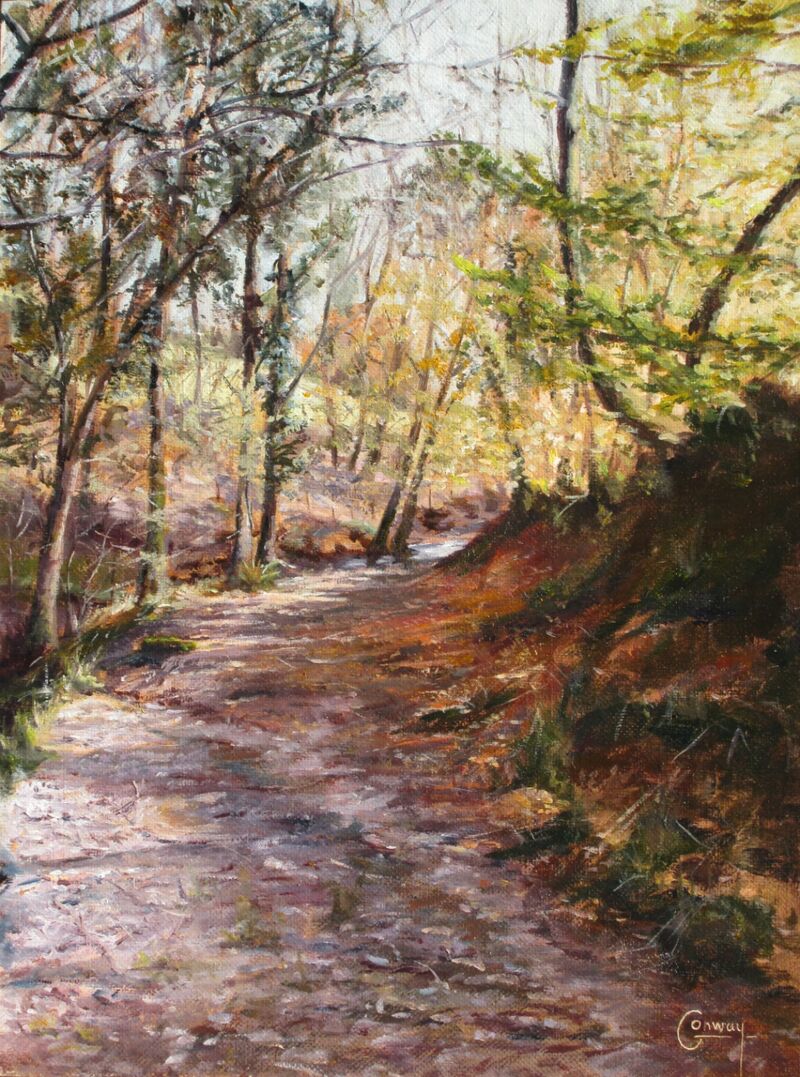 Glimpses from a Track

25/09/2020
Tracks seem to feature a lot in my painting...
...Maybe it’s not surprising. You could say it’s because they represent a really useful compositional device, always leading the eye on to what is ahead, suggesting the promise of more interest around the corner or over the rise. Banks and hedges provide interesting glimpses of foreground. Perhaps it’s also that we often see the landscape from the vantage point of a track, it feels familiar, real. It’s not like it’s just me either, if I think through a lot of my favourite Constable paintings, there we are on some kind of path or lane, or more often than not the towpaths that must have been so familiar to him.

I think that the lanes and paths in the art do something more for us. They define our relationship with our surroundings to an extent. We are almost by definition moving through them. Sure we might have stopped briefly to savour all that is around us, we may be working, moving around a farm, we might be on our way to a house, or a pub, or just on a leisurely stroll, but without doubt we came and we went, maybe once, maybe occasionally, maybe daily or three times a day. We pass and move on, the landscape remains.

But the track or lane bears witness. It is testimony to our passing through, and the last person who did and before that and so on. It wouldn’t be there otherwise, except for the repeated human need or habit of passing that point with a purpose. The more you look and think about it the more striking it is how hard and almost indelibly marked on the landscape these repeated individual gestures of activity and action are. In this little painting the track is scored down by eight or ten feet from the bank on the right. Human feet passing aided no doubt by water erosion, perhaps at some time reinforced by some actual digging to level out the path, perhaps it would be deeper but that stones have been added here to keep the level up. How long has this point seen us passing? Each of us moves through and by doing so leaves our tiny contribution to the definition of the track, following those that came before, guiding those who came after. Curving round the bend glimpsing the need to ford the stream ahead.

I don’t know the history of this little path. This point is a hundred or so yards from reaching a farm , and the path behind us has descended through a pretty valley from open hilly fields, it really just seems like it can only ever have been used by those in the farm to pop out and check on their sheep. Perhaps its history is more complex though. For on the uplands behind me runs a track that follows the hill tops. It seems that many of the really old roads round here were these. Exposed and hilly, but hard underfoot and easily followed, unlike the treacherous muddy and wet claylands in the intervening valleys. All the farms on either side of this hill have similar little lanes leading to this hill top track. They all have their main accesses now down into the tarmac valley roads, several of which were once turnpike roads.

Suddenly though I can see this landscape reversed, all these little lanes pottering up to the hill top track, left, it would seem on the day I passed, to the sheep and me. These were once the veins running from the hill top artery, the start of every journey to market, the way which the news came, the place to meet the carrier’s waggon for goods arriving, the hill top road where expected friends would come from and unexpected strangers would pass on their way elsewhere. Then the valley roads improved, easier not to keep going up and down the hills, but these tracks hung on for a while, with no improvement there was no onerous imposed toll to pay if you came this way, so they still played some of their old part. Eventually the tolls went (only after substantial fight and unrest to eliminate them), and the traffic of carts and carriers left the hill tops.

But the tracks remained etched into the hill, used to get around the farm, marked on a map for a walker to follow. There for someone like me, trying to grasp a new landscape that I have recently moved to, taking up the offer of the ancient right to ‘pass and re-pass’ along it and assimilating this little bend in the track with a glimpse of the ford ahead into my history, whilst my feet follow the lines of useful directions established long ago, and leave their own small addition to marking the way for the next who passes.
Next
Previous