The Farm Machine in the Nettles- Will it Ever be Used Again?

How the enigma of an old plough in the nettles led to an insight into the landscape all around and helped seed a lifelong interest in the significance of ploughs, ploughing and ploughlands. 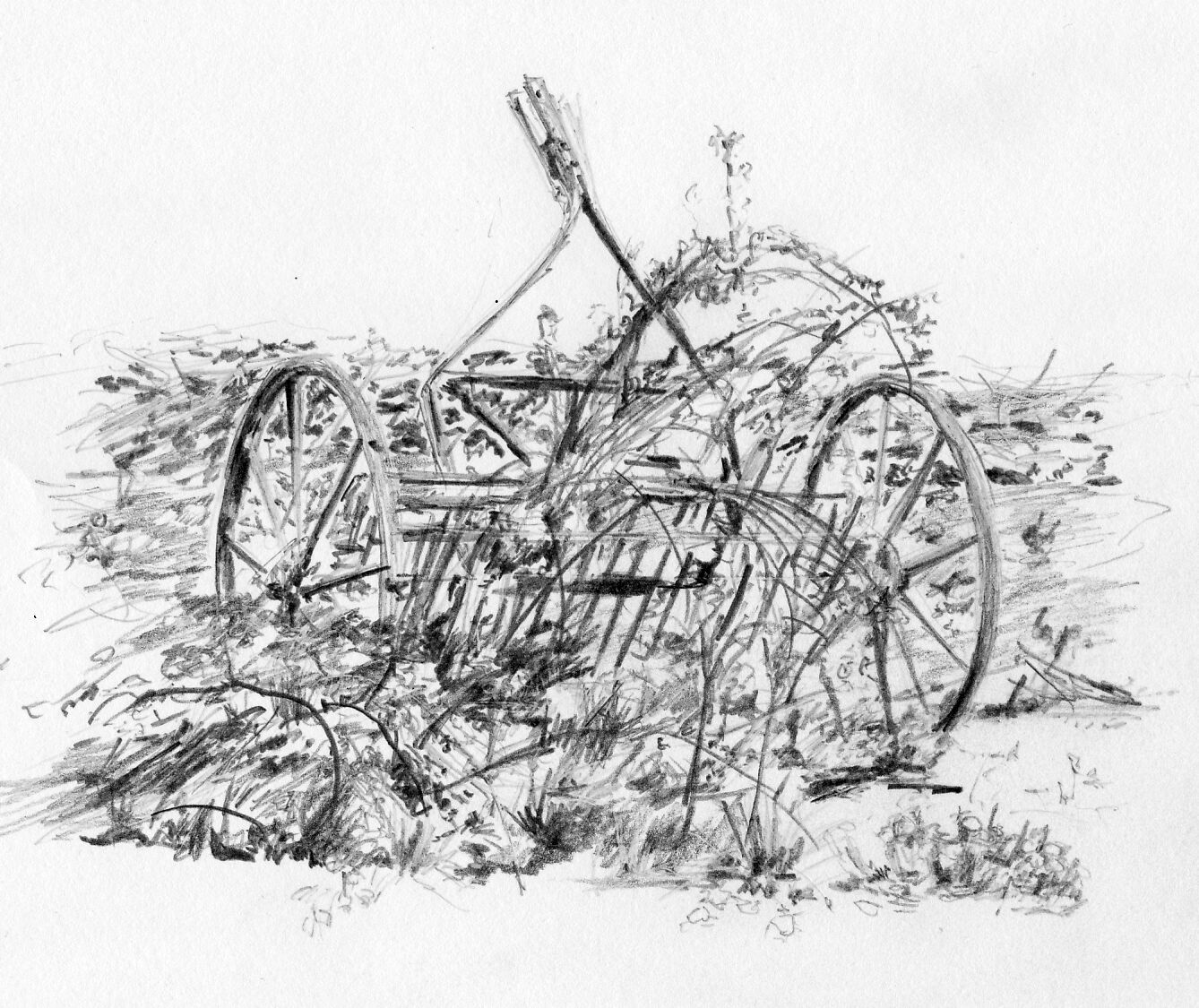 An old hay rake abandoned on a farm a long time ago. Did someone know when they last parked it up that it might never be used again?
Whenever I find an old farm machine laid up and looking left and unused at the edge of a field, or wedged, apparently abandoned, in the nettles in a farmyard, I always find it rather poignant. There was one particular plough that was one of the first to pique my interest in this way.

This plough sat, in that ‘left and might be abandoned, or just resting for a year or two’ manner in the corner of one of the yards on the first dairy farm I worked on, in West Sussex. (It was a 3 furrow reversible Ransomes it think, for those that are interested!)

After I had been there a couple of years and never seen it used, I asked my boss what he kept it for. He said there was no particular use for it anymore, but he wasn’t sure enough, that he might not want or need to use it again, to get rid of it. Pursuing the discussion further, he told me more about how the farm had been when he ran it in his earlier days there.

It rather confirmed the ‘vision’ of the place as I had seen it when disc harrowing. It had been a real mixed farm, part arable, part grassland. He grew wheat, oats and barley, kept pigs, dairy and beef cattle and had tried sheep but found them exasperating as they escaped the whole time!

Fields all over that ‘all grass’ farm had not so long ago been changing regularly between arable and ley (temporary grassland). As time had gone on though, he had felt the only way to keep it all making economic sense was to specialise. So, eventually, it had all been grassed down, and had become the dairy and beef enterprise it was at the time I was there in the mid nineties. The plough had been the most recent and last of the ploughs involved in operating this, and that it might not be used again was probably far from obvious when it was parked up.

I sensed a certain wistfulness in him as he told me about it all. I think if the economics were the same either way, he would still have been running the place as a mix of arable and grass. I think, perhaps, the retention of the plough might have been partly a way of retaining some kind of hope of having ploughed ground on the farm again sometime. Not perhaps in earnest, but to retain the possibility at least. Maybe to get rid of that plough would have symbolised a final break with a missed way of farming that he wasn’t ready to make.

I think it was probably a disappointment for me too. A growing appreciation of the subtleties of agriculture, the recent experience of having transformed a tiny part of the landscape ever so briefly with the disc harrow, an early taste of horse ploughing and now the appreciation of the significance of this old plough mouldering in the corner were combining to add up to a increasing fascination with the concept, practice and realities of ploughing. So much so, in fact, that ploughs and ploughlands have continued to hold a unique and enduring fascination for me throughout my life.

It seems I’m not alone in my interest. The number of ploughing matches of varying kinds held around the country alone bears simple testimony to the interest it holds for a large number of people. I never developed my skill as a practitioner of the art (and art it is), but have been fortunate to continue my relationship with this (literally!) ground breaking implement for a long time since that first taster at the Weald and Downland Museum.

I would go on to find myself using old tractor ploughs to work small fields in earnest, helping to organise horse ploughing demonstrations and creating a contextually authentic storage area for a small collection of horse ploughs, as well as becoming far more familiar with the role of this implement in inadvertently shaping so much of the British landscape.

All that was for later though. I never got to taste the use of a plough during my time there.

I did get excited briefly, when on the evening course on agriculture that I started doing while on that farm, our tutor promised to get a plough out for us to have a go with the following week. He did, but it turned out to be a bit of a disappointment as the session was just too short. We each just took a turn to pull a ten yard strip across a piece of waste ground at the college, with a quick verbal explanation of how it had been set up beforehand. Even a teacher and experienced farmer as good as he was could not have really passed on much grasp of the subject in such a short lesson.

It all continued to whet my appetite for ploughing though and had some part in leading me on to all those other plough related activities... but I’ll lay odds that there is still a 3 furrow reversible plough waiting patiently in the nettles on a dairy farm in Sussex.
Next
Previous